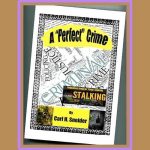 Growth of the surveillance state has produced a worldwide movement of fraught people who claimed they are being stalked, or gaslighted, 24/7. Read all about one Australian man’s claim.

In the liberties and rights business, you hear from ‘nutters’** quite a lot.

For the past two years I’ve had emails from a chap in Perth who says he is being systematically stalked by surveillance people at all hours, and harassed on the phone, day and night, including having his sleep consistently disturbed.

How am I to know, across a continent, whether what he says is true, or if he is a ‘nutter’?

If true, what can a civil liberties campaigner do about it? There could be real people invading his privacy, but we have little criminal law protection against anyone doing so surreptitiously, without physical contact, and no tort of privacy to be able to sue someone civilly, even if you can identify them. For either type of remedy, you have to convince a court of law, based on evidence, usually via the police. But how are police to nab people only you can see and hear?

As for hard and fast proof, people are usually unable to provide any, to me or to real, live police officers, or to politicians or ombudsmen or any of the dozens of people and bodies frequently approached by the stalked to try to find someone to do something about “it”.

How do you prove you’ve heard voices at night that no-one else does? How do you photograph people outside your home in the dark when neighbours don’t see anyone or anything? How do you record sounds only you hear?

One day, just recently, I responded to the Perth man for the fifth time and suggested he seek psych help to deal with the perception of being surveilled, or stalked. Whether or not he is being stalked, the issue is preying on his mind: he perceives it is happening, and maybe a psych could help him deal with the perception, real or not, I suggested. The cross-continent suggestion, of course, went down like a lead balloon trying to fly against the wind from east to west across Australia.

Lo and behold, the very next day, unbidden and unexpected, through the mail came a book about the very same issues written by man who lives not more than 20km from me on the east of the continent.

Called A “Perfect” Crime: Organised, Group or “Gang” Stalking, author Carl H. Sneider has delineated experiences very similar to those described to me from Perth. In about 256 pages of self-publishing,

Mr Sneider gives what he calls “A First-Person, Victim’s Report on Organised Groups Stalking in Australia”.

He says he is talking about:

He also says there are worldwide reports of this sort of criminal activity, and that documentary evidence of its existence elsewhere in the world is in abundance. Mr Sneider, an American-Australian, says there are multiple “Surveillance Role Players” – a job for which he has seen online adverts – on his case:

Now, I’m inclined to be a bit sceptical about all this attention on one “innocent” man, which Mr Sneider says he is: I’ve seen quoted that it costs the AFP and/or ASIO about $2m a year to mount round-the-clock surveillance on one Australian citizen, so anyone under real surveillance by our spooks would have to be a fairly high-priority target.

That surveillance cost estimate is probably without the:

“high-tech, electronic and/or ultrasonic, militaristic devices to attack from a distance with relative impunity and with target-specific effectiveness,”

that Mr Sneider believes has been used on him. The technology includes:

and microwave and radar scanners which can see inside the Sneider house.

Obviously, the nights in the Belconnen area of northern Canberra – a place usually pilloried for being dead as a dodo after dark – are abuzz with activity…but only Mr Sneider is experiencing it, apparently. He acknowledges that:

“…my neighbours are unaware of anything like aggravated organised group stalking is happening in our neighbourhood. So, there are no supporting ‘eyeball witnesses’ to the criminal activity, or sightings of perpetrators.”.

I could go on and on with a retelling of Mr Sneider’s claims: he does, for another 240 pages, which include about 150 pages of diary entries.

“..due to the near impossibility of proving precisely who, amongst the numerous offenders operating in teams, and rotations of squads, and use of advanced stand-off electronic warfare devices, is the person in violation of…statutes proscribing stalking, death threats, and threats of grievous bodily harm”.

Mr Sneider calls what he has experienced a “targeted” crime,

“nearly impossible or impracticable to prove who precisely the perpetrators are that it amounts to what is widely accepted as a ‘Perfect’, or unsolvable crime”.

The most interesting bit, though, is where he describes a trip back to the USA to visit his dying father in 2003. He admits to being “naive”.

“I had lots of baggage, and in some of those bags were heavy metal tools, camera gear, electrical gear and meters wires, long special welding rods spooled around inside the bags, computer disks and hardware and all that sort of stuff. It didn’t occur to me that the Transportation Security Authority could be really freaked out by some of the stuff showing up on the X-rays in someone’s luggage from a foreign country…”

Oh, and by the way, he started an argument with a TSA female operator at the airport; once in the USA, he headed for his booked reservation in a motel in Las Vegas that just happened – unknown to him – to be holding a convention of Muslims.

It appears that Mr Sneider believes the TSA airport woman “flagged” him on the US border watch list. Or maybe he got on a “to be watched” list because he wrote emails back home about the cheap little car he hired, calling it the “bomblet”…as one might, if trained in the Aussie lingo.

From then on, until 11 years later, Mr Sneider says he has been plagued by gang stalking, a term I’d not heard before Mr Sneider’s book arrived. But, apparently, there’s a mushrooming worldwide community of the stalked – the stalkees – according to CBS Atlanta:

A massive expansion of an online community battling what they call “gang-stalking” has occurred in recent years, with the spread of thousands of websites, videos and organized events for followers of the movement. Those who believe “gang stalkers” exist publicly and brazenly express their concerns that there is a systematic form of electronic and physical pursuit of “targeted individuals” being conducted by government and corporate entities.

No wonder I’ve avoided hearing about the movement so far: I saw the scary film Gaslight as a child, and have never been the same since. However people who like ‘far out’ tales, who like their reading noir, and who don’t have any trouble nodding off at night, might like to acquire a copy of ‘A “Perfect” Crime’

Is Mr Sneider’s tale true? I cannot tell, but I’m keeping an open mind, because…

There are more things in heaven and earth, Horatio,

Than are dreamt of …

…and that was before mobile phones, copious e-devices and spookware bloomed***.

Indian police have detained a pigeon that flew into a village near the heavily militarised border with Pakistan on suspicion it was being used for espionage.

They say they’ve X-rayed the bird after a villager spotted a stamp under its feathers that bore Urdu script and the name of a Pakistani district.

“We sent the bird to a polyclinic where X-ray scans were done to see if there is any spy camera, transmitter or hidden chip,” senior police superintendent Rakesh Kaushal said on 29 May 2015. “Till now there is no evidence to suggest it is a spy bird but so long as we are not able to decipher what is written in Urdu, we cannot be absolutely sure.” http://tinyurl.com/posyaw6

** Nutter: a crazy or strange person (not a ‘politically correct’ term). To that definition I would add that, in the fields of law, civil liberties and human rights, a person prone to writing copious volumes of never-ending text in which there may be the seed of a genuine complaint, but the kernel gets lost in the wordstack.

COMMENT on this article is closed. CLA does not work on “gangstalking”matters, or reply to emails or contacts to us about them.