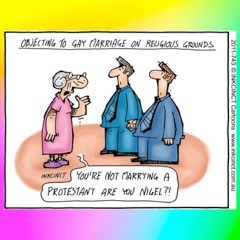 A same-sex marriage plebiscite could confirm an already-passed law.

That way would give the national vote real bite when we cast our ballots, says Tim Vines

If we’re to have a plebiscite, let’s make sure it will be worth the cost and pain. A plebiscite to confirm an already enacted same sex marriage law would be democratic, proper and – dare we say – innovative, writes Tim Vines of Civil Liberties Australia.

At the next election, Australians will choose how to resolve the question of same sex marriage.

Labor promises a free vote within the first 100 days of a Shorten Government. On the other hand, the Coalition has promised a plebiscite within a year of the election.

Reports that Attorney-General George Brandis will shortly release details on the proposed changes to the Marriage Act and statements by Coalition Senators that they would not consider themselves bound by an affirmative vote in a Same Sex Marriage plebiscite, highlight the need for clear rules around any national vote.

What would a YES vote for same sex marriage lead to? The next steps aren’t clear at all. Given a plebiscite costs an estimated $160 million, the uncertainly is not acceptable.

If a plebiscite is held, the outcome ought to be respected. Civil Liberties Australia therefore suggests that Parliament demonstrates its commitment to respecting a YES vote and make an Act of Good Faith on same sex marriage.

Rather than voting on how Parliament should vote on same sex marriage, the plebiscite becomes a de facto ‘popular referendum’ (technically an abrogative referendum) on a specific, same sex marriage law, which is already clear and known. People vote on whether they want to confirm the marriage law or stop it from coming into effect.

Popular referendums are used around the world for such social change, and are a form of direct democracy, giving more power to the people. Indeed, others have suggested such an idea as our Act of Good Faith.

Prime Minister Malcolm Turnbull might have had such a plan in mind when he said in Parliament that “The fact is that if the plebiscite vote is carried, same-sex marriage will be legal in Australia.” It is probably one of the options under consideration by the Attorney-General, having been previously raised by marriage equality champion Warren Entsch.

This approach has a number of benefits. Most importantly, it means the plebiscite result actually counts. A YES vote would trigger the commencement of the law and same sex couples could start marrying. While it would not be impossible for Parliament to nullify the vote, it would be unlikely. For the Prime Minister, who was never a fan of the plebiscite, it closes off a point of attack going into an election.

A number of objections will be raised to this proposal. First, some may argue that the Good Faith Act would ‘bind’ a future Parliament. In classical constitutional law, one Parliament cannot bind its successors: what Parliament makes, it can unmake. But ‘parliamentary sovereignty’ is not threatened by this proposal. While it would be extremely unlikely, a future Parliament could move quickly to pass a law repealing the same sex marriage law before the plebiscite or even after a YES vote. Although this would be politically inexpedient, the Parliament is not bound and no constitutional rule is transgressed.

Secondly, a technical objection could be raised as to whether the commencement of a law can be deferred in this manner. However, delayed commencement is not unprecedented. In fact almost every law has a delayed start date. The Acts Interpretation Act provides that, unless the contrary intention is expressed, most laws will commence ‘on the 28th day after the day’ the Governor General ‘assents’ to the law. Some laws have different commencement dates – they might come into effect as soon as the Governor General signs them, they might even apply to events that occurred before the law was signedl (retrospective laws) or they might only commence when and if a future event occurs, for example the start of an international agreement or, in our case, the declaration of the results of a plebiscite and notification of the results to the Governor General.

Finally, some politicians have expressed concern that a self-executing law proposal is an ‘ambush’, or would somehow ‘force’ MPs to vote for same sex marriage. Both objections are nonsense. First, how could politicians be ambushed by the issue of same sex marriage? In Parliaments and communities around Australia marriage equality has been campaigned on, polled on and voted on for decades. In the ACT it was even the law for a few days! Everyone knows it’s coming.

Second, Parliament would still have a chance to debate and vote on the enabling legislation. This vote would presumably be a free vote, so Senator Eric Abetz and his colleagues are not being ‘forced’ do anything. All that is asked is that politicians, having decided to abdicate their constitutional law-making responsibilities, actually respect the Australian people.

Technical objections aside, the question remains whether we should have a plebiscite. There are good fiscal, legal and welfare-based reasons why we should not. In fact a Senate Committee has already looked into these issues and recommended against a plebiscite.

For instance there is a real risk that a drawn out and virulent NO campaign will harm LGBTI individuals, especially young people. Second, there are a number of unanswered questions: will parliamentarians prepare official YES and NO material (as in a referendum)? Will, or should,) public funding be available and should it be equal for both campaigns? Should 16-17 year-olds be eligible to vote (as in the 2014 Scottish Independence Referendum) given they can – in some cases – already get married?

Given a plebiscite remains the most likely vehicle for delivering same sex marriage at present, we need to answer these questions. It is possible, however, that a successful plebiscite could lead to more innovative and democratic ways to debate and resolve big social issues such as drug legalisation, euthanasia or entering into controversial free trade agreements. But to be a success we need our politicians to put up or shut up and make an an Act of Good Faith for same sex marriage.