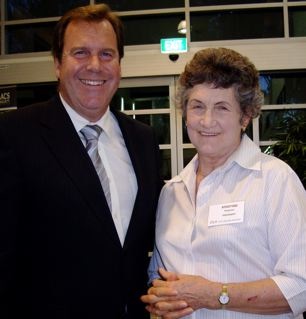 Attorney-General Robert McClelland encouraged Law students to get involved with community groups like CLA, and to put their opinions in writing right from the start of their studies when he spoke to the University of Canberrra Isaacs Law Society. He also supported mroe information exchange between civil liberties groups.

The recent appointment of Virginia Bell to the High Court paid respect to the community legal background from which she first came, Attorney-General Robert McClelland told University of Canberra law students in March 2009.

The appointment demonstrated that people could attain the highest legal office starting from the civil liberties/human rights sector of the legal fraternity.

The Attorney-General encouraged students to get involved in community activities: on campus, with liberties and rights bodies, speaking in public and the media, and particularly writing articles expressing their opinions.

“I encourage you to start putting yourself down in writing now, as a student,” he said.” I can assure you that, when it comes to evaluating who should be appointed as judges, one of the things we look at is their written work over their careers. It’s never too early to start.”

Mr McClelland urged students to argue forcibly, but always to respect opponents and to create good relationships with them. “Respect both your colleagues, and those whom you oppose: often, with difficult clients and cases, being able to work cooperatively will be an enormous help. Negotiated outcomes are always to be preferred to litigated outcomes.”

Mr McClelland spoke of his love for the law, and said that he would be happy, once his A-G’s and MP days were over, to return to practising law.  “The law is good training for all parts of life: it teaches you to think constructively and to argue rationally,” he said.

The A-G was speaking on 18 March 2009, at the Innovation Centre of the Uni of Canberra (UC), at a careers night organised by UC’s Isaacs Law Society.

It is one of many attendances at university forums throughout Australia by an Attorney-General who seems to be particularly committed to encouraging the next generation. Recently, for example, he attended the Equity and Diversity program launch at the University of Western Sydney. There he was able to view the CLA cartoon exhibition as he entered the vestibule of the event venue, thanks to the UWS Equity and Diversity chief, the former Human Rights and Equalities Commissioner, Sev Ozdowski, a CLA member.

Speaking directly with the President of CLA, A-G McClelland emphasised it was important for civil liberties organisations to keep each other informed of their initiatives and the responses to legal and parliamentary committee inquiries.