The current position with regard to a CCRC for Australia follows on from the setting up of the first such body 25 years ago.

The UK CCRC was established in 1997 with extensive powers and funding to investigate possible wrongful convictions. It can retain independent experts to help review cases and appoint investigators, including those who can exercise police powers; it has a statutory right to access any documents or materials held by any public or private body including forensic services, police and prosecutorial departments. This is important given the move to privatise forensic services in the UK.

It can, in effect, grant leave to appeal by referring cases directly to the appeal court to be heard as an appeal.

In the past 25 years, referrals by the CCRC have led to 535 successful appeals, mostly overturning convictions, but a few sentence referrals also. They include the overturning of more than 100 murder convictions, including the convictions of four people who had been hanged.

The initiative to set up the CCRC arose from the overturning of the IRA bombing convictions in the early 1990s – the Birmingham Six, the Guildford Four, the Maguire Seven and the Judith Ward case. 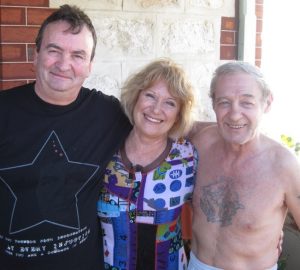 Left: Australian wrongful conviction guru (Button and Beamish cases in WA), Estelle Blackburn, with Gerry Conlon (G4) and Paddy Joe Hill (B6). When we hear the group names, we sometimes forget these are real, live people who have been locked up maliciously, wrongly and illegally by the state for years. – Ed.

The convictions had been obtained by what the appeal court described as false and fraudulent evidence. The scientists at trial had presented the results of preliminary screening tests (for nitro-glycerine) as if they were confirmatory. The appeal court, after 20 years, was informed that substances such as shoe polish, the nitrites in common soaps and the plastic backing on playing cards would also have produced positive results to the screening test.

This error was very similar to that which occurred in the case of Susan Neill-Fraser in Tasmania, where the results of preliminary screening tests for blood were presented as if they were confirmatory. Of course, with the added experience from the UK, and also from other Australian and Canadian cases, it is something which should not have occurred. That error alone would warrant her conviction being set aside.

Amongst the more than 500 cases identified in the UK as being wrongful convictions, the CCRC has identified gross failures of proper procedures in all aspects of police, forensic, prosecutorial and judicial functions. They include the police torturing suspects into signing confessions, expert witnesses providing evidence unduly favourable to the prosecution (each of which was clearly exemplified in the case of Treadaway in 1994), and a current surge of cases involving serious non-disclosures by the prosecution services – see The Guardian 31 October 2021 “Courts are close to collapse over police [and prosecution] disclosure failures” where it is stated that in the year ending June 2021 1,648 cases had collapsed in the UK due to disclosure failures.

The revelations around the recent Post Office scandal in the UK are most alarming. It has been revealed that the post office over the last 20 years had prosecuted some 700 people running post offices arising from theft or misappropriation of funds. The shortfalls had been revealed by the ‘Horizon’ software system which was introduced to all post-offices and installed and run by Fujitsu. When those accused of theft denied the offences, they were told they were the only potential offenders and the software system was reliable. At that time the post office officials knew that those representations were untrue.

The appeal court in the UK has begun to overturn the convictions, 39 in one case and 12 in another. An inquiry has been established to look at the human cost of this betrayal by this national institution – wrongful imprisonment, breakdown in marriages, loss of family and sometimes suicides resulting from what were known to be false accusations at the time they were made.

Without the investigative capacities of the CCRC, it is doubtful if many of these shocking practices would have ever been revealed. It is instructive to note that similar CCRCs have been set up in Scotland, Norway and most recently in New Zealand.

Canada has committed to set up a similar commission, and the inquiry into how that should be done asked us to contribute to their consultation. We recommended that they partner with university-based innocence projects to provide a presence in all states and provinces, and to significantly extend their investigative capacity through the use of student and academic researchers. The report forwarded to government has included this recommendation, in addition to many others which give greater priority to the possible wrongful conviction of people belonging to indigenous and other minority groups. It includes the recommendation to allow the Commission to overturn convictions without referral to the appeal court, a power currently capable of being exercised by the Attorney-General.

In South Australia in 2010 we introduced a Bill to the South Australian Parliament for the establishment of a CCRC. The Bill was referred to a Legislative Review Committee which sought public submissions on the issue. Bodies such as the Law Council of Australia, and the Law Society, and individuals such as Michael Kirby (former Justice of the Australian High Court) provided submissions strongly supportive of this initiative. This is the speech of Anne Bressington MLC who sponsored the Bill for us.

The Australian Human Rights Commission had also issued a report in which it stated, following our submission to it, that the appeal rights in all states and territories of Australia failed to comply with the International Covenant on Civil and Political Rights. The AHRC said that the appeal laws in Australia failed adequately to protect the right to a fair trial or the right to an effective appeal as guaranteed by the ICCPR [see para 6.2].

The LRC subsequently recommended there be established a body similar to a CCRC but restricted to the review of forensic issues, in addition to an inquiry into the use of forensic evidence in criminal trials, and the establishment of a new right of appeal.

The South Australian parliament did legislate for the introduction of a new right of appeal which subsequently led to the overturning of the conviction of Henry Keogh, who, it turned out had served over 20 years imprisonment for a crime which had never occurred. Clearly this was an important innovation being the first substantial amendment to the appeal rights in any similar common law country for over 100 years.

Following the introduction of the new right of appeal in SA, it was also adopted in Tasmania following an invitation by the Attorney-General for us to address the government MPs after a lobbying campaign begun by Civil Liberties Australia.

It was not surprising that Victoria also adopted the new appeal right after we had pointed out to the Attorney-General that without it, she would have to approve all of the referrals to the appeal court following the revelations about the ‘Lawyer X’ scandal.

It should be noted that Western Australia has a Bill before the parliament to implement a similar right of appeal, and we understand that there are moves in the Australian Capital Territory to make similar changes strongly supported by Australian Civil Liberties.

In a recent editorial in the Criminal Law Journal, Michael Kirby has called upon the remaining governments of New South Wales, Queensland and the Northern Territory to also implement similar appeal rights. He said:

Doing nothing to improve our institutional arrangements is a stain on Australia’s reputation as a country of equal justice. It is a blight that is too often demonstrated by fresh evidence and argument. It is an intolerable burden on thoughtful judges, prosecutors and other lawyers who regard participation in a demonstrable miscarriage of justice as a nightmare. The provision of redress is urgent.

However, as Michael Kirby has pointed out in his editorial, a new right of appeal without any capacity to investigate potentially delinquent cases is only a pyrrhic victory. Without access to transcripts, any ability to consult with expert forensic experts or to obtain legal advice, the chances of identifying wrongful convictions is almost eliminated.

It is instructive to note that in the seven years since the introduction of that right in Tasmania, there has only been one notable appeal and despite the clear manifest failures of that case, the state has been able to resist an effective review of it for many years. In South Australia, there has been on average just one application per year under the new appeal right.

Michael Kirby has championed the call for Australia to establish a single national CCRC which could review potential wrongful conviction cases for all states. As he pointed out:

What is it about our country that always sees us limping behind [UK, NZ and Canada] where justice is at stake, whereas we can move with astonishing speed to diminish civil liberties, increase official powers and raise levels of incarceration, with no parliamentarian raising a murmur…

It is clear that Australia must reform its approach to the possibility of wrongful convictions if it is to retain the confidence of the public in the judiciary and the legal system more broadly. We should take note of the establishment in New Zealand of a CCRC, and of the substantially revised ambitions of the Canadian government in its consideration of this issue.

We are confident that the two appeals currently seeking Special Leave to appeal to the High Court (Derek Bromley in South Australia, and Susan Neill-Fraser in Tasmania) will be successful and provide the occasion for us to contemplate the significance of the egregious errors which have occurred in both of those cases.

It was the Director of the World Bank who, some years ago, spoke publicly about confidence in the rule of law as being the essential underlying principle for a successful economic and political system.

It is clear that the rule of law in Australia has been severely damaged by the ability of various sectional interests to obtain and maintain criminal convictions which are clearly not in accordance with the relevant legal principles. For so long as we ignore or turn a blind-eye to such failures, we increase the risk that people will take the law into their own hands, and undermine the very peace, order and good government which we all desire.