Federal parliament is back after a nine-week break. And it’s looking a bit different.

Some MPs, unable to travel to Canberra for health reasons or COVID-19 border restrictions will participate via video.

It will be the first time MPs have been able to contribute remotely like this during a sitting week. This is a big leap for the parliament.

Federal parliament is adopting a hybrid model. Many MPs are still expected to attend the chamber in person. But others will be there via secure video link from their electorate office, with strict rules against slogans and novelty items in the background.

Those attending via video won’t be able to vote or be counted for quorums. But they will be able to ask questions in question time and speak as part of debates.

There will not be a free-for-all on the video option. As Attorney-General and Leader of the House, Christian Porter, explains, it will only be available to MPs who can prove the pandemic makes it,

essentially impossible, unreasonably impracticable, or would give rise to an unreasonable risk for the Member to physically attend.

The remote access will be via the existing system used for parliamentary committee hearings that frequently take place around the country.

Virtual parliaments around the world

This may be new for Australia, but it is not radical. Before COVID-19, other parliaments have been experimenting with remote proceedings and online participation.

Spain’s parliament has allowed remote voting since 2011 if people are seriously unwell or on maternity leave.

Brazil’s parliament – which covers a large geographical area, with more than 500 members in its lower house alone – had already begun using virtual discussion tools to conduct debates among MPs and between MPs and citizens. This is supported by an app, called Infoleg, which provides information on parliamentary business for both citizens and MPs and enables secure online voting.

Both Spain and Brazil were among the first parliaments to swap to hybrid and virtual sittings during COVID-19, thanks to their technical know-how and procedural flexibility.

The United Kingdom had introduced a CommonsVotes app, which shows how MPs have voted, following a division. There is also a HousePapers app which contains parliamentary papers.

The UK, New Zealand and Australian parliaments have been among those using video conferencing for committee work.

Question time is not the same

Despite some success, reconfiguring Westminster traditions into virtual parliamentary settings during COVID-19 has been challenging.

This is particularly so when it comes to facilitating the spontaneous scrutiny that should occur in question time. Or the visual drama that comes from voting together or calling a physical division.

The UK parliament muddled through its post-Easter 2020 sitting, using online voting, Zoom and Microsoft Teams in the chamber and pre-prepared questions for ministers. But it has since backed away from virtual proceedings, citing the need for a “proper level of scrutiny”.

But there are ‘real positives’

The response to UK parliament’s decision has been mixed. British Labour MP Chi Onwurah has spoken of the need to be there in person.

Video engagement is not the same as being there face-to-face with a minister. You also lose the spontaneity, because you have to put in questions five days in advance, so you can’t ask a question about something a constituent emailed you about in the morning.

On the other hand, the Electoral Reform Society, has argued there are “real positives” to virtual methods. Such as,

Less booing and jeering during Prime Minister’s Questions, the ability to call Select Committee witnesses from afar through video-link […] MPs from far ends of the UK noted that they’d be able to spend more time in their constituencies if they could contribute remotely, or that they could spend more time on casework if voting times were cut down through online voting.

The House of Lords library also suggests there was more debate.

Almost 1,000 more contributions were made during the interim virtual/chamber phase than during a comparative period at the beginning of the year.

There were also more contributions from female MPs. Women made up a “slightly higher proportion” of those participating in the virtual chamber, up from 31% earlier in the year to 35%.

Scottish National Party MP Kirsty Blackman also noted the remote provisions made it easier for MPs with disabilities to participate.

The big lessons from these experiences are very similar to those facing other workplaces.

That is, the need to be flexible and invest in suitable technology. This includes secure and individually verifiable voting apps – such as Infoleg – political discussion software and reliable, high-quality video conferencing facilities.

Australia’s parliament can do better (it needs to)

Long before COVID-19, researchers have been calling for parliaments to make better use of technology, to be more efficient and enhance the quality of public engagement.

A 2009 parliamentary survey of MPs found most spent between 5% and 10% of their time travelling. It is a common refrain of MPs they would rather spend more time in their electorates than in Canberra.

There is also growing acknowledgement travel and work requirements on our MPs – particularly in such a geographically dispersed country – are unhealthy and unreasonable. Travel time and time away from family has also been identified as a particular barrier to attracting more more female MPs.

There are challenges when it comes to “going virtual”. But by forcing our parliaments to experiment with new ways of operating, COVID-19 presents a critical opportunity to reimagine how our democratic institutions can work better.

If we embrace this moment with energy and enthusiasm, we can create new spaces for new voices (as well as better spaces for those we already have).

This might sound naïvely optimistic, but we have been here before. About 40 years ago, someone stood in a dry Canberra paddock and imagined 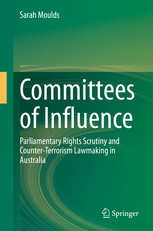 the light-filled, architectural wonder that is the current “new” Parliament House. And how MPs could be inspired by that environment to communicate their ideas with each other and their country.

Now, as we sit in front of our screens, we can begin to see a new parliamentary landscape. It might feel impersonal at first, but it has the potential to make parliament more user-friendly for MPs and citizens alike.

Dr Moulds is Senior Lecturer of Law, University of South Australia, and a member of CLA. She is a world authority on parliaments and committee systems. Her latest book, Committees of Influence: Parliamentary Rights Scrutiny and Counter-Terrorism Lawmaking in Australia (Springer) was launched in August 2020, This article appeared first in The Conversation: https://tinyurl.com/yy44ojk8 on 200824.