Death reigns from the sky when a king-like President Obama bypasses the rule of law for assassination by stealth using the world’s latest weapons of indiscriminate destruction.

Buzz presages death from the sky

Imagine walking in a street in your locality, standing in the school grounds talking to family members, when you hear a noise that human rights lawyer Geoffrey Robertson refers to as the buzz of death, like a motor mower in the sky.

In Yemen, Pakistan or Afghanistan, the “death mowers” from the sky are unmanned mini-aircraft fitted with bombs or rockets able to kill targeted people on the button press of a controller inside a CIA base in America, 12,000 miles away.

The unmanned drones originally aided reconnaissance or surveillance, but now those employed in the US “terror war” are fitted with hellfire in the form of laser-guided missiles.

The US agency which wages a horror war on civilian populations from remote, casuality-free bases in the US is the CIA, an intelligent service. It is recognised as non-combatant for the purpose of war law, and so does not demonstrate the transparency or bear the accountability obligation like other branches of the US government whose constitutional role is to kille people.

Because of the lack of accountability, it is impossible to know with certainly how many people have been killed or maimed by US drone strikes. One report in 2011, based on frontline war zone investigations, claimed that there had been 385 civilian deaths, which included 168 children. Other surveys suggest several thousand deaths with about 20% of them children.

The Obama administration permits the CIA carte blanche to choose targets and to carry out executions without even admitting that they the assassinations have taken place and that they have caused innocent civilian casualties. When operating in Yemen, those who press the hellfire buttons in Nevada do not pause to consider whether their targets are engaged in combat missions or not.

The battlefield utility of drone technology – currently in the armoury of 40 nations – means that both military and “spy” forces will employ drones widely in future conflicts.

Drones will become more compact, and more difficult to detect or shoot down: already there are plans for bird and even insect-size drones capable of crawling inside homes or squatting on window ledges to listen and send “kill” messages without the need for any “pilot” in Nevada to press a button.

People in several countries are terrified as the US drones menace their villages from above. In 2012 the Obama-authorised[i] 46 drone strikes (that we know of for certain) caused anger and a growing hatred of America. Villagers see and fear the drones, but any US assistance given their country is unnoticed by the local population, driven to distraction by the buzz of death above..

A UN team investigating casualties in Pakistan said that US drone strikes violated the country`s sovereignty; the Pakistan government claimed that such strikes by US drones have killed at least 400 civilians, and that many drone attacks are aimed at suspected low-level tribal militants who may not pose a direct threat to the US forces occupying their country.

Such drone attacks undermine the democratic, ethical and moral purpose so proudly proclaimed by their US operators. Where is the rule of law when one governments claims unreviewable power to kill anyone, anywhere on earth, at any time, based on secret criteria and secret information decided and delivered lethally in a secret process by unnamed, faceless individuals.

After the 11 September terror attack on America, the US began to launch drones from bases in Pakistan and Uzbekistan for combat missions inside Afghanistan. More than a decade later, after killing more than 5,000 people – many of whom were civilians, including women and children – the US has expanded the use of drones into Yemen, Somalia and Pakistan. As well, the US has set up drone bases in Djibouti, covering the Horn of Africa, and flies unarmed Reaper drones out of Ethiopia. Drones based in the Seychelles are used for surveillance flights over East Africa.

The RAAF has used dronges equipped with sensors and cameras to target anti-government Islamic fighters in Afghanistan, but there has been little public debate in Australia about their increasing use. Yet by their very existence, Drones bring a high level of terror and death to civilian populations.

The Stanford and New York universities 2012 study, “Living Under Drones”, estimated that of the total numbers killed, only 2% were high level targets.

Former Australian Prime Minister Malcolm Fraser is critical of US Presidents George W Bush and Barack Obama having unlimited war powers to unleash drone attacks on people living in countries with whom America is not at war. He says that the US Base at Pine Gap in central Australia plays a key role in US drone strike targeting, a fact mostly unheard of and largely unknown by the Australian people.

In the recently published fourth edition of his book “Crimes Against Humanity”, Australian-born international lawyer and judge Geoffrey Robertson calls for the US to make its drone operations more principled and transparent by adopting the following guidelines:

Robertson says: “Unless such steps are taken, drone killings will be correctly characterized as summary executions, and approval of them en masse may turn out to be Obama`s Guantanamo”.

[1]In the preface to the fourth edition of “Crimes Against Humanity” the author makes the telling point that in 2009 President Obama was awarded the Nobel Peace Prize, just as he was authorizing the CIA`s “drone war” to execute summarily several thousand unconvicted terrorist targets, and anyone else who happened, however innocently, to be in the near vicinity. 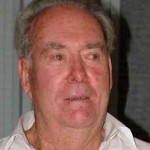 Keith McEwan is a member of Civil Liberties Australia. He has been anti-war since he saw the effect on returned relatives who fought in World War One. He is particularly against wars and weapons that indiscriminately kill civilians.