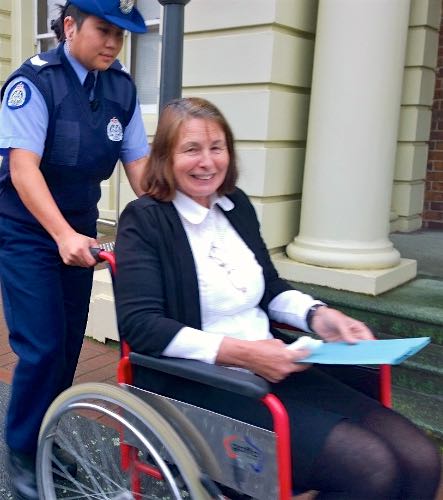 Sue Neill-Fraser (Sue, or SNF) has been in Risdon Prison for more than 12 years, wrongfully convicted – many believe – of murdering her husband, Bob Chappell.

He was alone on their yacht, Four Winds, overnight on Australia Day 2009 in Sandy Bay, Hobart, when he disappeared. No body has ever been found; cause of his assumed death is unknown.

For a decade, since 2010, SNF has been formally appealing her innocence through the courts.

In November 2021, the Court of Criminal Appeal of Tasmania rejected her latest appeal by a margin of 2-1. The one judge, Stephen Estcourt, ruled she was the victim of a miscarriage of justice: he proposed going back to the beginning, and holding a new trial from scratch/

This is a simple explanation of what is possible in 2022.

After that first, rejected CCAT appeal, in 2010, she tried to get the HC to hear an appeal, but it would not grant leave to appeal. That is, the HC refused to hear her case.

Basically, she is certainly permitted to TRY TO appeal to the HC again…but she may ONLY appeal on something that occurred during the recent CCAT hearings/rulings in 2021.

She can appeal by claiming that the CCAT was wrong in law or in fact in the recent decision-making by one or both of the two judges who comprised the majority.

Because judge Estcourt has dissented from the decision of the other two judges comprising the majority verdict, there may be enough facts, findings or interpretations in his judgement that would allow SNF’s lawyers to use those as a basis to appeal to the HC for a final determination on those issues.

Equally, there may be findings, statements or rulings made in the recent appeal by either or both of the two majority judges that could be challenged in the HC.

SNF is not permitted to re-run the entire original trial as the reason for a hearing before the HC, if it allows her leave to appeal. She has to appeal on one, or maybe a handful of, distinct points that arose in the recent CCAT case.

However, if the point(s) in question on which the recent two majority judges (Woods, Pearce) agree, were part of the earlier, relevant decision in the original trial, the HC could decide to revisit slabs of the earlier case. 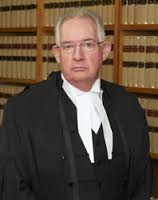 For example, Woods/Pearce ruled that a person called Meaghan Vass had to be believed when she denied being on board the yacht even though there was a very large volume of DNA evidence suggesting that she had been on board.

Estcourt (photo) believed the Vass DNA evidence was so telling that it was not possible for the DNA sample, at such large size (the size of a dinner plate”, courts have been told), to have been deposited on the yacht “from transfer by shoe”. Apparently, the shoe transfer was a possibility given in evidence and strongly promoted by the prosecutor that the jury may have accepted as part of its circumstantial case reasons: it is a possibility that Woods/Pearce appear to have believed.

(The key point here is that no-one – not the police, the prosecutor, the judge, the jury, or the appeal judges – is making their “guilty” decision in this instance on a point of law, but on a point of scientific logic).

The HC might find Estcourt’s logical argument more sound than that of Woods/Pearce (I think the HC should). This would be somewhat similar to what happened in the Cardinal Pell case  where the HC found – in very simple terms – that the evidence of many witnesses “as to opportunity” should have been given more weight, and Pell should not have been convicted on the evidence of one complainant.

When Pell appealed to the Victorian Court of Appeal, the equivalent of CCAT, he lost in a 2-1 decision also. When he got to the HC, he won unanimously.

But, HC cases can go either way. They cost a lot, and there is no certainty that the HC will even grant leave (give permission) to hear an appeal…which is what it denied last time, basically on another point about Vass and whether or not she should have been recalled by the original trial judge, Blow.

In the Pell case, the HC laid down a brand-new marker as to how much you could ’second guess’ the original deliberations of a jury. Until a few more cases based on similar issues get decided at the HC, we won’t know exactly how far the HC judges will want to take this new trend. SNF’s case, if she gets to a full hearing before the HC, might well be one of the cases that helps set the legal boundaries.

NB: Pell’s case was slightly different from Sue’s, in that he appealed to the HC on the basis that the entire decision of the jury was wrong, and that it could not/should not have come to its ‘guilty’ verdict on the basis of prioritising the evidence of one side of the competing witnesses.

Click HERE for a review of a book on the case by an investigative, ex-detective author. 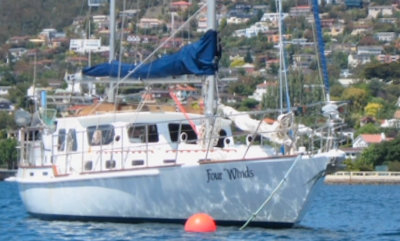 26 January 2009, Australia Day night: Sue Neill-Fraser’s (SNF) de facto husband of 18 years, Bob Chappell, disappears overnight when alone on a 16m motor-sailer yacht (photo) the pair had recently each paid $100,000 for. The yacht was attached to a mooring in Sandy Bay, Hobart, close to the Royal Yacht Club of Tasmania.

Bob’s body has never been found.

February 2009: Tasmanian Police decide, during discussion bandied around in internal squad room hypotheticals, that SNF is guilty. They then actively seek evidence to prove the theory they have concocted, making no effort to follow up other leads, such as from many yacht robberies in the vicinity, for example.

October 2010: After a four-week trial judge Alan Blow (now Chief Justice of Tasmania), sentences her – illegally, and in error or ignorance, as the first appeal court hearing ruled – to 26 years in jail with an 18-year non-parole period.

August 2011: The Court of Criminal Appeal of Tasmania, CCAT (basically, three other judges of the State’s Supreme Court) hears her appeal. One of those judges, Shan Tennent, had already made a decision in the SNF case before the original trial, and should not have been permitted to sit on the appeal, CLA believes (this issue has never been resolved. It could be that this first appeal was itself illegal).

March 2012, the first CCAT hearing denies the appeal, but reduces her original trial sentence to 18 years jail with 13 years non-parole period because judge Blow did not know, or misinterpreted, the sentencing rules. (It is not the only finding in appeals of Blow’s possible mishandling of the case[1]).

September 2012: The High Court (HC) refuses SNF leave to appeal the CCAT appeal decision/ruling. The HC retired to consider the matter for three (3) minutes before refusing to allow an appeal.

November 2015: After much lobbying, initiated by Civil Liberties Australia, a new law passes in Tasmania to allow a second appeal in a case like SNF’s, if ‘fresh’ and ‘compelling’ evidence becomes available. Such evidence surrounds a very large sample of DNA (“dinner plate size”) discovered on the yacht in 2010 and traced to then 15-year-old homeless girl, Meaghan Vass, thought possibly to be her vomit.

2016: Second appeal lodged. After much legal shenanigans (which included a judge who had to step down from hearings – Tennent again, because she had sat on the original appeal), the bid for a second appeal eventually starts the process of having its day in court.

Late November 2021: After taking eight (8) months to come to a decision, the CCAT rules 2-1 against SNF. Judges Helen Woods and Robert Pearce rule against her. One judge, Stephen Estcourt, believes she has suffered a wrongful conviction, and is entitled to a retrial (or to the Director of Public Prosecutions deciding he is not willing to prosecute her).