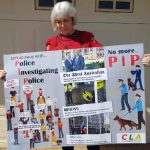 Police investigating police misconduct – and producing no case to answer, or a whitewash – is common throughout Australis. Paul Gregoire tells of some recent cases, and CLA provides some better ways of handling complaints against police generally.

The Institue of Public Affairs – Australia’s prime agency of the right – has an income of about $7m a year. including $4m in donations from the big end of town. It spent in 2020 just under $7m in pushing it point of view. And did so successfully, as former employees of the IPA now dot the federal parliamentary landscape, taking up influential positions.

It’s useful to review old critiques when new ones emerge, particularly to see if time has changed what’s important. Here’s a 2017 paper on integrity bodies. It suggests that, to secure funding against a recalcitrant Executive government, there should be a “special branch” of integrity agencies that get rum and rations directly from Parliament. What a good idea! Bring on a national ICAC with teeth.

CLA will appear before the Inquiry into Nationhood, National Identity and Democracy on Friday 13 November 2020. The inquiry is being held by the Senate Legal and Constitutional Affairs Reference Committee. In its submission, CLA has told the committee two initiatives are needed to win back the trust of the people of Australia in our federal parliament: a National Anti-Corrupt Commission, with robust powers to investigate the actions or inactions of politicians and bureaucrats, and a bill of rights to power to the people enforce their liberties and freedoms when government tries to take them away.

A recent explosive parliamentary committee report has revealed the failings of the UK’s security agencies in relation to tunnel vision. But no such close review, monitoring, questioning and analysis emanates from Australia’s equivalent parliamentary committee, the PJCIS, security specialist Dr Tony Murney says. Has the unrepresentative Australian committee fallen captive to local and foreign security interests?

Read full article
Australia’s parliamentarians are on trainer wheels as they enjoy the benefits of video meetings partaken of by the rest of the population for about six months. Parliament and committee expert Dr Sarah Moulds points out that Spain has been holding such meetings, and remote voting (which is still barred in Australia), for nearly a decade. Time Australia’s parliaments caught up, CLA says.
Read full article