What’s in a name? Some monikers make you green with envy. But the dangerous calling cards are those which lead to sticks and stones, Len says.

What’s in a name? That which we call a rose
By any other name would still smell.

By Len Green, a particularly pellucid member of CLA

Racism, rather like death and taxes, is always with us.

It is arguably connected with the instinct of self, survival, and identity, emanating from mistrust and/or jealousy of those not of one’s country, tribe or family. Even snobbishness is a subliminal manifestation of this condition.

Such attitudes have been and remain the basis of wars, conflicts, massacres and genocides. Certainly, many good people use words like Yank, Pom, Ruskie without intending to offend and some names are only mildly offensive. The Americans called Germans Krauts because of their supposed diet of sauerkraut. The Frenchcalled them Les Boche, an abbreviation of their argot alboche, derived from Allemand meaning German and caboche, head or cabbage. I imagine it is equivalent to dickhead. But other words and phrases really do indicate ethno-and-xenophobia.

Phrases that come to mind include: I’m not a racist but…, , go back to where you came from, some of my best friends are… , but you wouldn’t want your sister to marry one ….not one of us …, Furriner, ‘eave ‘arf a brick at im. There are other even more colouful epithets. And of course other languages have offensive terminology of which I am blissfully unaware.

The Aussie lingo is replete with abbreviations like ambo, avo, arvo, compo, garbo, journo, metho, muso, nasho, rego, smoko and troppo but Reffo and Abo are no-no. In this multi-cultured, enlightened wide brown land, it is now unusual to hear words like proddi, mick, dago, wop, wog, boong, chink, coon,hymie and so forth. And certainly not nigger or kaffir. I hesitate to document these names in print and would be horrified to have them dropped in conversation.

But does it really matter? *

The Latin, (masculine gender) word for black is niger and American slavers incorrectly used itas a noun rather than as an adjective. No doubt for the sake of euphony, the spelling became Nigger. Negro is the Iberian word for black and may have been introduced by the Hispanics who in turn are denigrated as spics.

The Latin word, masculine, for white is albus, Had the slaves been familiar with Latin roots, Negros could have called their owners Albos. Or biancos if they had a bit of Spanish. In the meantime, they accepted, indeed adopted, the word, often more descriptive than pejorative. For example, in 1943, Duke Ellington, a famous black American musician and composer presented at Carnegie Hall a jazzsymphony entitled: Black, Brown and Beige – a tone parallel to the history of the Negro in America. 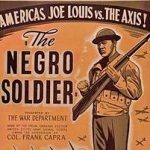 In 1944, Frank Capra produced a documentary film for the United States Army entitled The Negro Soldier. It was a tribute to the armed forces and civilians and Instead of depicting Negros as slaves or subservient, it showed them as lawyers, musicians, athletes and all together worthy Americans.

Ben Hecht, a white, American, Jewish literary, theatre and cinema figure co-wrote the second draft of the movie script. He frequently referred to Negros in his writings, but he supported the work of black writers and theatre; in an editorial note he wrote: This column is conducted by a Negro journalist. He wrote a story about a black cabaret singer entitled Queen Dido and republished it in 1962 in a memoir with a different title: The Negress. Ms Dido, the lady in question,referred to Ben as white man. Her girl friendwas white girl and most of the men were Negros. It seemed natural at the time. Hecht wasan early member of the Civil Rights Movement and campaigned against the Klu Klux Klan and similar bodies. Paradoxically, the N-word persists in historical contexts such as TheUnited Negro College Fund.

The 1927 musical Show Boat by Jerome Kern and Oscar Hammerstein opened with a black chorus singing: Niggers all work on the Mississippi. Niggers all work while the white folks play … In subsequent productions, niggers was changed to colored folk, or darkies. In the 1966 Lincoln Center production, this section was deleted.

In about 1931, two singers, Kate Smith (white) and Paul Robeson (black), separately recorded a song called That’s Why Darkies Were Born. Now, that’s a tough title to sanitize. And don’t talk about Gone With The Wind.

Carry Me Back to Ole Virginny, a popular song since the 1840s, was adapted in 1878 by James A. Bland, a black minstrel. In 1940, it became the official song of the State of Virginia, substituting Virginia for Virginny. In 1997 it was retired on the grounds of offence, no doubt because of the fourth line: There’s where this old darky`s heart am longto go –nothing to do with grammar.

Martin Luther King, Jr. in his 1963, I Have A Dream speech, uses the N word many times. Later that decade, Sub-Saharan Africans descended from slaves dumped it in favour of African Americans or Afro-Americans. This does not apply to white African migrants or blacks from other places, I suppose.

I am unaware of other continental drifts; white North Americans are not known as European or Occidental Americans, nor are those from Asia and the Middle East referred to as Oriental Americans. God forbid we should have Jewish, Muslim,Christian and Atheist Americans.

The word kaffir is also derived from slavery but in this case, the Arab slave trade. It is derived from the Arabic word kafir meaning infidel referring to black non-Muslims. Variations of the word were used in English and Dutch from the 16th century and adopted into Afrikaans. It was a neutral term for blacks In the former South Africa but is now regarded as highly offensive; its use is actionable in South African courts.

Finally, in this discussion of colourful language applied to people, one recalls how a mob of Europeans thought they’d landed in India but actually ended up in North America. Undeterred, the adventurers, somewhat red-faced, turned the other cheek and called the indigenes, Red Indians or Redskins. They in turn were categorised as pale-face.

Personally, I’ve no problem with skin colour and being rather colourless, I’d have no objection to being called Whitey, Albo, or even Bianco. However by virtue of my family name, some of my friends call me Verde. I know it’s Spanish and Italian but I prefer it to the Latin Viridis.

Be all this as it may, I’m reminded of the grand old man of Australian letters, Sir Walter Murdoch, who wrote an essay entitled The Pink Man’s Burden whereinhe described a class that believes there are two sides to every question: the mild people: the moderate people, whose colour is about half-way between the stainless white of the Tory and the vivid and flaming red of the Revolutionary; the pink people, in short.

Maybe I can be a pink person. The Latin word for pink is roseus. But I’d prefer Verde.

* Of course it matters!

The late Dr Herbert Freilich AM, endower of The Freilich Foundation at the Australian National University for the study, research and combating of bigotry and animosity, wrote: