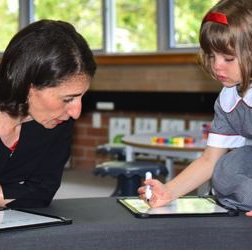 If there is one thing our politicians agree on, it is that Australia’s federal system is broken. A long succession of state and federal leaders have made this point, including most recently NSW Premier Gladys Berejiklian, who says the Commonwealth “needs a massive overhaul”. She wants “an honest conversation about our federation” and a new system that encourages states to pursue reform.

She has a point. Federal-state relations are driven by choices made in the 1890s in drafting the Australian Constitution. It sets down the powers of the Commonwealth and the states, and a host of other arrangements that govern their financial and other affairs. Many changes and workarounds have come into place since that time, but the underlying structure remains and continues to have a powerful effect.

Left: NSW Premier Gladys Berejiklian with a child from her electorate, as seen on her Home page.

The result is that Australia’s leaders must solve modern challenges such as globalisation and climate change according to rules made in the horse-and-buggy era. Not surprisingly, the result can be inferior government in which the best outcome is unattainable. Second or third-best solutions are common.

A good example is how our schools are funded. Unclear lines of responsibility and the states’ parlous financial position shape this debate in ways that override the needs of our children. Similar problems arise around our hospitals and other health providers. In these areas, government services are delivered at a lower quality than would otherwise be possible. And taxpayers’ money is spent in inefficient and wasteful ways.

These problems run deep, and usually lie outside the daily contest of politics. The current debate about school funding focuses on individual schools, while missing the point that the system itself is dysfunctional. The fact the Commonwealth generates the lion’s share of tax revenue, while leaving states largely responsible for public schools, sets up a series of distortions that promote funding inequities and poor outcomes for students. It is no wonder Australia’s position in the world education rankings is in decline.

Despite repeatedly acknowledging flaws in the federal system, our politicians have been unable or unwilling to act. The annual fight over each state’s share of $60 billion in annual GST revenue is a case in point.

A state that improves its economic performance can expect to receive less GST revenue from the Commonwealth. This year, Western Australia will receive back only 30 per cent of the money its residents paid in GST. NSW is on a similar path in receiving 88 per cent of its revenue back in the coming year, and could fall much further. In each case, the cost to the state budget is many billions of dollars.

The response of an affected state is inevitably to point out how unfair the system is, and how it penalises good economic management. The federal government responds with sympathy, and announces a review. This is opposed by those states that expect to lose money if the formula is changed. Sometime later, when the heat has gone out of the issue, the review puts forward changes. These recommendations are ignored, and the process starts again.

We have gone through this cycle three times in recent years. The Gillard government established an inquiry that included two former state premiers in 2011. The Abbott government followed suit in 2014 when it sought advice from the Commonwealth Grants Commission. Earlier this month, federal Treasurer Scott Morrison announced a major review by the Productivity Commission into GST payments.

‘Reform’ is a dispiriting cycle with square wheels

These processes mean we are not short of ideas about how the GST might be reformed. The impediment is that GST distribution is a zero-sum game. If the system is changed to assist one state, another will lose out. No federal government is prepared to bear the political pain of doing this. Instead, they manage the anger that boils out of an affected state by holding a series of unproductive inquiries.

This combination of frustration and inaction over the GST dominates the reform debate. A consequence is that larger problems are ignored or the subject of failed processes. For example, Tony Abbott came to office in 2013 having described the federation as our ‘biggest political problem’ and promising a White Paper on the subject. This process limped along, at a cost of more than $5 million, before being abandoned by Malcolm Turnbull. Since then, the federal government has lacked a plan for federal reform.

George Williams is Dean of Law at the University of NSW, and a member of Civil Liberties Australia. This article appeared first in Fairfax Media on 22 May 2017. http://tinyurl.com/me97mlw