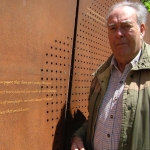 It was mid-morning on Easter Sunday when I boarded the bus at Castlemaine to travel to Melbourne. I would have preferred to go by train but, due to rail- track maintenance, buses were in service.

However, I was enjoying the journey until the driver turned on the bus radio and subjected his passengers to loud music and advertising comment right throughout the ride.

After meeting my daughter, Dawn, and grand-daughter, Yaulai, at Spencer Street Station, we travelled by tram to Fitzroy for lunch.

Whilst they had a ticket for the ride, I needed to purchase one, especially after being told through a loudspeaker that passengers could be approached by ticket inspectors in uniform or plain clothes requesting travellers to have a valid ticket.

No trouble, I thought as I handed my grand-daughter a $10 dollar note to insert into the nearby ticket machine, then to learn that only coins are accepted.  This information caused the three of us to search for sufficient coins without success.

Bring me soup in the lock-up

So there we sat discussing my likely explanation should I be accused of fare- evasion. I requested that soup be brought to me in the lock-up that evening and left it at that. Fortunately we alighted from the tram without the need to explain my infringement.

Walking along a main street in Fitzroy, I was surprised to see so many cafes and food outlets with shop fronts retaining features I was familiar with over 50 years earlier. Glancing down the side streets as we walked, I also noticed the small, once working people`s cottages that were still standing, with many showing that renovations had taken place.

However, it was the people in the crowded streets and eating places that caught my attention. Dressed in attractive clothing, people from many ethnic and cultural groups intermingled and strolled in and out of the shops, clearly expressing an atmosphere of contentment and enjoyment. This was more noticeable when we sat down to dine at one of the many cafés lining the street.

Thus, three members of one family spanning three generations, all atheists, sat down to celebrate Easter not needing a mythical explanation of why all men and women were brothers and sisters, as we each individually accepted that this was a natural human condition to embrace.

After we parted in mid afternoon and I set out to return to Castlemaine by bus to Sunbury and then on by train, I encountered on the bus a young man heavily loaded with a large back-pack and four single pieces of hand luggage .

He was studying a train timetable and talking in a foreign language on a mobile phone. After ending his phone conversation he asked me by gestures and  by mentioning Bendigo, to confirm that he was indeed on his was on his way there.

His English was very limited but when I learnt that he was from Taiwan I tried to use some basic Mandarin I had learnt 60 years ago while living in China, but to no avail.

As we alighted from the bus at Sunbury to await a train to take us to Bendigo, I learnt that the young man`s name was Benjamin and that he was a mechanic. He had flown down from Darwin that morning and was on his way to Robinvale, near Mildura, to pick and pack fruit. For this purpose he had a work/tourist visa.

In time, he explained to me that he was able to get a Sky bus from the airport to Southern Cross railway station and was being guided by a friend living in Robinvale.

However his journey was not straightforward as he needed to change from bus to train and then again from train to bus as he journeyed from Bendigo to Swan Hill and on to Mildura and Robinvale, with considerable waiting times in between.

As we discussed the situation while on the train from Sunbury to Bendigo, a mature-aged lady sitting behind us ventured forth and offered her help. Carol turned out to be a gem. She was also a resident of Castlemaine and, as I was to learn, a seasoned rail traveller who knew the train conductor and the Castlemaine station staff.

Once she realised that Benjamin had a three-hour wait in Bendigo before going on his journey, in the manner of a retired high school head mistress she set about arranging with the conductor and railway staff that Benjamin`s luggage be left at Castlemaine whilst she took him out for a meal and returned him in time to catch a later train to Bendigo.

Whilst these discussions were going on Benjamin would drift off to sleep,  causing Carol to comment that he must trust us.

I sat and admired Carol`s efforts to assist this young man`s lone journey from Taiwan to Robinvale so as to pick fruit in a foreign land.

As Easter is a time for us to reflect on the value we place on life, I was fortunate to meet with loving family members like Dawn and Yaulai and then with two strangers like Benjamin and Carol, confirming how easy and natural it is to love thy neighbour, no matter how far distant, as well as family members.

prefer old Women to young ones…they have more Knowledge of the World…their Minds are better stor’d with Observations…their Conversation is more improving and more lastingly agreeable…they study to be good…they learn to do 1000 Services…they continue amiable.”

Maybe when he becomes older, Benjamin will remember meeting Carol and will heed the advice of Benjamin Franklin when realising that he is “an incomplete Animal…He resembles the odd Half of a Pair of Scissors” and seeks a companion.

Note:  In my clumsy, unskilled way of conveying my odd impressions to you, along with some other friends, via email, please do not feel the need to respond unless you desire to do so. As I don`t get out and about much these days, this is my way of keeping in touch with dear friends.

*  Keith McEwan died on 7 April 2019, aged 93. He was one of the first people to join Civil Liberties Australia: he had an abiding passion for social justice. His reference to “learning Mandarin while living in China” alludes to the three years he spent secretly studying in China in the early 1950s as a member of the Communist Party of Australia. He wrote about it in his book ‘Once a Jolly Comrade’. For a potted version of Keith’s life, written by him to give to guests at his 90th birthday celebrations, email the CLA secretary.

His words are etched into steel on the walkway outside the National Library of Australia: “We read in the newspapers that there were young Aboriginal children who were not being adopted and would go into orphanages. So, against the advice of some people, we went ahead. We didn’t realise the identity issues that would arise.”