Civil Liberties Australia welcomes the decision today by the High Court in support of the personal freedoms of Australians.

Freedom of expression, including in the form of protest, is fundamental to a healthy democracy where ideas are contested.

The laws adopted by the Tasmanian Government were over-the-top and unnecessary and sought to stifle the rights of ordinary Tasmanians to protest about things that affect them and their communities. 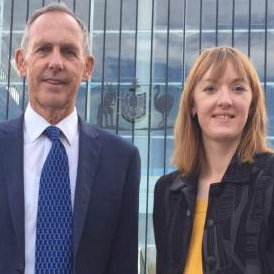 Photo: Bob Brown and Jennifer Hoyt…together, they took a challenge to the protest laws to the High Court, and won.

In striking down the anti-protest laws today, the High Court has illustrated the real need for a Tasmanian Human Rights Act (THRA).

If a THRA was in place in 2014 when the Tasmanian Liberals came to power after 16 years in opposition, they would have had a human rights benchmark to measure their policies against. The THRA would have helped the Government avoid the mess it finds itself in today. The new Cabinet developing the laws would have been able to assess the human rights implications and steer towards a safer model.

Instead of having the benefit of this advice early in the process, they now have the very public and very clear verdict of the High Court that what they did contravenes the right to political communication. Not only would a THRA protect the community from the excesses of government but it would help protect the government from itself.

The campaign for a Tasmanian Human Rights Act has attracted 890 Tasmanian signatures and the support of 19 organisations. The campaign will use the High Court’s ruling as a clear example of the need for human rights laws.

CLA calls on state election candidates to declare now that they will protect Tasmanians’ right to free speech by introducing a Human Rights Act in 2018.