Does the creation of a super Department of Home Affairs confirm our deepest, darkest suspicions of foreigners? Perhaps, but unfortunately it says more about what we are becoming as ‘securitised’ Australian ‘blackshirts’.

On 18 July 2017, Prime Minister Malcolm Turnbull announced the creation of a new Department of Home Affairs, that will combine security agencies – ASIO, AFP, Border Force and others – and Immigration. CLA has many specialists on security issues and I will leave it to them to critique potential human rights risks in relation to this super-Ministry. My question is why, oh why, is Immigration being included and how will the integrity of this department survive?

You can tell a lot about an oranisation by the way it sells itself.

During 2017, the Department of Immigration and Border Protection (DIBP) has issued 91 press releases. A third (34) concerned drug interception, another 14 detailed seizure of other illicit goods (tobacco, firearms, child exploitation materials). The Border Forces were active – 10 releases on illegal fishers apprehended; 6 about border patrols including international cooperation. Already two-thirds are about illegality and interception.

So how much publicity is being generated on immigration issues? In total 16 releases, but 12 relate to monthly statistics on “illegal maritime arrivals” (DIBP terminology for people, possibly fleeing persecution, who arrive by boat: UNHCR would call them asylum seekers; 2 on illegal workers. That leaves only one release on employer-sponsored visas and another about changes to visa processing.

Or have a look at their strategic vision for 2020. Mostly, and I do mean mostly, photos of black uniforms and borders. Only one photo of a child with citizenship certificate; one of a refugee and one of two happy young men who could be students or hi-tech workers. All are identifiably non-Anglo. 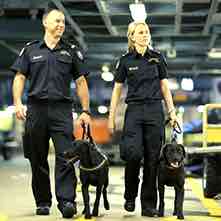 Even their dogs are black!

The other 30 persons, predominantly male, are Anglo looking; ostensibly work for DIBP and 24 of them wear the black shirts[i] of Border Force. Oh, and there is a cute and cuddly sniffer dog. The mission statement is ”protect our border and manage the movement of people and goods across it”.

Looking back to the annual report for 2012-13; the last year before amalgamation of immigration and customs/border force, the vision is very different.

Not only the slogan “people are our business” but a plethora of photos and stories of students, skilled migrants and refugees colour a weighty 300-plus pages. Even the staff focus is of an indigenous trainee working in Darwin.

Migration has been a cornerstone of the growth and development of Australia. With Canada and the USA, Australia has been one of the great immigrant nations. Argentina may have been a preferred destination for migrants at the end of World War 2, but it faded rapidly as an economic powerhouse, leaving the top three unchallenged.

Australia has wrestled with great issues of racism and white Australia policies (and continues to do so), but is today recognized as an outstanding example of harmonious multi-culturalism. Over half of Australians or their parents were born overseas. In addition to migration on the basis of needed skills, there has been, in all three countries, a component of humanitarian intake for refugees.

Now immigration requires security vetting, and there has always been a tension between the humanitarian and security streams in Immigration.

We would all accept that there needs to be adequate security measures applied to vetting temporary or permanent migration. However, the balance has clearly tilted already to security. To further subsume immigration with other security organisations in a Home Affairs portfolio leaves little hope that any autonomy of immigration will continue.

This is happening at a time when immigration urgently needs review. Permanent migration has long been vital to the story of Australia. From the arrival of early settlers to waves of post-war immigration, the symbolic moment of disembarking onto Australian soil is an image deeply embedded in our nation’s consciousness.

But today, there are more than million temporary migrants living in Australia. They work, pay tax and abide by our laws, yet they remain unrecognised as citizens.

All the while, this rise in temporary migration is redefining Australian society, from wage wars and healthcare benefits, to broader ideas of national identity and cultural diversity.

The treatment of asylum seekers and refugees is punitive and falls below the standards set by the Geneva Convention. While Australia’s sustainable population level must be considered, with the proposed merger, we will have a very secure state…by a new type of Australia where images of bars and guns replace those of children and families starting a new life in a land girt by hope.

* Jennifer Ashton worked with the UN High Commissioner for Refugees, for two decades operating from Zambia to Kazakhstan, including two years with UNAIDS in Myanmar and in recent years in Geneva to help kick start urgent refugee relief projects. Her career started with the then-AUSAID and with Australian NGOs (in Cambodia from 1986-1989, work for which she received an OAM). She has qualification in social work followed by a Masters-by-correspondence through Deakin Uni as a nightly respite from the harsh daily realities of remote refugee camps. She is a Director of Civil Liberties Australia.

[i] Apologies. The colour of the uniform, as described by Wikipedia, is ink blue. Reminds me of Quink ink for fountain pens – maybe we should call BP people the Quinkies.