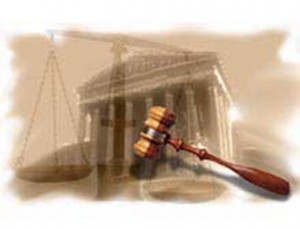 In the term “civil liberties”, “civil” refers to all the people, and “liberties” refers to rights, including the right to a fair trial.

While judges and lawyers tend to act as if the right applies only to accused, it clearly applies to all the people, not excluding victims of crime and taxpayers who pay the wages of police, prosecutors, legal aid lawyers, magistrates, judges, lawyer-politicians, legal bureaucrats, court staff, etc.

So what is fairness? According to Justice Russell Fox, who researched the law for 11 years after he retired from the Federal Court, fairness requires a search for the truth, otherwise the wrong side may win.

Lawyers did not defend criminals for five centuries after the common law began in 1166.

If a person was accused of something, a grand jury of not more than 23 local citizens (possibly biased one way or the other) heard evidence and decided by majority of at least 12 whether to put the accused on trial. At the trial, those present were accused, accuser, their witnesses, the judge and a smaller jury of 12.

Lawyers began to defend criminal in 1695 but conviction was fairly certain. By 1795, only 36.6% of accused wasted their money on lawyers. In the 19th century and a little later, 19 anti-truth mechanisms were added to the five already in existence. With conviction less certain, rich criminals found it worthwhile to hire lawyers.

Committal hearings began to take the place of the grand jury in 1848.

At a committal, the victim has to go in the witness box, but the accused does not, because of a lie by the first legal academic, a serial liar named Billy Blackstone.

Michael Edelson, an Ottawa lawyer, described the tactics at a 1988 seminar for lawyers. He spoke of “whacking the complainant” at preliminary hearings on sex assault cases. Edelson said: “You’ve got to attack the complainant hard with all you’ve got so that he or she will say: ‘I’m not coming back in front of 12 good citizens to repeat this bullshit story that I’ve just told the judge’.”

Lawyers are ethically obliged to even cross-examine child victims in a brutal and pornographic way. In a 1999 Four Corners report on sex crimes against children, Peter George noted a committal hearing in Queensland. The allegation was that a boy aged seven had been anally raped by the husband of his mother’s best fried.

The defence lawyer cross-examined the child for five hours, with breaks to stem the sobbing. He asked the boy questions about oral sex:

Have you ever seen this done before? – No.

Have you ever been in the house when your mother’s done this? –  No.

You didn’t tell the other policewoman the first time, did you? – No.

Well why are you crying if the story is true, John? – Cos you said it isn’t. …

See, I can stand here all afternoon and ask you all sorts of questions and until you tell me the truth I won’t stop …

At the trial, the jury found the accused not guilty.

A waste of time and taxpayers’ money

In theory, committal hearings “filter” out doubtful cases. That is, a minor judicial officer can remedy error by the Director of Public Prosecutions. However, as I noted in a previous piece (How to keep the Innocent out of prison, May 2013), the “filter” did not work for a litany of people wrongly committed and wrongly imprisoned, including Max Stuart, John Button, Andrew Mallard, Lindy Chamberlain, and the Birmingham Six. Not to mention scores of US citizens wrongly put on Death Row.

“The delays created by the committal hearing have also been experienced for minimal gain because the majority of cases that proceed through a committal hearing result in the accused being committed to stand trial.

“This is an outcome that is consistent across jurisdictions and one which has lent support to the abolition argument.

“ … the Northern Territory Law Reform Commission (NTLRC) found that in the 2007-2008 period, only two of the 267 accused persons who faced a committal hearing were not committed to stand trial.

“ … the [Law Reform Commission of Western Australia] review … recommended abolition. The review described the number of accused persons not committed to stand trial as ‘negligible’.”

Peter Faris QC told an international criminal law congress in 1996: “There is no justification for the delay and cost of trying issues twice. Committals should be abolished.”

Dr Flynn noted that “several international jurisdictions (including England, Wales and the Republic of Ireland) have ceased using the committal hearing [but] Western Australia is the ﬁrst and only Australian jurisdiction in which the process (referred to as the “preliminary hearing”) has been entirely abolished.”

*  Evan Whitton is a legal historian, a trade almost as rare as the pig-footed bandicoot. His Our Corrupt Legal System: Why Everyone is a Victim (Except Rich Criminals) fills a gap left by law schools; it details the origins and methods of the two systems. Dr Bob Moles, an authority on miscarriages, said the book “should be required reading on Introduction to Law courses in all law schools”. Victims can download it free from netk.net.au/whittonhome.asp and can republish extracts free. Also available at Amazon and books.google.com.au/ebooks.