Jailing up, crime down: citizens pay through the nose

By Stephen King, Adjunct Professor, Monash University, and Commissioner with the Productivity Commission

Across Australia, the rate of imprisonment has climbed by about 25% in the past decade, over a time in which the rate of offending has dived 18%.

How can it be that we have less crime but more people in prison?

This graph presented in the report uses homicides as an indicator of trends in the incidence of violent crime because almost all homicides are reported to police.

Homicides and imprisonment per 100,000 Australians 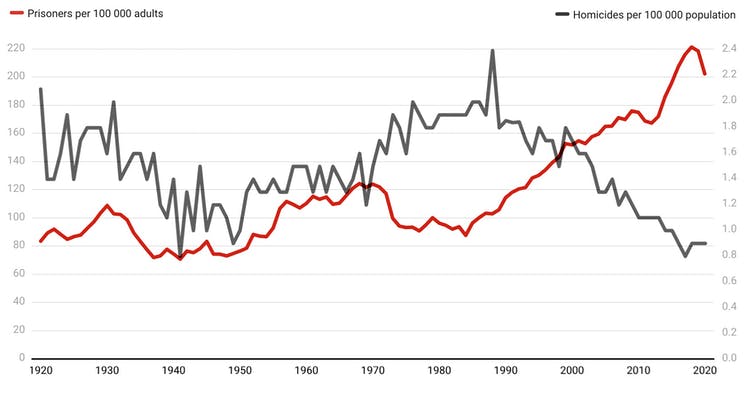 Number of prisoners per 100 000 population aged 18 years and over, number of
homicides per 100 000 persons. Productivity Commission

The apparent fall in imprisonment during the pandemic may not last. It appears to be due to COVID-related decisions to release more unsentenced prisoners on bail, and slowdowns in court processing during lockdowns.

One obvious – but incorrect – explanation for rising imprisonment at a time of falling crime might be that rising prison numbers are deterring crime. But the best evidence from Australia and overseas shows little if any such connection.

Another might be that “tough on bail” laws are leading to more people being held in prison awaiting trial. Even if some are later found not guilty or are not sentenced to prison, such a change could push up prison numbers while total crime is falling.

Or it might be that “tough on crime” policies are making us send people to prison for crimes that previously would have led to a fine or suspended sentence.

Or we might have increased sentences – imposing more time for the same crime.

Our research finds the correct answer is “all of the above”, with the key driver across Australia being changes that are “tough on crime”.

The biggest drivers of increased prisoner numbers across Australia are the chance that a person who is found guilty is imprisoned and the length of the term. Both have been increased by new policies that mandate prison sentences for certain crimes, eliminate suspended sentences, and make it harder to get parole.

The changes might be appropriate. Perpetrators of violent crime can destroy lives, and they make up almost 60% of the prison population.

Many of the repeat prisoners are stuck on a treadmill of prison, minor crime, prison with untreated drug or alcohol problems, untreated mental illness, and few if any employment prospects.

Locking up low level offenders just to have them churn through prison again and again is costly.

On average, we find imprisonment costs taxpayers about $120,000 for each prisoner each year. That’s about $5.2 billion in total.

We find that if Australia’s imprisonment rate had remained steady, rather than climbing for 20 years, the saving in prison costs would approach $13.5 billion.

And we find that if we could focus on alternatives for just the 1% of prisoners who create the least risk to society we would save about $45 million per year.

Australia already uses alternatives. Among them are home detention with electronic monitoring, and diversion programs where offenders receive community-based treatment for their addiction or illness.

The alternatives are cheap

These alternatives save money. Community corrections programs cost 1/10th of prison terms. They can also lead to better outcomes, for both the offender and for society, by getting prisoners off the prison-crime-prison treadmill.

They do heighten some risks, but a careful choice of the offenders offered the alternatives along with strong supervision using modern technology, and the knowledge that prison awaits those for whom the alternatives don’t work means the risks can be kept small.

This article first ran on The Conversation: https://tinyurl.com/ee9n98nv

The Productivity Commission will hold a webinar on ‘Australia’s Prisoner Dilemma’ on Friday 12 Nov from 2.30pm–4pm. Register here: https://kapara.rdbk.com.au/landers/ff30be.html

SOME snippets from the Productivity Commission report:

Prison is an expensive sentencing option, with expenditure per prisoner per day ranging from $294 to $559 across Australian jurisdictions in 2019‑20. The average daily cost of keeping an offender in prison is about 10 times the cost of a place in a community corrections program (chapter 3).

A third of the prison population is on remand, awaiting trial or sentencing. This proportion has almost doubled since 2000. The average time spent on remand has increased to 5.8 months in 2020 from 4.5 months in 2001.

In 2019-20, prison costs as a share of state and territory governments’ budgets were highest in WA and the NT.

Moreover — with NSW as an exception — the fiscal costs of prison have generally increased as a proportion of state and territory budgets over the past decade). This change has been more pronounced in the NT (where prison costs as a proportion of that Territory’s budget has increased from 2.2% to 3.2% over that time).

In December 2020, there were 18 000 people on parole in Australia (ABS 2021a), the highest number on record. The period before parole is allowable and the terms on which it is provided affect the total prisoner population because they can reduce the impact of the initial sentence length.

The use of parole varies widely by jurisdiction (figure B.9). The ratio of people on parole to the number of prisoners fell by a sizable amount in Victoria and the ACT and a smaller amount in SA and Tasmania between 2011 and 2019.

Although it is not possible to be certain, the increasing rate of recidivism could be indicative evidence that reoffending patterns are playing a role in increasing Australia’s rate of imprisonment. For example, from 2012 to 2019, the number of people in Australian prisons who had a prior spell of imprisonment grew by about 55% whereas the number of people with no prior spell only grew by about 36%. In NSW, a similar trend in reoffending increased the likelihood of a prison sentence, and placed upward pressure on prisoner numbers (Weatherburn 2020).