With tranches of new, freedom-curtailing terror bills passing parliament, making 65 new laws in the past decade, when will we get our first freedom-enhancing law?

Civil Liberties Australia, like many other civil society groups and non-government organisations, is becoming increasingly disillusioned by the current government’s – and parliament’s – approach to rapidly introducing and passing supposedly “anti-terrorism” laws. 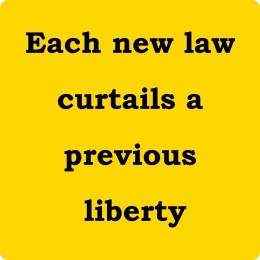 There is no reasonable time afforded to analytically assess just one piece of legislation, let alone prepare a well-reasoned response which draws on the experience and expertise of CLA members, all volunteers. In most cases, though, two or three or four bills are dumped on civil society in the last day or two of each parliamentary sitting.

The parliamentary committee process has essentially become window-dressing on the farrago of “community consultation”. “We’ve invited them to comment: we can tick the “consultation’ box” is how the government/parliament thinking goes.

The way Australians are being consulted on new laws is depressing, and becoming worse each year. Asking we the citizens to look at issues in isolation is crazy: we’re trying to stem a tidal surge of excess at one beach, while the entire coastline is being subsumed by a tsunami of inappropriate legislation.

Many of the existing laws have not been demonstrated to be necessary or useful, but the government and parliament are demanding that we justify why new, additional powers should NOT be introduced.  CLA believes that the government should deliver white or green papers, arguing convincingly why new legislation is needed, rather than assuming the expanded power bids of security and police agencies have become an implicit new “status quo” – even before being passed – that civil society must argue down. As in much new legislation, the government is simply reversing the onus of proof for what is required.

The process of consultation around bills of fundamental importance to the liberties, rights and freedoms of Australians is becoming so truncated that it is simply not physically possible for civil society, with most contributors working voluntarily in their spare time, to be able to give the bills any meaningful analysis. If this approach is tactical by the government, it is working brilliantly.

When will Australians be asked to comment on a new bill which “enhances” the freedoms of citizens, “facilitates” the opening up of police, security and intelligence records, ” de-tunes” the powers of the bureaucracy, and generally expands personal liberties and rights, rather than restricting them? There have been more than 65 anti-terrorism laws which have cut our liberties over the past decade at the rate one new freedom-restricting bill every two months?

Federal MPs are gradually creating the type of society where we the citizens will have to ask permission to take any particular action…rather than one where our parliament, our police and our security agencies are the servants of we the citizens. Our MPs should be focused on enabling us to work, rest and play in privacy, and enjoying our traditional right to freedom of association and communication.

We’re headed the wrong way because MPs concentrate on “facilitating” the wishes of spooks and police who want to restrict the rights of criminals (which terrorists are) in our society. Unfortunately, by pleasing the powers-that-be, MPs are snaring the liberties and freedoms of innocent Australians as a by-product. We citizens just want to go about our lives unmolested by bureaucracy.

Police and security agencies already have more than enough laws to catch criminals, including terrorists, as they have ably demonstrated in the past.

And please, some time in the next decade, can MPs pass just one law that gives the citizens of Australia a little more freedom, rather than passing another 65 new anti-terror laws between now and 2024 which curtail our fundamental rights and infringe our reasonable liberties. Ten years from now, few liberties will be left if the current trend continues.

We call on MPs to pass just one freedom law, please, to start with. A law which “enhances” and “facilitates” what it means to be an Australian, which gives us one or more liberties, freedoms or rights.

After 13 years of repressive laws since “9/11” surely it is not too much to ask for just one freedom-loving law in the next 10 years.