By Alex Newton*
A parliamentary inquiry in Australia is about to investigate whether we should have a slavery law and, if so, what form it should take. Alex Newton analyses the US and UK versions.

With an estimated 46 million people living in slavery around the world, and 90% of these victims being exploited in the private economy, it is no surprise that the pressure on companies to prevent and manage the risk of human rights violations in their supply chains is intensifying.

The critical legislation on this issue is California’s Transparency in Supply Chains Act 2010 (TSCA) and the United Kingdom’s Modern Slavery Act 2015 (MSA).

US federal legislation is also in the pipeline, with the Business Supply Chain Transparency on Trafficking and Slavery Bill 2015 currently before the House Committee on Financial Services. If enacted, it will require companies to make similar disclosures to those required under the TSCA.

However, at this stage, it is unclear how effective all of this legislation will be to combat the enormous challenge posed by slavery and human trafficking in complex, global supply chains that are often labyrinthine and dispersed in nature. 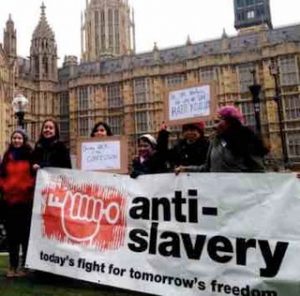 LEFT: Protest outside Parliament in the UK by Anti-Slavery International. It is estimated there are 13,000 slaves in the UK: pro rata, there would be about 5000 slaves in Australia. The Australian government is considering a new law to cover slavery here.

What does the legislation require? Who is affected?

Both the MSA and the TSCA require companies to report on the steps they have taken to eradicate slavery and human trafficking in their supply chains, or to disclose if they are not taking such steps. Notably, neither requires a company to report on the possibility of slave labour actually existing in its supply chain.

This was confirmed by a series of class action lawsuits brought in 2015 under the TSCA against Hershey’s, Mars and Nestlé. Finding in favour of the companies, the Court ruled that the law requires companies to report on their efforts to prevent slavery and human trafficking in their supply chains; not to disclose individual instances where they may have encountered it, to change their anti-trafficking policies or to implement policies if none are in place.

Which companies are affected?

The TSCA applies to any retail seller or manufacturer doing business in California that has an annual worldwide gross receipt of more than $100m. The MSA potentially covers any company supplying goods or services, operating in the UK with an annual global turnover exceeding £36m. Significantly, companies headquartered or registered outside the UK or California, respectively, may still have obligations under the legislation. While the TSCA affects about 3200 companies, the MSA applies to approximately 12,000 UK and non-UK companies. (figures in local currency in each case)

How effective are the Acts likely to be?

It is still early days, particularly for the MSA, as statements are only compulsory in relation to financial years ending on or after 31 March 2016. (The UK government encourages reporting within six months of the financial year end.) Nonetheless, serious concerns have been raised about whether it has real teeth. Section 54 of the Act says a company may simply state that it has taken no such steps if it chooses not to publish a statement under the MSA.

It is concerning that, of those companies that have published statements so far, many have failed to comply with the Act’s requirements. According to Ergon Associates, which analysed more than 230 statements by companies, about 40% have not been signed by a director and about a third cannot be accessed via a link easily found on the organisation’s homepage (both of which are required under the MSA). Also, there is no monetary or criminal penalty for companies’ non-compliance. Instead, civil proceedings for an injunction can be brought against a company by the Secretary of State.

The Business & Human Rights Resource Centre has created a registry of statements to benchmark companies’ policies and practices. Currently it contains more than 760 statements. Similarly, the TSCA has been criticised for lacking strength and transparency. It requires companies subject to it to disclose its efforts to eradicate slavery and human trafficking only in its direct supply chain. This obligation is more circumscribed than that under the MSA, and is likely to be a real deficiency given the dispersed and expansive nature of most modern supply chains.

Another criticism of the TSCA is that it does not specify how often a business is required to update its statement. Given the very fluid and dynamic nature of supply chains, this omission is problematic and is inconsistent with the well-accepted principle that human rights due diligence should be regular and ongoing. Further, it does not require that the names of the companies subject to it be made public.

In 2015 Know the Chain, a resource for businesses and investors to understand and address forced labour abuses in their supply chains, reported that only 31% of the corporations required to comply with the TSCA had a disclosure statement available that complied with all the requirements of the Act.

What does this mean for business?

Human rights violations in corporate supply chains are an expanding area of legal and reputational risk that business should seek to manage proactively.

While the MSA and TSCA have been criticised, they nevertheless have shone the light of public scrutiny on corporate supply chains and, in many instances, have highlighted abuses that were previously hidden.

Business should identify areas of particular risk for slavery and human trafficking; implement effective and ongoing human rights due diligence processes and remedies; and seek continuously to improve its oversight and understanding of supply chain risks.

* Alex Newton is founder and principal of a boutique consultancy, advising corporations, governments and NGOs on a wide range of matters related to responsible business, human rights, risk management and anti-corruption. alex@alexnewton.com.au
This article appeared first on the Ethical Corporation website: http://tinyurl.com/ze8uaw7
Parliamentary inquiry in Australia: Website: http://tinyurl.com/z9w29ju Submissions are due by 28 April 2017