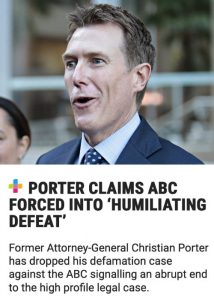 Minister Christian Porter, who sued the ABC and reporter Louse Milligan for reporting the fact that he had been accused by a woman, who had since died, of teenage rape 33 years ago, has dropped defamation action. He says that his dropping of the legal action which he initiated is a victory over the ABC.

Ah yes, says Civil Liberties Australia President Bill Rowlings, that would be the same ‘humiliated’ ABC which has lost the portfolio of Attorney-General; which was forced to take emergency mental health leave for weeks; and which chose a lawyer that a court ruled was ineligible because of possible perceived bias to act on its behalf. That would be the same ABC whose plan – baton in knapsack – to be Prime Minister of Australia is dead and buried. Poor ABC: is this what defeat of truth looks like?. (Screenshot is from from ABC’s report).

…to paraphrase Mr Porter (who was speaking about the ABC article, but he could have been speaking about his involvement in decisions to charge Witness K, Bernard Collaery, David McBride and Robert Boyle:

“It was sensationalist, it was one-sided, it was unfair,” he said.

“It’s the sort of (criminal charging by the AG) that any Australian could be subject to unless people stand up to it.”

Witness K’s sentencing hearing is on 17 June 2021 at the ACT Supreme Court.