The Queensland government has released the annual reports for 2019 of the state’s mental health entities…and they make harrowing reading. 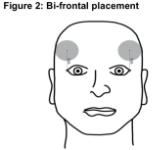 Even the illustrations used in guideline documents are a bit confronting (left, showing where to place electrodes).

What stands out across all the reports is the excessive weight of bureaucracy controlling a health issue: mental illness. In this case, the benefits of one prime treatment are highly suspect.

“I have said time and again that mental illness is simply an illness like any other – but no other illness has this bureaucratic industry associated with it,” Civil Liberties Australia’s adviser on mental health issues, Reg Murray, says after reading the reports.

The annual report of the Chief Psychiatrist including an outline of activities commenced in the 2018-2019 financial year.

The annual report of the Mental Health Review Tribunal including financial statements for the period from 1 July 2018 to 30 June 2019.

Murray suffers from bipolar condition, controlled with medication. During a period of severe illness in 1995 he was twice confined as an involuntary patient in the then Victorian psychiatric facility Larundel, now abandoned, where he was forcibly treated. He also has experience of voluntary treatment in The Melbourne Clinic, and is a suicide survivor.

“It comes across very much to me that mental illness in Queensland, as in other states and territories, is regarded as some sort of an offence rather than an illness,” he said.

“Of particular note are the electro convulsive therapy (ECT) treatments. ECT has come more into favour – or back into favour – in recent times. But application of ECT to involuntary patients against their will still smacks of the movie, ”One Flew Over the Cuckoo’s Nest”.

“They report that 500 ECT treatments were applied of which 88 fell into the emergency category.

“Could it really be the case that on 88 occasions in a year persons were so severely ill that they required ECT to save their lives, or to prevent them suffering irreparable harm? And to such an extent that their cases could not wait to be reviewed by the Mental Health Review Tribunal?

“The danger is that a culture has developed whereby maybe they just say: ‘Let’s get on with it – issue an Emergency Certificate’.

“It is interesting that neither Victoria nor the NT have this facility in their Mental Health Acts. It seems a pretty powerful facility and one might ask why other States and Territories don’t seem to need it.”

It is not clear how many times involuntary ECT happened in Queensland over the period. But the reports say:

“In some circumstances, emergency ECT may be necessary to save the person’s life or to prevent the person from suffering irreparable harm. In these circumstances, a Certificate to Perform Emergency ECT may be made for an involuntary patient which enables ECT to be administered prior to the matter being determined by the Mental Health Review Tribunal.”

“I find this very hard to swallow,” Murray said. “The number, 88, seems a hell of a lot of cases particularly if they are being administered against people’s will.

“It seems to me that having ECT done to you, particularly if it involves forced anaesthesia, could result in considerable psychological trauma. Such trauma might itself modify behaviour in a patient and that modification might then be taken as proof that the treatment was successful.

“Also of note is the very large number of absconders, 1041, required to be dragged back to facilities by force,” Murray said.

“Queensland has a mental health court which Victoria and the NT don’t have. This seems to deal mainly with forensic cases although it heard 35 appeals against decisions by The Mental Health Tribunal. No statistic is provided as to how many of these appeals were upheld,” he said.

For the record, CLA notes that the statistic regarding emergency ECT treatments is very concerning, as is the number of absconders presumably forcibly recaptured.

“There are other worrying, ‘alarm’ words used in the reports,” Murray said. “The records of ‘seclusions’ might bear examination, he said. The word ‘seclusion’ is a nice way of describing ‘chucking people into a three-metre square cell and locking the door’.

“At least Queensland is keeping records of these incidents: in previous years, in another jurisdiction, regulations required records to be kept but they were ignored.

“It would be interesting to know the breakdown of indigenous people being secluded and whether seclusion is being used to control genuinely violent patients or as a method of inducing compliance with a treatment regime.

“Involuntary patients quickly learn that it is preferable to front up to the nursing station and take medication rather than being held down and injected with it and then locked up for a few hours.”

With an increased awareness nationally of the need for more funding of mental health treatments, there needs to be a campaign to wear down the prejudice against mental illness which separates it from general medical conditions as somehow different.

The special state and territory legislation which governs mental health is draconian.

Even Queensland’s ‘Guidelines’ document for those administering ECT is worrying. it says:

5.1 Role and membership of an ECT quality committee

While the document gives seven other matters that the committee oversights (including training people and maintaining standards), the first and primary supervision requirement is over “adverse incidents” and “critical events”. This strongly suggests there are many adverse and critical occurrences with ECT mental health treatments in Queensland.

Evidence shows that while some consider ECT to be beneficial, others reported feelings of shame, terror and distress, and an invasion of personal autonomy, especially when administered without their consent.

Here is a clear admission by the Qld Health Department and government that involuntary ECT – frequently, and perhaps in most cases – involves shame, terror, distress and an invasion of a person’s rights…”especially when administered without their consent”.

Certainly, the violence of electric shocks would not help the above feelings:

Supporting the patient’s chin and using an effective mouthguard is essential during the procedure as the jaw clench resulting from the seizure is not abolished by the muscle relaxant. It is dangerous for a Guedel airway to be in place while stimulus is applied since it concentrates the force of the jaw clench over a limited number of anterior teeth. An effective mouthguard distributes most of the pressure over the posterior teeth which are better able to cope with the force.

The health department/government’s formal “Guideline” indicates that medical practitioners administering ECT have little, if any, precise knowledge of the effects of it, CLA believes:

20. Frequency and spacing of treatments

ECT is usually given two or three times a week. Treatments should be spaced as evenly as possible across the week. More frequent treatments may increase the occurrence of adverse cognitive effects without affecting the speed of clinical response, so are usually contraindicated.

Evidence is limited on the relative benefits of twice compared to three times per week treatments.

22. Determination of an adequate seizure

It is unclear, based on current evidence, what constitutes an adequate seizure.

These statements in 20 and 22 strongly suggest that no-one understands how ECT works, if it does work. For example, giving ECT “usually” 2 or 3 times a week involves a treatment regime 50% different, from 2 per week to 3 per week.

CLA notes that is extraordinarily imprecise for a medical procedure involving “electronic” doses. For example, it is not likely that radiation doses given in cancer treatment would suddenly jump up by 50% from one week to the next.

The administration of ECT is to create a ‘seizure”. With the formal guideline document admitting that no-one knows what an “adequate” seizure is, it is quite extraordinary that a dangerous, violent, intimidating, psychosis-inducing medical treatment would be forced on people who are ill when no precise or measurable benefit can be determined.

If ECT works, doctors, the Queensland Health Department and the Queensland government don’t know how it works, don’t know how long to apply it, don’t know what frequency is appropriate (in both time and electricity terms) and don’t – and cannot – know in advance what particularly impact it will have on a patient. In fact, the impact may be totally deleterious, in that it causes psychiatric damage.

It is not customary for governments to force citizens to do things which may harm them in many cases.

And, even the health department/government ‘guideline’ paperwork is suspect. The formal, signed-off date of the Guideline is reported:

Apparently, the Guideline document was NOT in existence for four months in 2017 while practitioners were forcing involuntary patients to undergo electroconvulsive therapy.

Publication: Guideline: The Administration of Electroconvulsive Therapy, Sept 2018, published by the State of Queensland (Qld Health).https://tinyurl.com/y4hmtoy4 or https://www.health.qld.gov.au/qhpolicy/html/index-m.asp