19 Aug 2017: Round about 50 were there in the little park outside the Tasmanian Parliament. Mainly locals, some from elsewhere in the state and one from the mainland. 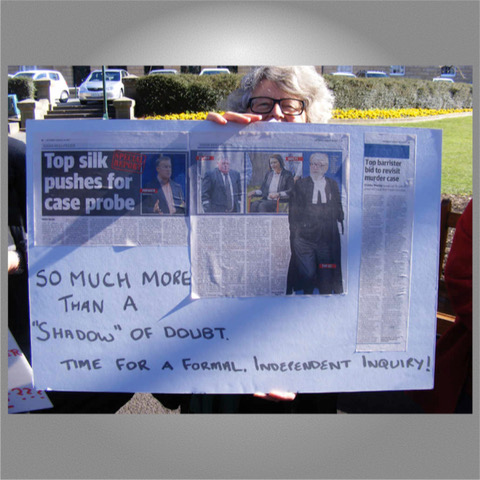 It was the vigil for Sue:  Susan Neill-Fraser, who has now been eight years in jail, convicted of the murder of her partner, Bob Chappell, who disappeared from the Four Winds yacht on the Australia Day of 2009 or in the early morning following it.

This vigil had been on my ‘appointment’s list for two months or so, and I was pleased to catch up again with supporters of Sue down in the ‘teeth of winter’, with the snow on the mountains around Hobart quite widespread (I’m from the north).

Photo: Protester’s sign with the latest news…and a call for an independent inquiry. (Pic: Garry Stannus)

Below the mountain, it was ‘Salamanca Saturday’, and the business of the market went on nearby as it always does, rain, hail or shine. We were not there for any reason other than to acknowledge the weight of the eight years so far, the weight shared variously, of Sue Neill-Fraser’s imprisonment and we were there to affirm either or both of two issues:

That trial was conducted in the court of the (then) Justice, Alan Blow. Alan Blow is now our state’s Supreme Court Chief Justice. Also, he served as our Lieutenant-Governor and in 2014 briefly assumed the role of Governor of Tasmania following the sad death of widely respected Governor Peter Underwood. Peter Underwood too, had been a Chief Justice of our Supreme Court.

I belong to a group of Tasmanians who do not claim to know all the facts surrounding Bob Chappell’s disappearance from the Four Winds in January 2009. We regard ourselves as ‘Supporters of Sue’ because of the perceived defects in her trial. With the deadweight of legal momentum, those defects persisted to her appeal, then to her application for leave-to-appeal to the High Court.

This ‘deadweight of the law’ continued further: when the Coroner was asked to further examine the circumstances of Bob Chappell’s disappearance. Without commenting on the quality of Coroner Hay’s report, I note that the Coroner drew attention to the legal requirement to make findings that were in accord with those of the original trial. Checkmate!

Euchre is a card game in which one suite always wins. In the case of Bob Chappell’s disappearance, the legal/prosecutorial apparatus has always held the trump cards, able to ‘trump’ anything that is presented to it, reaching into the chasms of precedent when required, and seemingly overlooking it when not.

So all ‘Supporters of Sue’ believe that her trial miscarried.

Here is not the place to ask whether Alan Blow wisely – or properly—exercised his legal discretion in refusing to allow that a certain witness to be recalled. However, here is the place where we state that Susan Neill-Fraser had a right to a fair trial and that there are persistent grounds for believing that she did not receive it.

Eight years in … Justice Blow gave her 26 years … which got reduced to 23. Sue maintains her innocence which means she’s got another 15 years behind bars to go.

Confident that justice has taken place?

We in the community have a right to be confident that justice has taken place. We have a right to know when someone is imprisoned, that they have been justly convicted. I make no comment on the recent developments.

Sue’s right to a (second) appeal was begun on ‘fresh and compelling’ material gathered prior to the alleged attempts of others to pervert the course of justice. We cannot – and should not – comment on these recent matters until evidence has been presented and until the courts have decided as to the truth of the Tasmanian Police allegations.

My views are shared by others in this state, and wider afield. We are not confident that Susan Neill-Fraser ‘got a fair trial’. We have asked for a second appeal to be allowed, with a view to either a quashing of conviction or a retrial.

Now, given the present imbroglio, and the May request by eminent barrister Robert Richter and two others (in a private meeting) with the Premier, the acting Attorney-General and the Solicitor-General, I personally think that Richter’s suggestion of an independent inquiry into the Bob Chappell/Susan Neill-Fraser case is warranted. Not only warranted, but also required as a means of standing outside the original police investigation, of standing outside the trial and the failed appeal; required so that we have someone – some body – to stand outside this mess and to find answers that will work for all of us.

It may be the case that Richter’s approach to the three government members was based on allegedly perverse evidence. However, regardless of the outcome of the present police arrests/charges, I think that the matter has reached a stage where Richter’s request – rightly or wrongly founded – should be granted.

Garry Stannus is a Tasmanian ’northerner’ who made a special trip down to Hobart for the rally. He is into the environment, politics, tennis, current events and social justice. He loves researching pet topics, especially legal aspects, and slow meanders on a push bike, camera across shoulder. The photo above is also his. This article appeared first in the Tasmanian Times: http://tasmaniantimes.com/