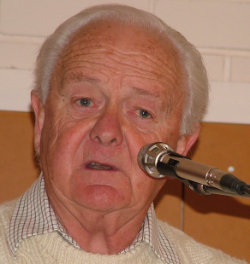 Allan Hall co-founded a legal firm, which became Snedden Hall & Gallop, in Canberra in the early 1960s…before the ACT had a Law Courts Building! He left the firm in 1973 to become the inaugural principal lecturer in law at the Canberra College of Advanced Education (now the University of Canberra), where he developed their first legal course. He left the college in 1977 to take up the position of the first full-time senior member of the Administrative Appeals Tribunal (AAT). The same year, Allan became a commissioner of the Australian Law Reform Commission, working alongside Michael Kirby. He became deputy president of the AAT in 1982 and served until his retirement in 1987. Allan became a Member of the Order of Australia in 1992. His is pictured giving a U3A lecture in 2006.