In a preamble, Mr Rowlings explained Civil Liberties Australia, and highlighted that CLA in 2015 was the first organisation to give Bernard Collaery his first opportunity to speak in public, in front of TV cameras, at the School of Law ANU. 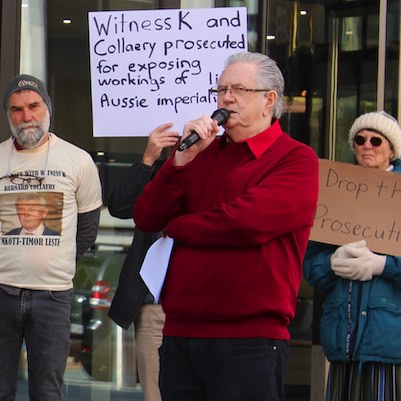 I want to compare and contrast the cases of Witness K and Bernard Collaery, and that of David McBride, the Defence and Afghan War whistleblower.

The governments of today, and of yesterday, are sticklers for the Rule of Law… when it suits them, of course, not all the time.

However, they have no regard whatsoever for another rule, one that you and I, and most Australians and other world citizens, live by every day.

It’s what I call the Rule of Morals and Ethics (or RoME for short).

The Rule of Morals and Ethics is something we all grow up with. We know, from our earliest days, that we don’t steal from our neighbour.

Thou shalt not steal – it’s biblical.

It’s also a Rule of Law, and a Rule of Morals and Ethics which is well understood by every Australian. From 7-year-old child to adult.

Sometimes the ROL and the RoME are the same thing, or at the very least they exist side by side, and they have equal weight in people’s understanding, and – importantly – in their consciences.

Please note that from here I preface all my comments with the words “alleged” and “apparently” in appropriate places, because some claims mentioned have not yet been proven in court.

Now, the Rule of Law says that Australia’s soldiers should not shoot dead any innocent and defenceless Afghani prisoners. That’s also the same rule in international law, human rights law, and the law of the Rules of Engagement for Australian troops in Afghanistan or anywhere else.

Yet, the government is prosecuting David McBride for his revelations in that space.

He was motivated by the Rule of Morals and Ethics when, as a lawyer, he saw incriminating documents go past his desk.

His whistleblowing has led to numerous TV exposes (including recently on 60 Minutes), to news stories, and to radio interviews.

They have also led to two full-on inquiries:

But then, we come to Witness K and Bernard Collaery.

The absolutely stand-out issue in their case is that there is NO MAJOR INQUIRY into the genesis of the K and Collaery cases.

It’s right that we are, all of us, out here today, protesting over how badly K and Collaery have been treated.

But we – and millions more Australians who understand and live by the Rule of Morals and Ethics – should be regularly out on the streets protesting about what the government itself has done in relation to the East Timor oil and gas field treaties and agreements.

We must continue to demand a full public inquiry.

I believe that about 90% of Australians, at least, would say that our bugging of East Timor was totally amoral and completely unethical.

So who was behind it? Who ordered ASIS to do it? Who in government – say Ministers of the Crown, people in the AG’s Department, and or in Foreign Affairs and Trade, was involved, and why? Were private firms involved?

My guess is that there’s a chain of command of about a dozen Australian government people who were in on the bugging. Possibly the Prime Minister, almost certainly the Foreign Minister, definitely I would think a number of senior bureaucrats of Foreign Affairs and of the Attorney-General’s Department.

AND, there were possibly heavies from the oil and gas firms also in on the cheating.

Was what they did legal?

Was it moral and ethical?

Would the Rule of Law – and my Rule of Morals and Ethics – allow them to do it again today.

That’s the more important question. That’s the question to guide the future, rather than rake over the past.

So the real issue is not what K and Collaery did. They were merely preparing a legal case to restore justice to East Timor. Which eventually happened.

The real issue is that Australian Ministers and top bureaucrats totally abandoned morals and ethics because of greed.

Put at the highest, it was national greed. But it was also quite possibly personal greed. That is indicated by the careers of some of the players subsequently with firms who benefited from the negotiations.

Prosecuting K and Collaery is something of a sideshow, a strategic manoeuvre.

Behaviour like what happened in bugging the East Timor negotiating team has been endemic for decades inside the Trade portfolio.

We had to have a full public inquiry into the Wheat Board bribery issues in the Middle East – that scandal also involved Trade.

We’ve have a similar inquiry into the Note Printing and Securency fiasco, where Australians were again involved in bribery, that time under by entities under the control of the Reserve Bank of Australia, but also involving trade issues.

We need to bring the full glare of a Royal Commission to the actions and inactions, the cheating and lying, the subterfuge and the secret surveillance bugging of East Timor.

We need to expose the hypocrisy of those trading in our name.

So today, in protesting the Witness K and Collaery trials, I call on the Australian government to hold a full public inquiry, preferably a Royal Commission.

There’s one rock solid certainty: this issue will not go away.

There’s another certainty: unless a full public inquiry establishes what IS the Rule of Law, and what IS the Rule of Morals and Ethics in relation to Australia’s trade, the issues like how Australia bribed and/or bugged and/or cheated and/or lied will come up again…probably roughly every 5-10 years based on past form.

we need to establish the simple matter of right from wrong. Thank you.