Catch-all bikie laws throughout Australia are bad enough, but the enshrining of new secrecy provisions in court procedures is a major concern for justice, Rebecca Ananian-Welsh writes.

In a courtroom crowded with supporters, Queensland woman Sally Kuether was released on bail earlier this year.

A librarian, she had been arrested and held in custody for six days under the state’s notorious Vicious Lawless Association Disestablishment Act, or VLAD Act. Her alleged crime? Meeting her partner and a friend – two alleged members of the Life and Death motorcycle club – at the Dayboro hotel on December 19.

As Kuether prepares her case she will grapple with a wall of secrecy. Secret evidence, once unheard of, is now increasingly common in Australian courts. It is a fixture of the anti-bikie laws across the country.

In a string of cases, the High Court has upheld the use of secret evidence. Its decisions have revealed that the constitution does not provide Australians with a right to know the case against them.

Life and Death is one of 26 groups declared a criminal organisation by Queensland attorney-general Jarrod Bleijie. It is an offence attracting a mandatory minimum sentence of six months’ imprisonment for members of such organisations to meet in public.

Bleijie has said that the reasons for his decision to declare the 26 organisations may never be made public. Nor are these declarations subject to judicial review.

This kind of secrecy is the latest step in an evolution towards secret decisions and evidence in the states. A similar emphasis on secrecy is found in Queensland’s Criminal Organisation Act, which empowers the Supreme Court to declare organisations and make control orders in respect of their members. In both cases, “criminal intelligence” evidence may be withheld from a party and his or her representatives.

Almost identical provisions for secret criminal intelligence evidence may be found in organised crime control order legislation in South Australia, NSW, Western Australia and the Northern Territory, though the processes for declaring organisations and issuing control orders differ in each state.

Secrecy is vital to many policing and intelligence operations. However, once a matter reaches the courts the adversarial system of justice generally requires transparency. This includes the capacity for each party to know and test the case against them.

Traditionally, a successful claim of secrecy results in information being excluded from court proceedings. The bikie laws enacted across much of Australia provide for information to be kept secret and used in court. Unsurprisingly, many of these laws have been subject to constitutional challenge.

A strong tradition of fair process exists in our courts and is protected by the constitution, albeit indirectly. The constitution enshrines a separation of judicial power, which means that legislation will be invalid if it offends the fundamental independence or impartiality of a court. Fair process is central to judicial independence and impartiality, so it receives protection through this principle.

The cases concerning secret evidence began in 2008 with Gypsy Jokers Motorcycle Club Inc v Commissioner of Police. The High Court accepted that fair process was challenged by provisions allowing the Police Commissioner to classify and rely on secret evidence. However, the court upheld the act on the basis that the Supreme Court of WA could review the secret classification and thus preserve its constitutionally protected independence.

This ruling was crucial to the later cases of South Australia v Totani, Wainohu v New South Wales and Assistant Commissioner Condon v Pompano Pty Ltd. These cases concerned declaration and control order schemes in South Australia, NSW and Queensland. Only the Queensland scheme survived constitutional challenge, and that paved the way for the expansion of Queensland’s bikie laws through the VLAD Act. 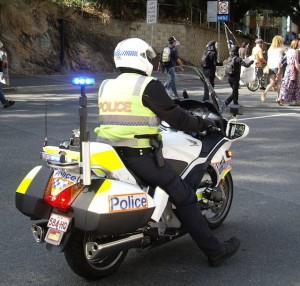 Left: A Queensland ‘bikie’ keeps close watch on the tail end of a protest march through the streets of Brisbane in November 2013. – Kristine Klugman photo

Despite the different outcomes, the High Court repeatedly affirmed that the secret evidence provisions of all three Acts were constitutionally valid.

Together, the cases set up three necessary conditions for secret evidence to be acceptable in court proceedings. Secret evidence is permitted if the court: has the capacity to reassess the classification of the information; is not being forced to take particular steps with respect to the evidence; and retains sufficient discretion to potentially counteract any unfairness (for example, by attributing less weight to the evidence or ordering a stay of proceedings).

The High Court’s approach may preserve the judge’s decision-making independence; the government cannot force the judge’s hand. It fails, though, to address the clearest problems arising from secret evidence. These are fairness to the parties and damage to public confidence in the impartial administration of justice if significant parts of a government’s case may remain secret and untested.

Despite the numerous challenges to secret evidence provisions, the court has not once suggested that a fair hearing requires a minimum standard for disclosure. In short, the High Court has been prepared to say that fairness and judicial independence are maintained, even where openness is not.

It seems Kuether and others subject to secret evidence schemes around Australia cannot claim any constitutional entitlement to know the case against them. Responsibility for maintaining a fair court process rests entirely with the judge.

Arguably, however, judges considering untested police evidence in a system built on openness and adversarialism are performing their duties with one hand tied behind their backs. This is one of many reasons why some members of Queensland’s judiciary have shown resistance to the latest bikie laws.

These events highlight the lack of an explicit protection for fair process in the text of our constitution. Governments have a clear interest in being able to rely on undisclosed evidence.

The High Court has shown its capacity to protect fair trial rights through the lens of the separation of judicial power. It seems that the only way to check the increasing use of secret evidence in our courts may be the path of last resort. The time may have come for Australians to consider the option of constitutional change to strengthen fair process protections.

* Rebecca Ananian-Welsh is an academic with the ARC Laureate Fellowship Project ‘Anti-Terror Laws and the Democratic Challenge’ and a member of the Gilbert + Tobin Centre of Public Law. She recently completed a PhD on terrorism law and the separation of judicial power at UNSW. Before commencing her doctorate Rebecca held positions with the Australian Attorney-General’s Department and as a litigation Solicitor with DLA Piper, Sydney.