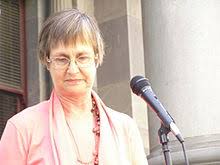 Secret trials have no place in a democracy. Yet Australia has sunk so low such trials are now almost commonplace, she told a rally in Adelaide in early November 2020..

We are here today to protest the prosecutions of an unknown man, Witness K, and his lawyer, Bernard Collaery. Two brave men, up against the odds.

Witness K was an ordinary man doing his duty. Maybe not quite ordinary given he was working for ASIS*, but he was a man with a conscience. He listened to his conscience: and it told him that what Australia was doing in Timor Leste was not honourable.

But Witness K turned from an ordinary man to an extraordinary man when he acted on his conscience, knowing it could be a bridge too far. He could never have imagined how far.

He blew the whistle, albeit discreetly, going through the proper processes and disclosure rules of his workplace.

Rather than admit the illegality of its operations, the Australian government responded by going into cover-up mode: when that didn’t work, to scapegoat mode.

Each one of us is here at this rally today because we acknowledge the moral rightness of his decision. And we deplore the actions of successive Australian governments in their dealings with Timor Leste.

It’s hard to believe, but in the Australia of today, any one of us acting on our consciences could be placing ourselves at risk. Each of us is potentially a Witness L or a Witness M.

Australia was involved in espionage against our neighbour Timor Leste, a developing nation, a nation attempting to rebuild itself after years of colonisation, cultural suppression and, latterly, genocide.

As a proud new nation, rebuilding from scratch, Timor Leste ought to have been able to expect better of its neighbour and so-called developed nation, Australia, in the CMATS Treaty negotiations over oil and gas resources in the Timor Sea.

Instead – and the instruction must have come from on high – ASIS bugged the Timor Leste negotiating team’s office in Dili. This effectively tied the hands of the negotiating team behind their backs without them even knowing it was so.

It guaranteed Timor Leste obtained minimal outcomes from the treaty, including even the gas that was within their own maritime borders. Shame, Australia, shame.

And Bernard Collaery. What did he do to deserve the charges against him? He did what a lawyer should do. He represented his client, Witness K. Since when did representing a client become a crime? It seems when Australia’s Attorney-General, Christian Porter, says so.

Just remind me: Who are the bad guys in this story? It’s not Witness K – he was acting ethically in reporting this. It’s not Bernard Collaery: he was doing the job he was paid to do.

So who are the ones who should be prosecuted? I’ll leave that to your imagination.

In recent weeks we have heard US President-Elect Joe Biden saying of his nation: ‘We are better than this’. He could have been talking about Australia.

Our government is up to its neck in the trials of Witness K and Bernard Collaery.

Secret trials exist in autocracies and tyrannies. What does this say about us as a nation moving into the third decade of the 21st century? Ours is a nation fast becoming a mockery of a democracy.

Today marks the 43rd hearing that Witness K or Bernard Collaery has had to attend. And so far it has cost the Australian taxpayer more than $3m! There is nothing to be gained in pursuing these prosecutions. There is no justice to be served.

And as long as these prosecutions are held in secret, the innocent will become the guilty,

As long as these prosecutions are held in secret, the guilty who oversaw the original crimes in those offices in Dili remain at large, without a single charge against them.

It is time for a high level, open and public inquiry to be held into those treaty negotiations, rather than allowing this subterfuge of prosecutions to distract from the real story and the real criminals.

It is time to Stop The Prosecutions!

Former South Australian Member of the Legislative Council, Sandra Kanck, addressed the Adelaide version of a series of national capital city rallies on 9 November 2020. This is her speech.