With few solutions to the nation’s long-term refugee puzzle coming forward, here’s a rounded proposal to start resolving the unequal human equation, given flexibility and a little residual compassion. 18 May 2016

By APS*
In solving the ‘refugee dilemma’, we need to learn from the past and adapt old lessons for the future.
Despite calls recently for creative responses to the PNG supreme court’s decision on the Manus Island detainees – and how Australia responds to asylum seekers more generally – few new ideas have come forward. Perhaps a new combination of past and present policies and proposals can move us forward. 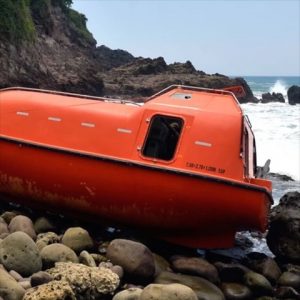 Photo: ‘Orange roughy’ lifeboat, previously Australia’s first choice for ‘sending refugees back to where they came from’.

Both the Liberal-National government and Labor continue to argue for hardline positions based around “stopping the boats”. Humanitarian considerations come way down their list of priorities, and few really believe that the often-espoused concerns about drownings at sea are their major motivation.

In contrast, those opposing the positions of the current and previous government argue for asylum seekers to be allowed into Australia, and for most to be able to live in the community with few or no restrictions. Humanitarian concerns are their main drivers, and a desire for Australia to regain its reputation as a good international citizen abiding by both the spirit and the letter of refugee conventions. There doesn’t seem to be much middle ground between these two positions, or any obvious way to reconcile them.

Political reality demands we recognise that a sizeable proportion of the population are at best very wary of uncontrolled boat arrivals, and at worst actively hostile to those who come by this route. We also should recognise that a resurgence of the boats is almost certain to alarm many of these people, particularly when their fears are fanned by anti-immigrant groups and sections of the media. This in turn would certainly to boost the stocks of the political right, just as it is currently doing in Europe, and to strengthen groups wishing to reverse any policies seen to be soft on (ie sympathetic to) refugees.

Furthermore, alongside a push for crypto- or blatantly racist policies, a resurgent right will also attempt to wind back other policies that many supporters of all three major political parties consider progressive – such as those relating to indigenous communities, women, LGBTI, wealth distribution, and social welfare in general.

And so any “asylum seeker solution” that is politically feasible and desirable needs to tread warily to avoid a significant resumption of boat arrivals, and the negative political and social consequences that may arise from this.
That doesn’t mean that we should ignore humanitarian concerns, or our international obligations, but rather that those concerns and obligations sit alongside and need to be balanced by other considerations if ignored in the short term could undermine other longer term social objectives – including in relation to refugees.

I suggest that a combination of measures may be able to resolve the seemingly irreconcilable objectives of avoiding many (and preferably any) new boat arrivals, while at the same time treating refugees humanely and respecting our international obligations? It wouldn’t be easy or certain, but in the absence of any real alternative, the policy mix outlined here is worth considering.

The components to the proposed approach need to be taken together, as they balance both competing concerns and conflicting incentives.
1. Firstly, to deal with the most immediate political and humanitarian conundrum of Manus Island, the government should allow the 850 men currently on Manus Island to come to Australia (and, if possible, to go to NZ) for assessment and processing, and for those who are found to have valid refugee claims to be immediately granted asylum. Similarly, the government should announce that those asylum seekers on Nauru would be moved to Australia for processing as soon as is practical.
It seems reasonable (as the government claims) that such a move would signal to those in transit camps in Indonesia and elsewhere, and to those who organize asylum seeker boats, to resume attempts to reach Australia by sea. To counter such perceptions and the consequent resumption of boats, two additional steps would be required:
2. The first would be similar to the approach proposed in the 2011 Transfer and Resettlement Arrangement’s “Malaysia solution”. A clear and very firm announcement should be made that a significant number of people (at least the first 1000) apprehended while attempting to reach Australia by boat would be immediately flown to Malaysia (and possibly other third countries such as Indonesia), where they would be allowed to live in the community. While unpalatable to those who believe we should accept boat arrivals, this would be a safer alternative to the current “turn back the boats” policy, or returning people to the countries from which they are fleeing (as has been done in relation to Sri Lankans recently).
As part of this policy, the government would also make it very clear that these people transferred to Malaysia would have no hope of being considered for asylum in Australia, even if found to have valid refugee claims. In exchange, Australia would take at least an equivalent number of people from Malaysia with refugee claims accepted by UNHCR before the date of the announcement. If widely publicised such a policy should substantially reduce incentives for people to try to reach Australia by boat, particularly if complemented with the second element outlined below.
[Yes, we would need to again seek the cooperation of Malaysia and/or other countries, and this would be difficult. But it has been done before, and a similar arrangement may be possible again, particularly if supplemented with financial assistance – which would probably be less than the costs of running Manus and Nauru anyway.]
3. Thirdly, the Government would announce and widely promote a major increase in Australia’s refugee intake (eg to 50,000 per year, the figure the Greens have recently proposed), but with some specific conditions:

• Priority for refugee intake would initially be given to those people currently in transit camps in Indonesia, who should register immediately for consideration. (People who arrive after the announcement would not be considered.)

This combination of policies and actions might be expected to both dissuade further boat arrivals while providing hope and better conditions for many more refugees, and ceasing the misery and international shame of offshore detention. It would therefore seem to have a chance of gaining support from all but the more extreme advocates on either side of this issue.
And as well as providing asylum for more refugees, it would reduce the potential for political scaremongering on asylum seekers that distracts attention from other domestic issues the country is facing.
The most difficult elements of such an approach are likely to lie in getting the entrenched advocates on both sides of the asylum seeker debate to realise that it might be possible for each to achieve most of their objectives if they are a bit more flexible in their approaches.
The “wins” for the “pro-asylum seeker” side would be the closure of Manus and Nauru, significantly more refugees being given asylum in Australia, and a less risky method of returning would-be boat arrivals. Furthermore, if the policy succeeds and we are able to discuss refugee issues with less fear, it could limit the resurgence of anti-refugee/immigrant right wing groups and promote a more positive domestic social and political environment for refugees.

These groups might be expected to complain that Australia would still be avoiding its international responsibilities in relation to refugees by sending them to a country where they lacked the necessary legal protections. A secondary criticism may be that the plan imposed an unreasonable burden on Malaysia (and any other regional neighbour(s) we may persuade to cooperate). However, if this approach does not increase, and over the long run perhaps reduces, the overall numbers of asylum seekers in Malaysia and Indonesia, it would be a hard attack to sustain. These criticisms would be further ameliorated if there was also an increase in our overseas aid targeted to vulnerable groups in source countries and to UNHCR.
On the conservative side, those genuinely concerned about people dying at sea could expect to see the deaths reduced or even cease. Those who fear unknown and potentially huge numbers of unmanageable boat arrivals (and particularly that many of these may not have valid refugee claims) should feel reassured that we would only be taking in agreed numbers who met UNHCR’s and our criteria.

It would seem that the only groups who would have genuine reason to oppose such an approach would be those who believed we should take no or minimal numbers of refugees, and those who saw political advantage in maintaining the current slanging match between the pro and anti groups.
It’s conceivable that either a Turnbull LNP or a Shorten Labor government might see such an approach as an ideologically acceptable attempt to address both an immediate headache (Manus) as well as a long term strategic problem. While the Greens opposed the Migration Act changes in 2011, a more pragmatic Greens leadership, and the significant increase in refugee numbers proposed, may mean that the party would be a bit more flexible in its response to such changes in the future (assuming it still has a deciding influence).

Summary of proposed plan
1. Allow the 850 men currently on Manus Island to come to Australia (and, if possible, to NZ also) for assessment and processing, and for those who are found to have valid refugee claims to be immediately granted asylum. Flag a similar wind-down of asylum seekers on Nauru.
In order to prevent the likely resumption of asylum seeker boats, take two additional steps:
2. Use an approach similar to the 2011 Transfer and Resettlement Arrangement’s “Malaysia solution”.
a) A clear and very firm announcement that a significant number of people apprehended (at least the first thousand, but keeping open the possibility of this increasing) while attempting to reach Australia by boat would be immediately transferred by air to Malaysia (and perhaps other countries as well), where they would be allowed to live in the community (possibly with some Australian assistance to the host government).
b) Make it very clear that these people would have no hope of being considered for asylum in Australia, even if found to have valid refugee claims.
c) In exchange, Australia would take at least an equivalent number of people from Malaysia with refugee claims accepted by UNHCR before the date of the announcement.
3. The government to announce and widely promote a major increase in Australia’s refugee intake (eg to 50,000 per year), but with two further aspects
a) Initially, priority would be given to those people currently in transit camps in Indonesia (ie at or before the day of the announcement)
b) There should be a very firm policy that after these people have been processed, no further asylum seekers will be taken from Indonesia, and that future asylum seekers will only be taken from other countries (perhaps only from countries of first asylum)
These second two elements should create a strong disincentive for people to try to continue to travel to Indonesia.
ENDS

* APS is an Anonymous Public Servant who does not work in the refugee/immigration area.