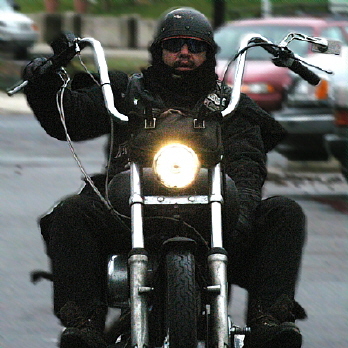 The Supreme Court has ruled that a critical part of the “bikies law” in South Australia is invalid. The ruling forces immediate cancellation of charges against seven bikies, and calls into question similar extraordinary, draconian laws in virtually every Australian jurisdiction.

The Supreme Court of South Australia has put the skids under the State’s bikie laws in a ruling that will reverberate throughout Australia.

The ruling late in September 2009 puts in doubt virtually all the hastily-passed, ‘me too’ bikie laws founded on the extraordinary SA legislation produced under Attorney-General Michael Atkinson*.

In a complex but finely argued judgement, the SA Supreme Court ruled by 2-1 majority  that s14 (1) of the Serious and Organised Crime (Control) Act 2008 (SA) is invalid.

As well, the ruling raised the issue of whether provisions of the bikies law emasculated the SA courts’ authority so much that they no longer satisfied Australian Constitution rules about the distinction between judicial and administrative decision-making.

The case was Totani & Anor v The State of SA [2009] SASC 301 (see URL below for the full ruling). The Full Court comprised Justices Bleby, White and Kelly. Mr Justice Bleby wrote the key ruling, with Kelly J agreeing without comment, and White J dissenting with a lengthy and reasoned dissent.

The court ruled that one section of the legislation was invalid: the invalid section is Part 3 – Control orders:

(1) The Court must, on application by the Commissioner, make a control order against a person (the defendant) if the Court is satisfied that the defendant is a member of a declared organisation...(plus numerous subsidiary clauses).

Bleby J, in a fully-referenced treatise of superior quality and scholarship**, highlighted that the ‘declaring’ of an organisation was based on mere information (criminal intelligence, not evidence) assembled by the police commissioner and ruled on by the A-G. No-one was permitted to know what the criminal intelligence was, or the reason for the A-G’s ruling.

The process was legal to the stage of the A-G’s ruling, but the process became illegal if, on appeal to a court, the court was not permitted to review either the criminal intelligence or the reason for the A-G’s administrative ruling.

Equally importantly, the person appealing the ruling was not permitted to know what was alleged against him/her, and the ‘information’ provided by the police commissioner could not be tested as to accuracy by the court.

“To hold that an application under s 14(1) must proceed without notice to the defendant is a significant denial of the defendant’s fundamental right at common law to be heard in proceedings that may adversely and significantly affect his civil liberties. It would require clear and unambiguous language in the Act if that right were to be denied. I can see no such provision in the Control Act beyond that of s 14(3) which is enabling only.”

The SA Government has threatened to appeal to the High Court. CLA hopes they do.

The immediate impact of the ruling is that charges against seven SA bikies have been dropped.

* Mr Atkinson is the Attorney-General who apparently doesn’t know his own defamation laws, because on his behalf the State Cabinet recently paid $211,000 in compensation to a magistrate for criticisms made by Mr Atkinson.

** The Bleby ruling makes reference to judgments of the High Court of Australia at length on key issues, and also points to recent, seminal cases from the superior courts of Canada, the USA and the UK as guidance for its ruling.