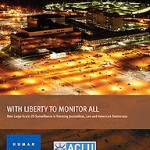 Just as AG George Brandis launches a massive expansion of surveillance and data retention, a serious warning from America warns about the dangers to democracy of such moves. 31 July 2014

(Washington, DC, USA) – Large-scale US surveillance is seriously hampering US-based journalists and lawyers in their work, Human Rights Watch and the American Civil Liberties Union say in a joint report.

Their comments and recommendations have direct relevance in Australia, Civil Liberties Australia’s CEO Bill Rowlings said. “As AG Brandis spruiks the wholesale widening of surveillance and massive new data retention in Australia, the dangers of these moves are being demonstrated by a sober, sensible US report based,” he said.

The late-July 2014 report says surveillance in the USA is undermining media freedom and the right to counsel, and ultimately obstructing the American people’s ability to hold their government to account.

The 120-page report, “With Liberty to Monitor All: How Large-Scale US Surveillance is Harming Journalism, Law, and American Democracy,” is based on extensive interviews with dozens of journalists, lawyers, and senior US government officials. It documents how national security journalists and lawyers are adopting elaborate steps or otherwise modifying their practices to keep communications, sources, and other confidential information secure in light of revelations of unprecedented US government surveillance of electronic communications and transactions.

The report finds that government surveillance and secrecy are undermining press freedom, the public’s right to information, and the right to counsel, all human rights essential to a healthy democracy. “The work of journalists and lawyers is central to our democracy,” said report author Alex Sinha, Aryeh Neier Fellow at Human Rights Watch and the American Civil Liberties Union. “When their work suffers, so do we.”

Impact of surveillance on journalism

The report is drawn from interviews with some 50 journalists covering intelligence, national security, and law enforcement for outlets including the New York Times, the Associated Press, ABC, and NPR.

The US has long held itself out as a global leader on media freedom. However, journalists interviewed for the report are finding that surveillance is harming their ability to report on matters of great public concern.

Surveillance has magnified existing concerns among journalists and their sources over the administration’s crackdown on leaks. The crackdown includes new restrictions on contact between intelligence officials and the media, an increase in leak prosecutions, and the Insider Threat Program, which requires federal officials to report one another for “suspicious” behavior that might betray an intention to leak information.

Journalists interviewed for the report said that surveillance intimidates sources, making them more hesitant to discuss even unclassified issues of public concern. The sources fear they could lose their security clearances, be fired, or – in the worst case – come under criminal investigation.

“People are increasingly scared to talk about anything,” observed one Pulitzer Prize winner, including unclassified matters that are of legitimate public concern.

Many journalists described adopting elaborate techniques in an environment of tremendous uncertainty in an effort to protect evidence of their interaction with sources. The techniques ranged from using encryption and air-gapped computers (which stay completely isolated from unsecured networks, including the internet), to communicating with sources through disposable “burner” phones, to abandoning electronic communications altogether. Those cumbersome new techniques are slowing down reporters in their pursuit of increasingly skittish sources, resulting in less information reaching the public.

This situation has a direct effect on the public’s ability to obtain important information about government activities, and on the ability of the media to serve as a check on government, Human Rights Watch and the ACLU found.

Journalists expressed concern that, rather than being treated as essential checks on government and partners in ensuring a healthy democratic debate, they may be viewed as suspect for doing their jobs.

One prominent journalist summed up what many seemed to be feeling: “I don’t want the government to force me to act like a spy. I’m not a spy; I’m a journalist.”

Impact of surveillance on the practice of law

As with the journalists, lawyers increasingly feel pressure to adopt strategies to avoid leaving a digital trail that could be monitored. Some use burner phones, others seek out technologies designed to provide security, and still others reported traveling more for in-person meetings.

Like journalists, some feel frustrated, and even offended, that they are in this situation. “I’ll be damned if I have to start acting like a drug dealer in order to protect my client’s confidentiality,” said one.

The result of the anxieties over confidentiality is the erosion of the right to counsel, a pillar of procedural justice under human rights law and the US Constitution, Human Rights Watch and the ACLU found.

Many existing surveillance programs are indiscriminate or overbroad, and threaten freedom of expression, the right to counsel, and the public’s ability to hold its government to account.

The US should reform its surveillance programs to ensure that they are targeted and legitimate, increase transparency around national security and surveillance matters, and take steps for better protection of whistleblowers and the media, Human Rights Watch and the ACLU said.

The report is available here …