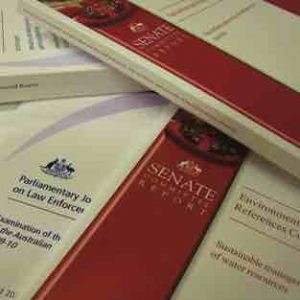 Following the news that the eligibility of not one but two Senators is to be challenged in the High Court, one can only imagine the excitement of barristers and constitutional lawyers as they gather around the chamber’s water cooler.

In early November 2016, the Senate resolved to refer Senator Bob Day and Senator Rod Culleton to the High Court (sitting as the ‘Court of Disputed Returns’) to determine whether either Senator was eligible to be elected at this year’s election. In the case of now resigned Senator Day, questions over his eligibility extend back to 2014 and may throw into doubt any laws that only passed because of his support.

But beyond the immediate political implications for the government lie serious questions about who should be eligible to serve in Australia’s Parliament, the impact of criminal proceedings on candidates in elections, and the duty of parliamentarians to avoid conflicts of interests.

First, to the arcana of the Constitutional provision in question and the rules governing who can and can’t stand for parliament.
While the Commonwealth Electoral Act disqualifies some people from standing as candidates (essentially, anyone who is not eligible to vote) most disqualifications are set out in section 44 of the Constitution. Briefly, if you’re a dual-citizen, an unpardoned traitor, undischarged bankrupt or current public servant then, sorry, you won’t be settling into the red and green leather benches anytime soon.

Section 44 also disqualifies those ‘convicted and…under sentence, or subject to be sentenced, for any offence punishable under the law of the Commonwealth or of a State by imprisonment for one year or longer’, potentially catching Senator Culleton who had been convicted of larceny for stealing a set of tow-truck keys in 2014, a crime carrying a maximum sentence of five years imprisonment. The conviction was later annulled but not until after the 2016 federal election.
The problem for Senator Culleton is that, based on previous decisions, even though the conviction was annulled before he took his seat in the Senate, what matters is his eligibility at the time he nominated for the election. On a strict reading of the section 44, it seems likely that Senator Culleton’s conviction meant he was disqualified when nominations closed in June 2016.

So is that the end of the matter? Is Senator Culleton simply Rod Culleton? I hope not and instead hope the court avoids a strict reading of the conviction disqualification in recognition that we give individuals the right to appeal their sentences and convictions. Should a person who can, by right, appeal their conviction be disqualified from running for office or should we wait until all appeals are concluded? Such an approach would not be unprecedented. Indeed, in many of our laws, allowance is made for the possibility that a conviction will be overturned on appeal. Nor would it be inconsistent with the operation of other disqualifications in section 44.

Senators facing bankruptcy can avoid disqualification by crowd sourcing funds (as Bob Brown did) or hoping for a ‘white knight’ investor (which Bob Day was counting on). Public servants can often take advantage of employment laws which give them a right to take up their old job if they resign to contest an election. The Constitution even suggests that one regime’s traitor may, later, be seen as a political prisoner, pardoned, and then free to stand for election. Is respecting a person’s right to use the criminal appeal process so different? What outcome – strict approach or liberal approach – minimises the chance of an injustice?

Who can serve, whose interests do they serve?
This is not merely for the sake of one Senator but about preventing the disenfranchisement of individuals through malicious or politically-motivated prosecutions. Imagine a parliament passing a new criminal law or increasing, say, the penalty for using offensive language, to disqualify members of a rival party from standing at an upcoming federal election and a lower court convicts those individuals for breaching the law. Even though a higher court might eventually overturn the law and convictions as unconstitutional, the individuals would still have been ineligible to stand in the election.

If Senator Culleton’s case raises important questions about who should be able to serve as a parliamentarian, Senator Day’s case focuses attention on whose interests they should serve while a member of Parliament.

While Senator Day’s immediate downfall may be the result of his business’s collapse and likely bankruptcy (which also raises questions over insolvent trading), the High Court will be looking at whether Senator Day was disqualified under section 44 on the grounds that he had a ‘direct or indirect pecuniary interest’ in an agreement with the Australian Public Service of the Commonwealth. In particular, this interest seems to be related to a property Day owned which was later used as his electoral office.

In this case the High Court will have a chance to grapple with the question of whether the rule against members of parliament having pecuniary interests in contracts with the Public Service is to protect the independence of Parliament or to protect the public’s interest (and money!) from MPs and Senators voting on matters in which they have a direct financial interest.

There has only been one High Court decision on the question of ‘pecuniary interests’, in 1975 and only before a single judge of the High Court. In that decision Chief Justice Barwick said that the rule against pecuniary interests was to prevent the government of the day buying the votes of other parliamentarians by offering a juicy government contract. In other words, it isn’t about misuse of public funds but about the independence of parliament. Now, this might have been enough in the days before major political parties or in dealing with independents and balance of power Senators, but it seems out of keeping with modern expectations that politicians should act in the public interest and declare conflicts of interest.

Senator Day’s case offers the chance for the court to revisit the narrow reading of ‘pecuniary interests’ and to raise the bar for the separation of a Member of Parliament’s financial and political roles.

And finally, a technical request to their honours on the High Court bench. These questions are not just of ordinary electoral law but have constitutional significance. While there is no requirement under the Electoral Act for more than one High Court judge to hear a case when sitting as the Court of Disputed Returns, it is traditional that all seven judges hear and decide constitutional law matters. Given section 44 disputes arise infrequently but the decisions have lasting effects on the composition of our representative bodies, a majority or unanimous ruling would be preferable to that of a single judge.

Oh, and although everyone is entitled to their day in court, these decisions affect everyone – so Senator Culleton, please reconsider your decision that you will represent yourself, even if constitutional law is right up your ‘veggie patch’. I’m sure a lawyer, eager to make their name, will offer their services pro-bono.

Tim Vines is Vice-President of Civil Liberties Australia. He is a lawyer with a government body, and is studying for his PhD in Law, analysing legal issues around global health problems and opportunities.