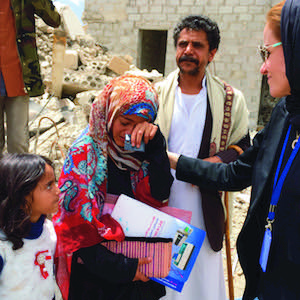 ‘I don’t want to live any more’ said the man standing in the rubble of his destroyed home. His teenage daughter beside him burst into tears and the younger daughter looked up at him, not understanding.  CLA member and former Fremantle MHR Melissa Parke – a member of the three-person UN Group of Experts whose report on Yemen is under consideration by the UN Human Rights Council – explains the tragedy of a violent one-sided war, a nation bombed towards oblivion, and a broken people whom the world has forgotten. (Includes link to Yemen Report to the UN HRC).