Operation Ironside, boosted by the AFP as a worldwide success, was possibly illegal under Australia law…or so the AFP Commissioner’s statements would lead us to believe.

Commissioner Reece Kershaw, when asked if this operation was legal in Australia, told the media it was conducted under the Telecommunications and Other Legislation Amendment (Tola) Act but the Guardian Australia reported this legislation did not exist when the operation commenced.

A spokesperson for the AFP refused to be drawn on this issue, saying, “There are provisions in commonwealth [sic] legislation which prevent the AFP from confirming the details of the legislative provisions relied upon until these matters are lawfully disclosed in open court”.

Regardless of this lame attempt at damage control, the Commissioner of the AFP appears to have misled the press. What happened to the AFP legislated values, one of which is transparency?

This does not inspire confidence when seen in the context of known AFP telecommunications breaches with separate reports between 2017 and 2021 identifying over 58 breaches involving two journalists, 3249 more general breaches and only 9 out 1713 access requests being compliant with obligations, leading the Ombudsman to describe the AFP behaviour as “cavalier”. 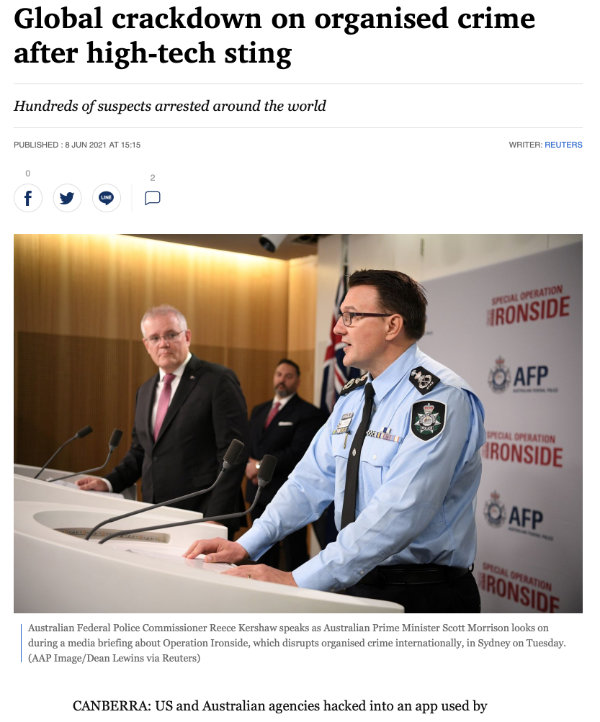 How legal was Operation Ironside if the Commissioner of the AFP cannot get this right in a public briefing while standing beside the Prime Minister? …and then his spokesperson pulls down the veil of secrecy. The AFP Commissioner’s No 1 task needs to be getting his own house in order before asking for any more powers.

This alarming episode is a combination of mixed messages, mashed principles, and missing rights and liberties under the rule of law, delivered jointly by the head of Australia’s political and policing regimes.

The issue of trust in police was raised by Commissioner Kershaw’s own behaviour towards the end of the press conference when he needlessly announced to the world that Hakan Ayik, an alleged organised crime boss, was “one of the coordinators of this particular device” [the piggy-backed telephones used by criminals to communicate] and “that he has essentially set up his own colleagues”.

Kershaw’s subsequent comments made it clear that he knew this created physical threats to not only Ayik but to his family, which includes innocent children. Whether elements of the international underworld had worked this out for themselves or not, senior law enforcement officers should not be associated in any way with possible incitement to violence against anyone in the community regardless of their ‘wanted’ status.

Any defence, that Commissioner Kershaw advised Ayik to hand himself in, is moot, especially where there is the possibility of collateral damage to innocent people in the form of family or bystanders.

The final moment of awkwardness in the conference was that the Commissioner, as the head of a $1.3 billion organisation, indicated the whole scheme was cooked up by officers when under the influence of alcohol: he said that “…some of the best ideas are discovered over a few beers”. Despite the Commissioner’s apparent endorsement, this is not a recommended police planning methodology and most Australians would prefer to hear about how his highly capable and talented staff planned and executed such a major operation after strategic and tactical analysis.

The final question raised by this event is a fundamental policy question of possible life-and-death importance: when does the AFP choose to detain or arrest alleged criminals?

Is it before they have committed an offence, after the first offence has been committed regardless of severity, or is it after numerous offences have been allowed to proceed in the interests of collecting intelligence?

These are both ethical and legal questions involving the possibility of police becoming accessories to the commission of offences. The community expectation would normally be that offenders are interdicted before or after they have committed the first offence becoming known to police. How many subsequent offences were committed and what were they in the case of Operation ironside if police allowed criminals to continue to operate?

If the now-head of the Australian Crime and Intelligence Commission (ACIC), Mick Phelan, who was then with the AFP, had applied what appears to be the current policy – wait and watch crimes being committed – then two Australians of the Bali 9 would still be alive today, not executed by a firing squad of the Indonesian state.

The long-term results of Operation Ironside are yet to be seen but it is unlikely they will eradicate illicit drug markets in Australia. Every high school economics student understands that supply is created by demand and not the other way around – if there is no demand there is, with very few exceptions, no supply. The extent to which the Australian population is self-medicating on illicit substances lies at the root of this issue and is responsible for creation of the extra-legal supply chain run by organised crime – a situation the Government has created and law enforcement has been unable to control in even the short to medium term.

The runaway apple cart of unending police and security services’ demands for increased law enforcement powers is rapidly becoming a greater danger to Australian society than the alleged challenges sought to be overcome. The system concentrates increasing authority in politicians who shape the performance of law enforcement agencies. These people belong to one of the least trusted occupational groups in Australia.

The dangers of this concentration of power are becoming apparent in the politically-driven abuse of authority to silence whistle blowers, interfere with journalists and cover up for mates, financial contributors and failed ministers. It is time for law enforcement officials to step back from politics and fulfill their mandated role in the community.

Australian police already have extraordinary powers, more than in many other liberal democracies, and they need to get on with the job of protecting the whole society and understanding that policing is not an objective in itself, nor is it a foundation to give a leg up to politicians of any persuasion.

It should be made clear that nothing in the article is intended as a criticism of the men and women of federal law enforcement. It is only right and proper that each of them stands accountable on their own merits. To remove any doubt, however, the article is in its entirety an unabashed criticism of political and senior management decisions and actions on law enforcement in Australia.

Dr Tony Murney has a lengthy experience in government and international organisations having held positions in the Commonwealth Parliament, ACT Policing, the AFP International Deployment Group and undertaken several appointments with the UN. He served three tours in Afghanistan and two in Somalia and held several key positions including Chief Technical Adviser on Police Professionalisation in Kabul and Deputy Commissioner of the UN integrated Police Team in Mogadishu. Tony is a committed advocate for international police development and reform with a strong interest in civil liberties, balanced security solutions and good government. He speaks regularly on these subjects both domestically and internationally. Tony has a PhD in anthropology and undergraduate qualifications in regional development.