The US government’s own audit found 95% of weapons and explosives fail to be detected by US airport passenger screening. Any reason it would be different in Australia?

US airport security goes to the dogs

The USA’s Transportation Security Agency – responsible for screening passengers at airports – is going to the dogs.

When the US government’s own agents audited procedures in an undercover operation and found that screeners failed to detect weapons and explosives in 95% of cases, the entire program is being publicly lambasted. 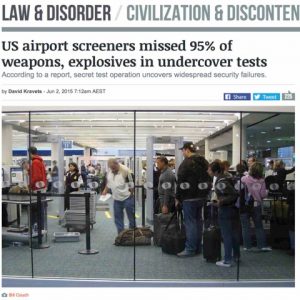 US politicians and federal watchdogs this month derided the TSA’s ability to adequately detect weapons and other contraband during the passenger screening process at the nation’s airports.

“In looking at the number of times people got through with guns or bombs in these covert testing exercises it really was pathetic. When I say that I mean pitiful,” according to Stephen Lynch, a Democratic member of the House of Representatives from Massachusetts. During a House oversight committee hearing about classified reports from federal watchdogs, he said: “it’s horrific.”

Auditors, posing as travellers, discovered enormous loopholes in the TSA’s screening process. A leaked classified report in mid-2015 found that as much as 95% of contraband, like weapons and explosives, got through during clandestine testings.

Lynch’s comments were in response to the classified report’s findings.

According to ABC News, the report showed that agents failed to detect weapons and explosives in 67 out of 70 undercover operations. The news report said: “Homeland Security Secretary Jeh Johnson was apparently so frustrated by the findings he sought a detailed briefing on them at TSA headquarters in Arlington, Virginia. US officials insisted changes have already been made at airports to address vulnerabilities identified by the latest tests.”

ABC News said that the alarm rang when an undercover agent set off a magnetometer. During a follow-up pat down, however, a fake explosive device fastened to his body was not discovered.

At the hearing, the new TSA administrator, Peter Neffenger, said the agency was undertaking a “full system review”, was retraining screeners and considering using dogs to search passengers…on top of the near-useless scanner screening.