A medical MP has described an article on vaccination by CLA Vice-President Tim Vines as ‘brilliant’ during a committee hearing analysing how to prevent scare campaigns.

A NSW Parliamentarian described an article by Civil Liberties Australia Vice-President Tim Vines as “brilliant” during a hearing of the Committee on the Health Care Complaints Commission in September 2014.

“The Australian Health and Medical Law Reporter article that you included with your (CLA) submission is brilliant; in fact, it is as good an article on the issue as I have read,” said NSW Shadow Health Minister, Dr Andrew McDonald.

Mr Vines was principal author of the article.

Dr McDonald, the Member for Macquarie Fields in NSW, is a paediatrician trained at the Children’s Hospital in Camperdown in Sydney, and in England. He continues while in parliament to work one day a week pro bono as a doctor and teaching medical students. 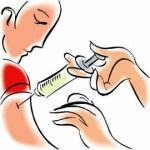 Mr Vines was appearing for CLA before the committee as part of its inquiry into the promotion of false and misleading health-related information and practices. The inquiry was set up as a result of alleged false claims by anti-vaccination promoters: critics claim their activities are lowering the number of children being vaccinated in parts of NSW, which could put the “herd” protection aspect of vaccination programs at risk.

In other words, a very large proportion of the community (generally over 85%) need to be vaccinated so everyone in the community reaps the benefit. If people don’t vaccinate their children because of false claims and irresponsible fearmongering, the entire community potentially suffers. In terms of vaccination-preventable diseases, the sufferers are almost exclusively children, including those too young to be vaccinated, or children who are immune compromised.

The NSW parliamentary committee was chaired by Don Page, the Member for Ballina, and included Legislative Councillors Paul Green and Helen Westwood and Legislative Assembly Members Rosa Sage, and Andrew Rohan as well as Dr McDonald.

Its report is not yet published.

The transcript of Mr Vines’ appearance before the committee begins on p23 here: http://www.parliament.nsw.gov.au/prod/parlment/committee.nsf/0/b7720f4b12e1ed4bca257d5500817248/$FILE/Corrected Transcript – Hearing No 1.pdf