CLA Director Richard Griggs has purpose-built a website to fight for people to keep control of their own images.

The website featured on the front page of The Mercury, Hobart, just before Christmas 2019, in this story by Cameron Whiteley:

A new website is encouraging Tasmanians to campaign to have their photos removed from a national database of images that is not yet legislated.

A WEBSITE has been established for Tasmanians to push to have their images removed from a national database that is not yet legislated. 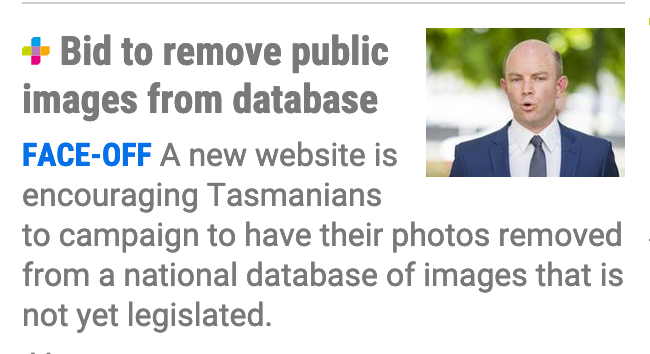 Mr Griggs has encouraged those concerned about the issue to sign up with the intention of submitting a group request to the State Government to have the photos removed.

The action comes after it was revealed the Government had handed over the images as part of a national initiative to crack down on identity fraud.

The policy hit a roadblock in Canberra in October when Parliament’s intelligence and security committee blocked it, urging the Government to dedraft the legislation and put better safeguards in place.

Government assurances that the system in which the images are housed is “secure” have been questioned by critics.

Mr Griggs said the more people heard about the scheme, the less they liked it.

“We are asserting both our moral and legal rights over our own facial images and asking that they be deleted from the database in Canberra,’’ he said.

“The photos were transferred to the national facial recognition scheme without our consent and without approval of parliament.

“The facial recognition scheme is explained by government as being for our own good and to protect individuals from identity theft so it is entirely reasonable for citizens to have the ability to opt out of participating if they hold privacy concerns.”

Mr Griggs wrote to Infrastructure and Transport Minister Michael Ferguson in November about the scheme and received a reply last week.

In the letter, Mr Ferguson said Tasmanian driver’s licence photos were being uploaded to a “segregated and protected area” of the national system and that there was no access to state data for face matching services by any agency.

But Mr Griggs said he was not satisfied with the response.

Amendments were made to Tasmanian regulations in December 2017 to enable the release of the information for identity matching services.

The State Government said the changes followed a national agreement between state and territory leaders.

Federal politicians, independent member for Clark Andrew Wilkie and Greens Senator Nick McKim, are among those who have raised concerns about the issue.

The Federal Government reintroduced legislation on the issue in July after it lapsed during the election.