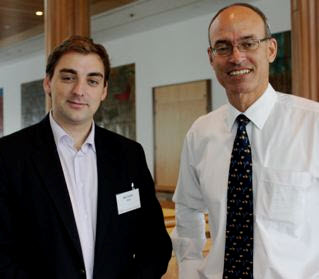 Staff and funding cutbacks severely weakening the Australian Law Reform Commission were the tip of an iceberg, showing what had happened to most similar bodies, CLA has told a Senate inquiry. Tens of billions had been spent on police, security and surveillance for a decade, but entities supporting liberties, rights and freedoms had paid a heavy price.
Photo: Michael Phillis of CLA and inquiry chair, Senator Guy Barnett.

Thank you for opportunity.

The simple questions raised by this reference have resonance across a wide range of civil liberties and human rights areas.

Our submission points out that we strongly believe there’s a need for a body doing almost exactly what the ALRC has been doing, in a similar way, and in general utilising similar expertise.

Australia needs a quality generalist body able to research and analyse changing and newly-arising legal and legislative problems, and able to provide expert  commentary as well as sound recommendations to guide the legislators.

CLA believes the parliament – and perhaps the government – also very much needs the ALRC: it is an excellent parking station for tough issues when the government of the day hasn’t got its legislative thinking straight (the sedition/treason clauses were a prime example in recent years).

We point out in our submission that statutory law reform can be mostly antagonistic to civil liberties.  The past decade, since 11 September 2001 – or 9/11, as the shorthand goes – indicates how rapidly and rabidly laws can move to the right, with civil liberties and human rights getting short shrift.
Personal freedoms and individual liberties have not been flavour of the month for more than 100 months, and counting…

That fact, and the situation with the ALRC, is wholly symptomatic of a steepening decline in the funds, resources and people allocated to those aspects of society which protect and nurture the liberties and rights of the nation. If you like, Australia’s ‘fair go’ levers haven’t had a fair go for 10 years.

For a decade since 9/11, billions upon billions of dollars has been spent on extra funding, resources and staffing for police, security, surveillance, intelligence and military activity. More than $50 billion over that period, who knows how much in total…military, police and spy equipment is very expensive, not to mention the ongoing, draining cost of more than doubling staffing numbers for the APF and the main security agencies.

Money was effectively sucked out of bodies like the ALRC, the Australian Human Rights Commission, and others…and from research with a freedom flavour. The name of the game was security: everyone with an eye for a quid jumped on the money wagon with ‘Terror’ painted on the side.

The ALRC’s own first submission shows in detail how this has occurred to the ALRC.  It shows a dramatic decline in people resources, for example.

But the same is true generally, across many entities and structures for which the Australian Parliament is directly responsible.

We would ask that this inquiry recommends an injection of funds, resources and people to a beefed-up ALRC…

…we would suggest that what is also required is a subsequent Senate inquiry into how the legitimate needs of other civil liberties and human rights-oriented agencies have been allowed to wither over the past decade.

Finally, CLA observes in passing that many of the laws passed in understandable fear in late 2001 and 2002 will shortly be coming up for sunset period re-evaluation: we trust the ALRC will be asked to review the ongoing need for them.

CLA expects that many of the laws can be wound back, because the Parliament now can take a more measured view…but the real difficulty is that, once over-bearing, repressive law is on the books, it takes MPs of enormous courage to wind back the excesses.

That’s why bodies like the ALRC are so vital to the Australian society: they are, as CLA says, pillars of the protection of the people’s freedoms and liberties.