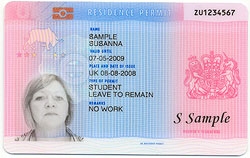 Australians living in Britain will be forced to carry identity cards from November 2008 and pay about $75 for the privilege. A new law does not mandate carrying the card, but for all practical purposes you’ll be a non-entity without it. The card flicks a switch for the UK: from traditional  bastion of personal freedoms to a repressed, ‘Big Brother’ society.

Aussies get pink-carded by British Government

Australians living in Britain will be forced to carry identity cards from November 2008 and pay about $75 for the privilege. Although legislation does not mandate carrying the card, for all practical purposes a person will be a non-entity without it.

The first cards are scheduled for issue on 25 November. Within three years foreign nationals applying to enter or remain in the UK must have and carry a card.

The introduction of ID for foreign residents will be followed by the first ID cards for British citizens, targeting workers in sensitive roles, such as airports, from 2009. Then from 2010 ID cards will be available to young people who want them.

From 2011-12 ministers hope to start rolling out the scheme throughout Britain with people able to apply for an identity card, passport or both at a cost of about $250.

The card issued for British citizens will differ from that for foreign nationals. It will include a picture, name, gender, place and date of birth, issue and expiry date of the card, national identity register number, nationality and two fingerprints but not details of a person’s right to work or access to benefits.

ID cards issued to foreign nationals are compulsory, but British citizens will not have to apply, or carry one, The Times of London reported. Further legislation will be needed before it becomes compulsory for every British citizen aged 16 or over to have an ID card and to produce it when seeking employment or accessing public services.

The Home Secretary, Jacqui Smith, said at the launch of the card: ‘ID cards will help protect against identity fraud and illegal working, reduce the use of multiple identities in organised crime and terrorism, crack down on those trying to abuse positions of trust, and make it easier for people to prove they are who they say they are.’

‘ID cards for foreign nationals will replace old-fashioned paper documents, make it easier for employers and sponsors to check entitlement to work and study, and for the UK Border Agency to verify someone’>s identity. This will provide identity protection to the many here legally who contribute to the prosperity of the UK, while helping prevent abuse.’

The UK’s “Big Brother” database is a work in progress, CLA says. So far: