The US has the highest incarceration rate in the world – with fewer than 5% of the world population but about 25% of its prisoners. Yet the US has started reducing the size of its prison population – quite significantly in some states, including Texas. This is because it is evident that there are cheaper, more effective ways to reduce crime.

For example, on 8 November 2016, California voted to tax and regulate cannabis, with much of this revenue allocated to “justice reinvestment”. This involves re-directing money spent on prisons to community-based initiatives that address the underlying causes of crime. 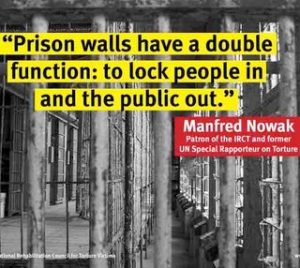 Here in Australia there is a growing realisation that large prison populations are very expensive, with severe social costs for the community.

Meanwhile the health of our prisoners and parolees is a cause for considerable concern. Sometimes the health of inmates actually improves while in prison: if they drink less alcohol, smoke less, take fewer drugs, take some exercise, and avail themselves of health care courses while in prison. But these benefits are often not sustained after prisoners are released back into the community.

The denial of Medicare to Australian prisoners means that the benefits of an increasingly integrated community system of electronic health records is not available to prisoners, who often have severe physical and mental health problems. Yet health care in our prisons is actually rationed – in the sense that the supply of health care is much less than is needed.

An illuminating example is treatment for alcohol and drug problems, which are a major factor in recidivism.

Drug and alcohol treatment varies across the country. In NSW, inmates can continue on methadone/buprenorphine for heroin dependence if they are already on it in the community. But, perversely, in prison they cannot start such treatment, which is known to reduce deaths from heroin overdose and to reduce crime.

The sad fact is that prisoners in Australia have high rates of recidivism. My experience during 20 years on the Queensland Parole Board and the NSW State Parole Authority is that this is in large part because of ongoing problems with alcohol and other drugs and also because of the disgracefully high rate of functional illiteracy (and problems with numeracy) among our prisoners and parolees.

Keeping prisoners engaged with their families and community helps reduce recidivism. So, too, do conjugal visits and the ability to be educated in a practical way and to engage with the world outside the prison gates. Yet currently in Australia, people who have been sentenced for more than three years do not have the right to vote in federal elections while they are serving their sentence.

To echo the words of former British Conservative Home Office minister Douglas Hurd, who served in the governments of Margaret Thatcher and John Major, “Prisons are an expensive way of making bad people worse”.

State and territory governments in Australia claim to be anxious to reduce spending. Yet we currently spend huge amounts of money incarcerating people at a higher rate than any European country and at a rate that is steadily increasing.

We know how to reduce crime, reduce government spending and improve communities. As drug law and prison reformer, Dr Alex Wodak says, “Australian governments should start supporting schemes like Justice Reinvestment. Reducing extreme poverty and Indigenous disadvantage, and the number of people on remand, would also help us reduce the number of people we incarcerate.”

It is clear that, especially when major crimes like homicides, assaults and robberies are falling, rising incarceration rates are a sign of lazy governments.

We will always have prisons. But effective governments should be downsizing our prison populations, closing jails rather than building more, and using taxpayers’ money more efficiently in the community.

Article courtesy of Ross Fitzgerald, who is emeritus Professor of history and politics at Griffith University, the author of 39 books, including a memoir ‘My Name Is Ross: An Alcoholic’s Journey.’ This article first appeared in Fairfax online media on 19 December, 2016.