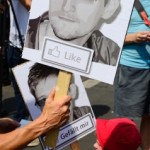 Will Tasmanians have to fill the streets to regain the right to protest freely? CLA Director Richard Griggs questions whether mandatory sentences and massive fines should constrain people’s liberties.

In defence of peaceful protest

What is the value of free speech, if it needs to be voiced in a way that is pre-approved and sanctioned by government? That is the question raised by the Tasmanian Liberals’ recent election commitment to “crack down on illegal protests”.

The commitment includes creating a new criminal offence of “invading or impeding access to a workplace”. The law would involve mandatory $10,000 fines for first time protestors and mandatory three-month jail terms for repeat protestors. For corporations that encourage such activity, the fine rises to $100,000.

There are competing rights at play here. On the one hand, workers have a right to access their place of employment. On the other, the community has a right to free speech. Existing laws of private trespass and public nuisance balance these rights quite well.

The laws are contained in the Police Offences Act 1935 and allow for police to arrest and remove those who enter private land without the permission of the owner or who create a nuisance on public land. Existing punishments for trespass onto private land are a $650 fine or six months imprisonment and about half that for a nuisance committed on public land.

In practice, if a protest hinders access to a workplace, the police are called and protestors charged with the relevant offence. Police remove the protestors and the workers move into the workplace and get on with business.

Neither side thinks the situation is perfect. The protestors would like more time to express their views to any assembled media before being moved on and the workers would prefer it if the protestors never turned up in the first place.

But the laws do a reasonable job of balancing the competing rights and, importantly, the police do an excellent job in bringing about peaceful resolution. The laws have worked without the need for the huge 15-fold increase in fines as proposed by the Liberals. Importantly, the current laws also offer a maximum level of punishment whereas the Liberals’ policy imposes mandatory punishments.

Some will argue that free speech isn’t under threat from the Liberals’ policy because protestors can still protest ‘legally’. The Liberals’ forest spokesperson, Mr Peter Gutwein, put it this way, “If you want to protest legally, if you want to stand on the side of the road and wave a placard, if you want to engage in lawful protest in a park or another agreed public space, then go for it.”

By its very definition protest is meant to be an act of expressing dissent and challenging the status quo.

There are some protests that will break the law and those involved will always face the consequences. Provided they do so in a peaceful manner, the actions of protestors do not warrant mandatory fines of tens of thousands of dollars and months in jail.

The idea of requiring a permit to protest really does need to be challenged. That was a technique that Premier Joh Bjelke-Petersen used to stifle opposition in the 1970s and 80s in Queensland, which produced a police state, and widespread corruption.

At this point it is important to differentiate between those aspects of Liberal policy that punish peaceful protest, which is separate and different to another Liberal proposal to create a criminal offence of property damage. Property destruction is violent by its nature and is not a true expression of free speech. Free speech relies on words, not acts of violence.

The right to peaceful protest at a place of employment is particularly important where public resources, such as trees grown on public land, are being used to deliver a private profit. It is this public interest aspect that legitimises protest action on private land and workplaces.

But this isn’t just about trees and conservationists. The new offences proposed by the Tasmanian Liberals would apply to any group of protestors that takes their concerns directly to a workplace. It would also apply to any organisation which incited or encouraged such behaviour. Perhaps even the writing of this article would become a criminal offence?

Cast your mind back to the protests organised by local Aboriginals in recent years in response to the construction of the Brighton Bypass over the Jordan River. Imagine the international headlines if Tasmania had these anti-protest laws in place then.

Earlier this year I wrote on behalf of Civil Liberties Australia to all Tasmanian Parliamentarians about free speech in a different context. I asked them not to use the existence of disagreement and protest in the community as a justification to vote down the forests peace deal legislation.

I urged them not to set a precedent of requiring 100% community agreement before Parliament can ratify a reform.  I argued that such an approach would set the bar to reform in Tasmania impossibly high and undermine free speech in the process.

I got an interesting reply to my letter from Will Hodgman, Leader of the Tasmanian Opposition. Although he made it clear his party did not support the deal, Mr Hodgman emphatically stated that the Liberals were the “strongest defenders of free speech”.

It is a statement that Liberal parliamentarians often make and it is a core part of their mission to protect individual liberty. You might say it is part of their DNA.

However, the recent election policy released by Mr Hodgman seriously calls into question whether the Tasmanian Liberals can continue to lay claim to be the true defenders of free speech. They risk losing that title to other political parties.

If a political party is to support free speech it means ensuring everyone in society can speak freely, not just those you agree with.

The Liberal party can have this election policy or they can have the title of the strongest defenders of free speech. But they can’t have both.

This article was first published in The Mercury newspaper 21 December 2013.

Richard Griggs is the leader of Civil Liberties Australia in Tasmania, and a member of the national Board of Directors of CLA. In his day job he is a corporate lawyer in Hobart. He has practical experience in free speech and protest matters as a former principal adviser to a Speaker of an Australian parliament.