‘Misguided enthusiasm’ may see inventive police park the bus illegally in trying to combat the drug scourge in rural communities. We need to stay alert to protect our liberties.

While no-one would question the importance of effective policing to the safety & well-being of every community, nor the fact that more often than not our police have a dangerous & thankless job to do, they & the wider community need to be careful not to let their misguided enthusiasm compromise the rights of citizens they are sworn to protect.

To highlight the danger of our over-reacting to fear & the subsequent ease by which we can potentially jettison the social & legal framework that protects our legal & human rights as citizens, we need look no further than the public forum conducted in Eden on Thursday, 23 July 2015, convened to consider the growing problem in many south coast communities with the use of the drug “Ice”.

In front of a gathering of more 100 members of far south coast communities, Far South Coast Local Area Command Crime Manager Kevin McNeill is said to have claimed that police don’t have the resources to investigate every drug dealer, before enthusiastically appraising those gathered of a “creative way” that police had found to combat the problem, using their “large command bus”.

While few would take issue with police parking their “command bus” outside public venues in order to deter anti-social behaviour or crime & to protect & reassure law-abiding members of the community, it is arguably illegal, entirely wrong-headed & potentially dangerous for them to consider parking the same vehicle outside a private residence, with the stated intention of publicly intimidating, harassing or embarrassing the occupants, in particular when they have not been charged & convicted of any offence. 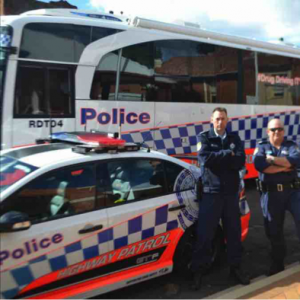 Recently Australians reacted very strongly against proposals advanced by the Prime Minister that a government minister should be given the power to strip dual citizens of their Australian citizenship on the basis of secret intelligence, notwithstanding the fact that the individual had not been charged, brought before a court & given the right to confront their accuser & respond to any allegation of wrongdoing. This attack on the legal & human rights of all Australians has since been withdrawn in the face of overwhelming public opposition.

If it is not acceptable for a federal government minister to exercise powers that effectively destroy the legal & human rights of our country’s citizens, then I certainly don’t think it is right for police to trample on those same rights, whilst arbitrarily taking it upon themselves to play judge, jury & executioner.

While Detective Inspector McNeill’s comments might simply indicate that he was a bit carried-away by the occasion, what is equally interesting is that of the 100 or so members of the community who heard his comments, including representatives of the media, apparently not one elected to question them.

It has been claimed that a singular reason for the lasting success of a democratic society is the robustness of the principles that underpin & govern the behaviour of its institutions in respecting & protecting the legal & human rights of its citizens.

It may be that Detective Inspector McNeill will reflect on his well-intentioned but flawed plans or, if not, that his superiors will?

In the meantime, the rest of us would do well to recall the old saying that “the road to hell is paved with good intentions”.

* John Richardson is a CLA member and prolific writer of letters to the editor, among other contributions to a better society: you can always recognise him by his location: Wallagoot NSW…which is on the far south coast of the state.