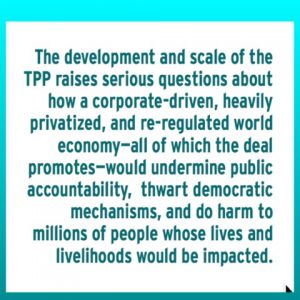 One of the world’s top business schools has dissected the TPP, finding that it would undermine public accountability, thwart democratic mechanisms and harm millions of people…just for starters.

A new report on the Trans Pacific Partnership is raising serious concerns about the “plurilateral, mega-regional” trade deal, with analysis showing that the TPP puts the interests of corporations before the interests of people and core democratic principles.

One of the world’s top 10 business schools, the Haas Institute, has dissected the TPP in three streams – democratic participation, transparency, and public accountability – and finds the TPP is a particular affront to all three key principles.

“The TPP’s nuanced provisions will give corporations the power to evade environmental regulations, bypass national courts and override governments, and control workers’ movements throughout the TPP countries,” the Institute’s media release says.

The study was released on 9 March 2016 by the The Haas Institute for a Fair and Inclusive Society, based at the University of California, Berkeley, in the USA.

“Since the release of TPP text, debate has emerged over whether the trade deal will, in fact, stimulate economic growth and create jobs or violate labor laws and tank the economies of developing nations,” Haas says in its media release announcing the report.

“While these discussions address important concerns, they have also overshadowed the deeper implications of the TPP. If it passes, the TPP would threaten key democratic principles in the United States and around the world.

“The TPP will drastically erode national and international protections for labor, including driving down the wages of US workers by putting them into competition with poorly paid TPP countries’ workers.

“Restrictions on generic medicines will surge the prices of drugs throughout the world, with serious implications on global health and wellbeing.

“These are just a few examples of impacts egregious and large enough in scale to warrant public scrutiny,” the media release says.

The Haas Institute’s report itself says the TPP is the latest and perhaps most egregious extension of the corporatisation of the US economic, legal, and political system.

With political power increasingly modeled on the market-based economy, national governments are selling out the universal representation of the people they serve for the benefit of corporate interests. It is the general public that is left to suffer from such trade and investment agreements, particularly the most marginalised populations.

“As such, countless communities within the US are mobilizing against the approval of the TPP by Congress, with similar movement across other TPP member countries.

“Despite it being cloaked in secrecy for over seven years, advocates, scholars, journalists and the public have already begun to clearly see it for what it is – an agreement that puts the interests of corporations before the interests of people.
Download the report from: http://haasinstitute.berkeley.edu/tpp

BACKGROUND, as explained by Haas Institute for a Fair and Inclusive Society:

On 4 February, Australia, the USA and 10 other Pacific Rim nations signed the Trans  Pacific Partnership (TPP), a massive plurilateral trade and investment agreement that sets rules to which all signatory countries – pending ratification by each – must conform their domestic policies covering financial services, intellectual property, government procurement, internet policy, state-owned enterprises and competition, food and other product standards, safety inspections, and more. The pact is designed as an enforceable regime of trade and investment governance in the Pacific Rim that re-regulates the economic order of signatory nations in Asia, Oceania, and the Americas.

Covering one-third of all world trade, with its signatory member countries producing 40% of global economic output, the TPP is the largest regional trade accord in history. And, because it is designed as a “docking” agreement – open for joining by other countries willing to meet its terms – the initial 12 TPP countries are not intended to be the only signatories.

The TPP is one of two mega-regional trade and investment deals being negotiated simultaneously. The other is the Transatlantic Trade and Investment Partnership (TTIP) – a proposed trade and investment agreement between the United States and the European Union – which is considered to be the Atlantic counterpart of the TPP.

Additionally, negotiations are under way for a major plurilateral sectoral agreement, the Trade in Services Agreement (TiSA). It includes 50 countries from across the world and would cover 70% of the global services economy.

Among the three, the Trans-Pacific Partnership is particularly significant, as it is designed to be the inaugural agreement for the proposed TPP-TiSA-TTIP triad, which would establish binding global rules particularly favorable for multinational and transnational corporations.i