In another of its excellent series, the NSW Parliamentary Library has analysed data for reducing reoffending by prisoners…and come up with some surprising results of what doesn’t work. 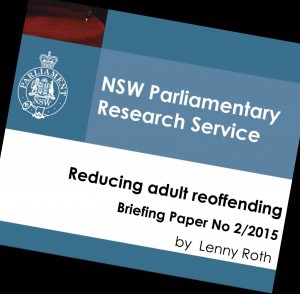 The NSW Parliamentary Library has produced a detailed assessment of what is, and is not, working in trying to rehabilitate people jailed for their crimes. The evaluation should be used to guide prison policy in the state over the next decade, whoever is in power, Civil Liberties Australia says.

The summary comments on Briefing paper No 2/2015 by Lenny Roth are:

Repeat offenders are responsible for a large proportion of crime in NSW; and those returning to prison make up more than half of the prison population. The costs of reoffending to society and the criminal justice system are therefore clear.

Focusing on adult reoffending, this paper seeks to address these four key questions:

(1) Are rates of reoffending getting better in NSW?

(2) What is the evidence about works in reducing reoffending?

(3) What is being done to reduce reoffending in NSW?

(4) What more could be done to reduce reoffending in NSW?

The answer to the first question is: Yes and No.

What works? The Australian evidence on reducing reoffending is fairly limited, although some programs such as drug courts have been shown to be effective.

The international evidence is more developed but there are still many gaps. There is good evidence that certain interventions reduce reoffending: these include interventions targeting drug use, programs addressing cognitive skills, and psycho-social interventions addressing violent behaviour.

What is being done? The NSW Government has a target of reducing rates of reoffending by 5% by 2016 and is currently developing a strategy to reduce reoffending. There are a range of court-based intervention programs, which aim to address the underlying causes of offending.

The programs that have been shown to be effective are: the MERIT program, the NSW Court Liaison Service, and the Drug Court program. There are some alternative custodial sentencing options that target reoffending. In addition, Corrective Services provides a range of programs and services to prisoners, parolees, and persons serving community-based sentences.

What more could be done? Suggestions are made in recent NSW Law Reform Commission reports on diverting people with cognitive and mental health issues from the justice system, and on sentencing.

A Senate Committee report on Justice Reinvestment, an approach to criminal justice pioneered in the United States, is another reform that is worth considering. Further possibilities to tackle reoffending are outlined in recent UK Government strategies, one of which is to adopt “payment by results” schemes in relation to services provided to offenders.

Advice on legislation or legal policy issues contained in this paper – Briefing Paper No 2/2015 by Lenny Roth – is provided for use in parliamentary debate and for related parliamentary purposes. The paper is not professional legal opinion.