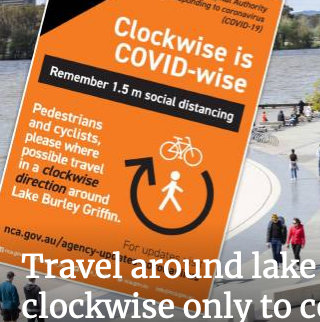 I read it, but I don’t believe it. It has to be a wind-up. The ACT government and the National Capital Authority are purportedly dictating in which direction you should walk. Clockwise only. Around Lake Burley Griffin.

There’s a buried claim in the news story in the Canberra Times that a lowly NCA PR spokesperson says the dictate is only a suggestion. ‘It won’t be enforced, not mandatory’, she indicated.

Ha! Why would you put signs up all around Lake BG if it was not going to be enforced, either this week or in the future?

Surely the promulgation endorsed by the aptly-named ACT Chief Minister Andrew Barr is for next April 1, not this April? Surely a government and the NCA are not trying to tell us to go one-way only, barring half the people from their natural inclinations or perturbations?

What’s next? Will the CM and the NCA command the stars to reverse direction of rotation? Will he and they dictate turning back the tides over the Bateman’s Bay bar? Remember, as Billy Shakespeare warned:

There is a tide in the affairs of men, Which taken at the flood, leads on to fortune. Omitted, all the voyage of their life is bound in shallows and in miseries. On such a full sea are we now afloat. And we must take the current when it serves, or lose our ventures.

I can only assume that one reason Captain Bligh, sorry Barr, has endorsed the rule is to avoid ships – cruise ships – that pass in the night on the lake. His order will make them go round and round, stopping any chance of the Ruby Princess vessel and its virus factory infecting Canberra.

Which brings me to another important point on which I expect Nottingham’s Ian Warden to have a forest of views: we have northern hemisphere dogs, Schipperkes from Belgium: we’re not sure that they or any other un-antipodean dog can cope with going clockwise around.

Or is it the other way around? Do our dogs go down bath plugholes clockwise, or counter-clockwise?

I don’t think this one-way whirly-girdy barring has been well thought through by Pedal Power which, strangely, claims “credit” for producing the idea of ordering people how to behave. You’ll remember they were the first instigators of the 1.5m “social distancing” rule: when travelling at 60kph, drivers must keep 1.5m from them on the roads.

There is no reverse rule. Which is why our earlier Schipperke dog was killed in a collision with a cyclist doing close to 60kph – well over 40 anyway – at the bottom of a long downhill run on a foot (and bike) path. Unfortunately, the cyclist lived with just a few scrapes.

Just this Thursday, being very leery due to that earlier doggy death, my wife and I stood well aside – with our two dogs on short, tight leads – from a shared path so an orange-clad older gentlemen with whiskers astride a burly bike could shoot through. Did we get a word of “Good morning” or ‘Thank you” for our courtesy. Not on your Nelly! In our twice-a-day experience of sharing paths, about 10 per cent (1 in 10) of cyclists in the ACT are among the rudest people on earth.

Perhaps Pedal Power should be running courtesy lessons for cyclists rather than coming up with orders for walking people on which way to go.

Which brings to mind a question of how so many bikes are whooshing around the lake anyway: they must be travelling a long way from their homes to get there. Maybe the police should pull them over and send them back to their own neighbourhood, where they are supposed to be remaining in lockdown.

But back to lake’s circumnavigation. Most sensible navigators choose their direction of travel based on the prevailing wind. People who want to walk only halfway around the lake would usually choose the downwind direction, and then make their way back to the starting point sheltered by buildings or trees. Not any more: they’re now Barred from having a choice of which way to walk.

And all that right-turning of bodies and bikes may disturb the ions in the air and water, and could create tornado-like spouts. This latest Barr and NCA circular is fraught with weather danger. It’s the reverse of the much-rumoured 5G microwave effect, and is certain to addle your brains.

Perhaps there’s a deeper party political significance in the move, given that the Labor Party has just abandoned its ACT Branch annual meeting so that party members can’t put forward motions to the national party bang-up later in 2020. This circulating ultimatum could of course be Barr’s bid to split party factions: does the new rule mean that left-leaning members and branches are effectively silenced because they can no longer move counter-clockwise?

Some wag suggested this had to do with coronavirus. But I’ve seen those photos: the virus has spikes all over, and it would make not a jot of difference to its clingability to your throat whether you are going clockwise or counter-clockwise, upstream or downstream.

Unfortunately, this clockwise dictate is one of the early emanations of what will become commonplace now that Executive governments have learned – due to the national “Cabinet” – they can ride roughshod over, or indeed around, the people who elected them simply by issuing central commissariat orders.

The sooner we get back to Parliaments sitting the better. Without parliamentary democracy, we get Executive idiocy and senseless intrusion into our normal rights and freedoms. Nothing illustrates that now-and-future loss of civil liberties more than being told which way to walk.