The various Australian state, territory and federal police agencies investigating their own has long been understood to be problematic.

NSW Greens MLC David Shoebridge last year exposed NSW police as having paid out over $24 million in relation to misconduct civil actions over the 12 months 2019/20.

However, it’s unclear as to whether individual officers are being adequately sanctioned over these incidents.

Public outrage boiled over in June last year, when footage emerged of a NSW police constable slamming a 16-year-old First Nations boy head first onto the ground in a Surry Hills park. Yet, police commissioner Mick Fuller was comfortable in putting this down to the officer having “a bad day”.

Then there was the high-profile case of a 19-year-old woman who was unlawfully strip searched at a 2019 Sydney festival. The complaint resulted in a 9-month internal investigation, which involved an officer resigning. But no one bothered to inform the victim or her family about the outcome.

Currently, ever-vigilant rights group Civil Liberties Australia (CLA) is renewing its calls to end the nationwide system of police investigating police (PIP), which, it asserts, involves one set of penalties for civilians, while for law enforcement, punishment is often a slap on the wrist, if that.

Beyond benefit of the doubt

“Police give police the overwhelming benefit of the doubt – and then some,” CLA chief executive Bill Rowlings made clear. “This is in any situation where they’re tasked to report on the behaviour of fellow officers.”

“This includes rape investigations, when police shoot or stun gun someone, or when they fail to act quickly or appropriately, which happens a lot in domestic violence cases,” he told Sydney Criminal Lawyers.

The protection of fellow officers can go on for years, according to Rowlings. This is especially so in terms of domestic violence, where a partner subject to abuse can be left with no legal recourse, as officers simply won’t believe that “such a good bloke” could perpetrate these crimes at home.

The civil liberties advocate further points out that there’s at least one report every month outlining the “outrageous behaviour” of an officer, or a group of them, that’s either gone unpunished internally, or the sanctions applied are so weak that it undermines justice being served. 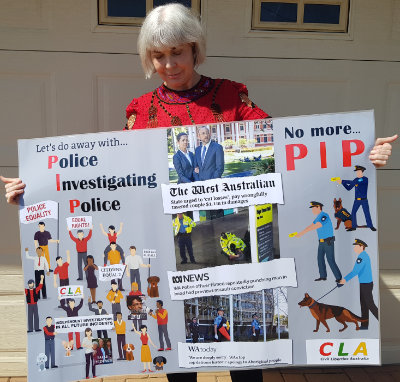 As an example of how police internal investigations are dramatically failing the public, Rowlings raised last month’s revelations that involved the disciplining – if you can call it that – of Queensland detective senior sergeant Chris Fenelon over his bungling of a serious rape investigation.

The brutal gang rape is alleged to have taken place on a woman’s 21st birthday in 1995. She reported it at the time, but charges weren’t laid until 2019, following a new investigation that found Fenelon had botched his initial three day inquiry in multiple ways.

“About five years ago, the allegedly raped woman complained to the internal Ethical Standards Command of Queensland police that the case had not gone ahead,” Rowlings outlined. Although, Fenelon was by this stage, a senior officer in the standards unit and the matter was dismissed.

Following a further complaint to an oversight body, the new inquiry resulted in three men being charged. But Queensland police still refused to detail the disciplinary action taken against Fenelon. And after its hand was forced, the agency then revealed it had fined the now retired officer a total of $677.

The Law Enforcement Conduct Commission was established in mid-2017, as the sole NSW police watchdog.

By early 2018, the LECC reportedly weren’t able to deal with a number of matters due to funding, so these cases were being handed back to NSW police for internal investigation.

The issue with state independent police oversight bodies, Rowlings notes, is that “the first investigation is always by the local police themselves”, and as they operate under a mafia-style code of silence, officers are reluctant to testify against others, and those who do are often ostracised.

Civil Liberties Australia is calling for a new system, whereby qualified speciality officers from other jurisdictions would be brought in to inquire into medium-level and major misconduct incidents, so it’s no longer a situation involving mates investigating mates.

As to whether criminal or civil action is recommended following the external inquiry, CLA suggests that this should be down to “a group comprising of the external investigating police, an independent lawyer and a civil liberties or human rights representative”.

In terms of how the local police force implicated in the matter and the state police association should be responding, Rowlings maintains that they “should be barred from making any comments on the matter before the investigations are completed and a report is released publicly.”

Paul Gregoire is a Sydney-based journalist and writer. He has a focus on human rights issues, encroachments on civil liberties, drug law reform,