Control of science and research in Australia now vests in the Department of Defence, which has a veto over communication and collaboration by Australian scientists with their overseas counterparts.

Its official! The Department of Defence now controls most cutting edge research in Australia, with a censor’s right to ban international communication and collaboration.

The sorry state came to pass when the Defence Force Trade Controls Act came into force on 2 April 2016.

Despite increasing criticism from a small but growing sector of the Australian scientific and research community, the bill has now become law. 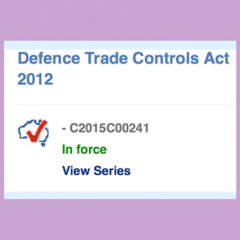 The DTCA represents two of the worst aspects of Australian life over the past decade or so:

The miltiarisation is obvious: the Department of Defence now possesses a legislated power of veto. The “control” of the act’s title covers any and all communication, collaboration and global cooperation between Australian scientists and researchers and their counterparts anywhere else in the world.

The Defence “control” extends even beyond the formal power. Scientists must second-guess what Defence may or may not consider “dual use” technology research. “Dual-use” can cover everything from designing a better can opener to mobile phone encryption: DoD uses can openers and mobile phones.

The list of what Defence thinks may be covered is so long it runs to 70 pages. It covers everything from fighter aircraft component technology to viruses like Zika (which is not actually named in the act, which was drafted originally about five years ago, hence the ‘2012’ at the end of the act’s official name.).

A host of other viruses are contained in the 70-page list: any medical researcher who wants to email or phone a colleague overseas to discuss a theory about any of these viruses now needs Australian DoD approval, in advance, before dialing the number. Same goes if the Australian researcher wants to present a paper to an international conference.

The law has been imposed on Australia at the request of the USA. But the Australia law goes beyond similar laws elsewhere.

The UK and the USA have similarly-named acts to safeguard their research. But both countries understand that science and research is fueled by information exchange and communication. Their laws have sensible provisions allowing the research community to function internationally: the new Australian law has no equivalent provisions.

Their absence comes despite Defence and the politicians being told countless times that the proposed – now in place – legislation was draconian and would be counter-productive. The DTCA will curtail research in Australia, drive Australian scientists and researchers overseas, and run entirely contrary to the “flexible, clever” country the Prime Minister, Malcolm Turnbull, is trying to engineer.

The new law also curtails liberties, rights and freedoms. Traditionally, scientists and researchers have enjoyed the civil liberties of being to exchange information subject only to their common sense in not imparting secrets internationally that should not be shared.

Now, not only are their customary liberties constrained and curtailed, the freedom of speech they possess, which has been endorsed by the High Court of Australia, is now subject to DoD control. They can speak about their work internationally…but only if and when and how and where the Australian Defence Department approves.

Even worse, they have to anticipate what OzDoD might be wanting to restrict in terms of their freedom to communicate. They have to notify the Department in advance, so DoD can deliberate and decide whether to allow Australia’s brightest minds to speak. You can imagine the DoD decision being made by a Grade 2 clerk, a person so risk averse that a researchers’ communicating the time of day in Australia to an international colleague would comprise an unacceptable security risk.

The ultimate outcome is blatant censorship with a further protective blanket of uncertainty. The burden of identifying what Defence might be interested in is laid on the scientists and researchers. That approach leads to self-censorship of the very worst kind.

The DTCA, as passed into law, has no place in Australia. Eventually, the Australian government will have to re-write the law into sensible legislation like equivalent laws in the UK and the USA. But, a number of scientists and researchers – probably dozens but maybe hundreds or thousands – will have to suffer before Defence and the government come to their senses.

Civil Liberties Australia would like to hear – anonymously if needed – from any scientists and/or researchers who run foul of this fetid new law.