Australians with intimate knowledge of our sleazy dealings over oil reserves with East Timor are delighted the Labor Party has announced a change in policy. John Martinkus explains why.


East Timor is mad as hell, and it’s our fault 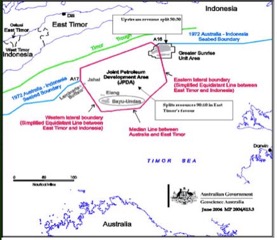 In 1995, as I squatted for days in a hole in the jungle of East Timor with 12 men hiding from Indonesian troops patrolling nearby, the whispered conversations between the Falintil Guerrillas and myself turned to oil.

We had plenty of time to talk, admittedly very quietly to not alert the Indonesians of our presence — they sometimes came so close we could hear their boots in the undergrowth.

The issue of the Timor Gap treaty came up. They were having a bit of a go at the foreigner in their midst, whom they were then protecting with their lives so I could get a story. A story at the time I wasn’t even sure I could sell.

Australia had signed the Timor Gap treaty with the Indonesians way back in December 1989, dividing up the resources that lay between East Timor and its nearest international neighbour, Australia, and those resources were mostly a giant oil reserve. Australia got a great deal, with the line dividing what oil would belong to Indonesia and what oil would belong to Australia significantly favouring Australia. Indonesia went along with it mainly to guarantee Australia’s ongoing support for its occupation of East Timor, which it had maintained internationally since the 1975 invasion.

Australia was the only country in the world to recognise Indonesian sovereignty, and the Timor Gap treaty that gave us the majority of the oil was our pay-off for ignoring the atrocities carried out on our doorstep by the Indonesian military against the East Timorese.

The 12 guys sitting in that hole in the jungle, armed with a few captured M16s and old Portuguese weapons left over from the colonial army and a tarpaulin and some bushes the only protection against the hundreds of Indonesian troops searching for us, knew that. They knew Australia, on both sides of politics, had screwed East Timor.

We all know the story from there. The UN got involved after Suharto was ousted in 1998. The independence ballot was held, and the Timorese voted overwhelmingly in favour. The Indonesians burnt, looted, killed and displaced at least a third of the population.

Outrage in Australia, but more importantly, pressure from then-US president Bill Clinton to clean up the mess he had helped create forced the hapless John Howard to send in a peacekeeping force led by Peter Cosgrove, now Australian Governor-General. We, Australians, were greeted as liberators and cheered in the streets still littered with the corpses of the victims of the Indonesian rampage in a city still burning with fires lit in revenge by the retreating occupiers.

I was there, and suddenly, after years of working in that country, I felt proud to be an Australian.

Fast forward to 2016. Last month, 10,000 East Timorese protested against the unfair maritime boundary, which gives Australia the lion’s share of the oil in the Timor Sea, outside the Australian Embassy.

Dili is a small town. Protesters blocked the road to the airport and all the regions to the west of the country for hours. They were peaceful. They know how to demonstrate; they have a lot of experience. They were protesting about the oil deal and Australia’s refusal to revisit what we know has always been an unfair agreement.

This week, Labor foreign affairs spokeswoman Tanya Plibersek finally addressed years of Australian hypocrisy. Australia has always lectured other countries on human rights issues, on following international law, on being responsible global citizens. But, on Timor, we never practised what we preached. In a refreshing gust of common sense and decency the ALP finally changed its policy on Timor, the oil and the agreement.

As Plibersek put it in her statement:

Timor-Leste suffered decades of war and starvation before gaining independence. Australia played a key role in securing that independence –a proud moment for our nation. But the maritime boundary dispute has strained relations with our newest neighbour. Australia’s unwillingness to commit to maritime border negotiations with Timor-Leste has raised valid questions about our commitment to a rules-based international system and to being a good global citizen. This must change.

Labor in government will immediately commence discussions on a voluntary, binding international resolution for a permanent maritime boundary between Australia and Timor-Leste. It is in the national interest of both countries that we do so. And importantly, by committing to freely participating in it, Labor’s proposal is in the interests of the international system itself.

We are seeking to end more than 40 years of uncertainty over a maritime border, and committing to international norms that we expect others to follow”.

Finally, a mainstream Australian politician has come out and said what has been painfully obvious for so long. Australia has bullied, lied, spied on and used our own military as leverage to secure an inequitable deal over the resources that lie between Australia and East Timor.

First we did it by coalescing and turning a blind eye to the Indonesian invasion and subsequent atrocities, right up until 1999, and some would argue, after. Both Labor and Liberal governments did that for 24 years.

Then when East Timor got independence we basically wrestled them into a deal that massively favoured Australian companies and the Australian government in terms of revenues. We stole the oil. It is well documented, the spying on negotiations, the pressure applied to Timorese politicians to sign a deal they knew was unjust. The relentless pursuit of journalists and whistleblowers involved in the negotiations by federal authorities.

We bullied one of the poorest countries in the world into accepting an unfair deal. They took it because, at that time, they were broke, and we knew that and used that against them.

It is no wonder 10,000 of them turned up to the Australian Embassy in Dili to protest against this. They may be poor, but they are not stupid. That is the lesson I learnt all those years ago back in the jungle.

They may have had no shoes and had not eaten for a week and lived hiding in ditches from Indonesian troops (US and Australian supplied and trained at the time) trying to hunt them, but they could quote the agreements made internationally to deny them of their natural birthright with more accuracy than diplomats, journalists and academics.

The right to the resources of their country is in their blood, and at last Plibersek has acknowledged that.