How constrained are public servants in expressing their private opinions in the lead-up to coming elections? Perhaps not as free from restraint as you might think, says John Wilson. 15 April 2016

Is speech free in the PS?

With two elections** forthcoming in Canberra this year, it’s worth commenting on the ability of public servants to speak their mind on political matters.

** Both the ACT and federal jurisdictions will hold elections in 2016.

Since I wrote about this topic last year, there have been two noteworthy developments.

In December, the Federal Court delivered judgment in a challenge by an Australian Army Reserve major, Bernard Gaynor, against the termination of his commission. Gaynor had repeatedly made comments critical of homosexuality and Islam, alongside attacks on Defence Force policies and practices.

For example, in January 2013, he tweeted: “I wouldn’t let a gay person teach my children and I am not afraid to say it”, while later he issued a media release titled “Defence shows hypocrisy with gay officer”. 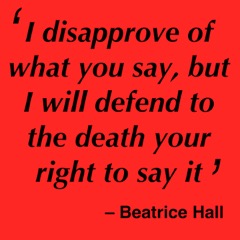 Gaynor even lodged a complaint against the Defence Force for permitting other personnel to march in uniform at Mardi Gras, and continued to make public comments despite being instructed by a commanding officer to cease “intemperate or inflammatory remarks on social media”.

He was eventually issued a termination notice, to which Gaynor mounted a strident response: “I note that logically this means the ADF has a hierarchy of members and that homosexual and Islamic members have more right to be offended than Catholics.”

Following the termination of his commission, Gaynor challenged the decision on administrative and constitutional law grounds. While the former failed, Gaynor succeeded on a freedom of political communication basis.

The Defence Force had submitted that a burden on free speech was justified because it was directed towards the maintenance of the chain of command, the avoidance of danger to military personnel and the protection of its reputation. Such reasons are not dissimilar to those proffered in a public sector context: the efficient operation of government and the preservation of an impartial and neutral public service are often cited as reasons to restrict the political communication of APS employees.

Justice Robert Buchanan had little sympathy for these arguments in the broad form presented – they were “essentially speculative” and “the same may be said of any comment of the same kind from any source”. Instead, the decision turned on whether Gaynor’s commission was terminated because of his comments, or because he made the comments in connection with his service (in which case his termination might have been defensible, especially in light of an explicit direction to remove material linking his comments to the ADF).

Buchanan observed that Gaynor’s statements “were made while the applicant was not on duty, not in uniform and not doing anything connected with the ADF except criticising it and certain of its members”. While accepting the need for “discipline, obedience to orders and adherence to [ADF] standards”, particularly by full-time personnel, Buchanan concluded “the applicant’s commission was terminated because of the publication of his private views about political matters”.

As there was insufficient connection “with any legitimate legislative aim to displace the freedom of political communication implied in the constitution”, the termination was set aside. The Defence Force has lodged an appeal, which will be heard by the full Federal Court in May 2017, and the matter seems destined for an eventual airing in the High Court.

In light of Gaynor’s success, the Public Service Commission issued updated guidance in its final newsletter of 2015.

Admitting that the current legal position is unclear – “this is an evolving area of the law that attracts considerable attention” – the commission identified the conflict at the heart of this topic. “The commission’s guidance on this question asks employees not to do, or say, anything that might cause a reasonable person to question their ability to serve the government of the day impartially,” it said. “At the same time, employees have a right to a private life.”

The appropriate balance to be struck between these competing principles has been considered twice in the past decade or so, in Bennett v President, Human Rights and Equal Opportunity Commission and Banerji v Bowles.

In the former, a regulation restricting APS employees’ ability to disclose official information was invalidated on free-speech grounds; in the latter, a public servant facing disciplinary action after publishing tweets critical of departmental policy lost her application for interlocutory relief.

While Gaynor’s case is distinguishable from Bennett and Banerji – service personnel are not employees and distinct considerations arise in the military context – its final outcome may have broader implications. In the interim, public servants are advised to tread carefully when commenting publicly – on social media or elsewhere – about sensitive political matters.

This is hardly a satisfactory position, and it can only be hoped that the Gaynor appeal brings clarity (although a case involving an APS employee will probably be needed before the situation is resolved definitively).

Public servants should enjoy in their private life the same protections from encroachments on their ability to speak freely as every other Australian. While some legitimate exceptions may arise on matters connected to their (public sector) employment, these should be “carefully contained and fully justified”.

When I last wrote on this topic, I quoted a Canadian judge, cited in Bennett, to the effect that “public servants cannot be … ‘silent members of society’ “. That sentiment is worth repeating.

Many would think Gaynor’s comments were deeply offensive and the Defence Force had strong justifications for terminating his commission. Yet as English writer Evelyn Beatrice Hall once noted (in an observation often misattributed to Voltaire), “I disapprove of what you say, but I will defend to the death your right to say it”.

Offensive or not, public servants should be given ample room to speak their mind on political matters. Continued uncertainty in this area of the law reflects poorly on the state of political communication in Australia. With impending territory and federal elections, that should be a cause for real concern.

John Wilson is the managing legal director at Bradley Allen Love Lawyers and an accredited specialist in industrial relations and employment law. He thanks Kieran Pender for his help in preparing this article. john.wilson@bradleyallenlove.com.au   This article ran first in the Public Sector Informant, a monthly publication of the Canberra Times aimed at the federal Public Service. http://tinyurl.com/hrp32c7