Skip to content
The Age newspaper is speaking out about the real threat to Australia – weak politicians. Its editorial explains that rights and liberties are not niceties, but are what makes Australia.

By what measures should we judge the strength of a nation? On the basis of the economy, perhaps? The ability to accumulate personal wealth, to participate fully in the workforce, the enhancement of opportunities? Or through sporting achievements? Is it measured by the liveability of its cities or the warmth of its people?

No, there is something far more vital. A nation should be judged, first and foremost, by its adherence to human rights and its respect for personal liberties, for that is what will provide its people with the best opportunities for advancement.

Australia generally has a strong record in that regard. Our institutions are designed to protect our civil and political rights, and this is generally a nation of good people, who respect the rule of law and participate vigorously but fairly in the democratic process.

We like to believe that we are a just people, open and honest, that we uphold the spirit of fairness and that we look out for each other. But some of the policies implemented by federal or state governments in recent years have undermined Australia’s reputation as a progressive nation that upholds the highest standards of human rights. 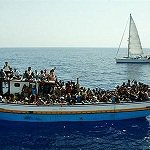 On the treatment of asylum seekers, on the many appalling aspects of social and economic disadvantage affecting Indigenous Australians, on mandatory sentencing and imprisonment of juveniles, on broad and overly restrictive laws that are designed to counter terrorist activities but have compromised personal liberties, on depriving dual nationals of their citizenship if they are suspected (not found guilty, mind you) of terrorism, Australia is going backwards.

Much of this is spelt out in Human Rights Watch’s latest global report, which describes Australia’s policies on asylum seekers as “abusive”. Its checklist of what happened last year in the border control and immigration portfolio would be laughable – fit for a dysfunctional Lilliputian kingdom – if it were not, in fact, so terribly real.

Recall that the government paid the crew of a people-smuggling boat $US30,000 to turn the vessel back to Indonesia. Last week, an Indonesia court found that action – the payment by Australian officials – proved that the crew was profiting from people-smuggling.

There were multiple reports of sexual abuse and assaults of detainees at Australia’s immigration centre on Nauru, but medical practitioners and aid workers were barred from speaking out. And then the government manipulated reports of such abuse by wrongly suggesting Save the Children staff were “coaching” asylum seekers.

Then there was the government’s disgraceful, concerted attack on the independent Human Rights Commission president, Gillian Triggs, who released a report highlighting hundreds of reports of assaults on children in detention, including dozens of sexual assaults, self-harm incidents and psychological damage.

There are still 91 children in detention, including 68 on Nauru. Of the 1792 people in immigration detention centres at the end of December, more than half (56.4 per cent) have been held for over a year and almost one-in-four have been detained for more than two years.

Australians prefer to believe they look out for the most disadvantaged members of our community. But there is an increasing disconnection between the high standards the nation professes to pursue and the contemptuous policies implemented by governments that have the effect of eroding human rights or denying our obligations under international law.

Australians cannot afford to lose sight of the values that make us great people. Reports, such as this one by Human Rights Watch, provide a broader and much-needed perspective. They highlight how human rights too often are compromised by elected officials whose eyes are fixed on the short-term political cycle.

This item appeared first as the Editorial – the newspaper’s opinion – in The Age on 29 Jan 2016. Civil Liberties Australia says: Well said, The Age.

To read the editorial online: http://tinyurl.com/jj6rqyj