The government is about to pressure MPs to ratify the TPP trade agreement: they should not do so, because we have two years to make up our minds.

In the February 2016 session of the Australian Parliament, the government will put enormous pressure on MPs to ratify the Trans Pacific Partnership…but they should resist.

There is no rush; Australia has two years before it has to make a final decision, even though formal signing of the agreement is on 4 Feb.

Australia should wait because, only now, the inherent flaws in the TPP agreement are becoming public. The reason is that independent analysts have at last had time to go over the agreement in fine detail. The result is underwhelming…by a huge margin.

And remember, all the positive TPP spin depends on using secret modelling that will be based on the best possible outcomes for the proponents.

Dean Baker, co-director of the Center for Economic and Policy Research, in a post on Medium, has exposed the ‘model myth’ sold to the public by the TPP’s boosters, according to Glen Moody, writing on techdirt.

One of the most serious (problems) is something we’ve noted before, Moody says: despite attempts to present them as otherwise, the predicted gains are extremely small. Baker explains this well:

The study’s projection of a cumulative gain to (US) GDP of 0.5 percent by 2030 implies an increase in the annual growth rate of 0.036 percentage points. This means that if the economy was projected to grow by 2.2 percent a year in a baseline scenario, it will instead grow at a 2.236 percent rate with the TPP, assuming the Peterson Institute projections prove correct. 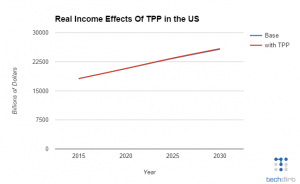 Another analysis of TPP comes from a very different quarter: the New Zealand government, as part of the formal process of ratifying the treaty. Even though the document runs to 279 pages (pdf), relatively few of them are devoted to how the modelling results were obtained, and how plausible they might be. The independent team behind a new “expert paper”, part of a series exploring many aspects of TPP from a New Zealand viewpoint, was not impressed by what it found there (pdf):

[The writers in the expert group] found that the standard of documentation of the modelling is dreadfully inadequate — just 20 pages of text in the published report. The authors [of the New Zealand government report] should have chosen, or been asked to present, a much weightier and more detailed account of every facet of the data, assumptions, modelling and results.

Not only is the methodology poorly explained, but the results are underwhelming too. The official predictions of economic gains for New Zealand are summarized as follows by the team of economists:

The government has used modelling to derive estimates of the economic benefit for New Zealand and estimated an increase in real GDP of 0.9% by 2030 or $2.7 billion annually. The increase is modest. A continuation of currently forecast levels of growth would mean that NZ GDP would be 47% higher by 2030 without TPPA, versus 47.9% with TPPA.

Moody says the appearance of these new studies, together with those published before, underlines the fact that, whatever the source, it seems impossible to find any compelling economic justification for signing up to the agreement, since the gains are so pitiful – and that’s without including possible costs, which are never discussed.

That this is only now becoming incontrovertible, in the wake of the publication of the TPP text (late) last year, also shows why all the key documents should have been released as they were written in order to allow this kind of in-depth analysis to be conducted and debated as the talks proceeded. Not, as is happening currently, just a few days before the official signing ceremony on 4 February 4 when it’s a bit late to do much about it.

Note: While the formal signing by the 12 countries involved in the TPP is in NZ on 4 Feb, the countries have two years to consider ratification before making a final decision.

In other words, there is no need for the Australian Parliament to rush the process of ratifying: it can wait until early 2018.