There are lessons worldwide to be learned from Wrongful Conviction Day, held this month: here are 10 from Toronto in Canada, most of which apply here.

Learning to avoid getting it wrong 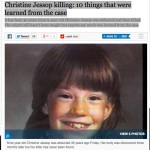 Nine-year-old Christine Jessop was abducted 30 years ago last month in Canada, and her partially clothed body was found three months later in a wooded area 50 kilometres from her Queensville home north of Toronto.

Her homicide remains unsolved, although it did lead to the wrongful conviction of her 25-year-old next-door-neighbour, Guy Paul Morin, and a profound shakeup in thinking in the Ontario legal community. Morin was eventually cleared and freed because of improvements in DNA testing, after two trials and 18 months in jail.

Here are 10 things experts say were learned from the Morin case:

1) The dangers of tunnel vision.

Police were sharply criticised for quickly fixating on Morin because they considered him an oddball.

“We learned that wrongful convictions most often occur when somebody is an outlier — someone who seems strange to the rest of us; a loner; part of an unusual family; a ‘weird type guy,’ as one of the police investigators so artfully described Morin in their notes,” says award-winning author Kirk Makin, whose 1992 book Redrum the Innocent remains the definitive work on the case.

2) The dangers of “demeanour evidence.”

Morin was criticized for what were considered inappropriate facial expressions and the fact that he didn’t search for Jessop’s body or attend her funeral. Makin calls this drawing conclusions based on “whether someone looked or behaved the way ‘we’ expect them to under certain circumstances.”

3) The need to be skeptical of “experts.”

4) The need to take a broad look at the system and wrongful convictions.

The Guy Paul Morin Defence Committee morphed into the Toronto-based Association in Defence of the Wrongly Convicted (AIDWYC), which has championed the causes of several prisoners who have proven to be wrongly convicted.

A commission headed by Fred Kaufman, a former Quebec Court of Appeal judge, looked deeply into the institutional conditions that made the Morin conviction possible and made sharp recommendations to improve things. “The Morin case led to the creation of AIDWYC,” Makin says. “It was formed out of the Guy Paul Morin Defence Committee, whose members decided there were too many systemic problems not to create something more permanent. That’s a hell of a legacy in itself.”

The wrongful Morin conviction is often mentioned in the same breath at the wrongful murder convictions of Canadians Donald Marshall and David Milgaard. The “Three M” cases “were a cold water shower for anyone who thought that when someone is arrested, the police must know they did it,” Makin says. “It was hopefully a crash course in the lengths to which lazy/inexperienced/over-heated/crusading police will go to get a conviction when they become convinced that somebody is their man.”

5) The need for police not to bond too tightly with a victim’s family.

“We learned that police have to make some effort to keep a victim’s family as a discreet distance from the investigation, lest officers be influenced by their lobbying and personal beliefs, and lest they feel a compulsion to make a premature or ill-considered arrest,” Makin says.

6) The dangers of jailhouse snitches.

Kaufman pulls no punches in the chapter of his report that centres on jailhouse informants, and how the Crown used their words to buttress the false case against Morin.

7) The realisation that prosecutors are capable of misconduct.

“Their relationship with the police at times blinded them to the very serious reliability problems with their own officers,” Kaufman writes.

8) The dangers of withholding evidence.

Fibre evidence that supported Morin’s case was not provided to the court by the Centre for Forensic Sciences. Then the fibre evidence was incorrectly summarised in the Crown’s closing address.

9) The dangers of cutting a deal to avoid trial.

10) The need for full and accurate records of interviews with witnesses.

“Hours of untaped interviews might be reflected in a single entry in a notebook or in an incomplete précis or description of the interview contained in a supplementary report,” Kaufman wrote.

NOTE: These are lessons that should be applied to cases in Australia. In particular, the Sue Neill-Fraser wrongful conviction in Tasmania would benefit from a fresh hearing with most of these points in mind – Ed.