Northern Territorians may have more options to cast pre-poll and postal votes and won’t have to ‘run the gauntlet’ of how-to-vote card spruikers under proposed changes to electoral laws. 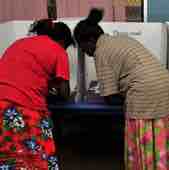 Chief Minister Adam Giles is championing a bill to give voters more freedom of choice in how they cast their vote to encourage more Territorians to participate.

“The Australian Bureau of Statistics suggests that the current electoral roll captures only about 81.6% of the eligible population in the NT; of those enrolled, only 76.9% participated in the 2012 general election,” he said.

“Electoral Commission data shows that 3.2% of the votes cast at the 2012 election were informal and the informal vote rates were highest in remote and regional parts of the NT. For example, the electorate of Namitjira had a voter turnout of just 59.8% and an informal rate of 4.7% in the 2012 general election.

“These proposed amendments are aimed at reducing informal voting and increasing voter participation by providing voters with more flexibility in how they can vote.”

The Giles bill would change the Electoral Act to:

Mr Giles said the increased flexibility for pre-poll and postal voting was designed to make it easier for busy Territorians to vote. “These changes mean that those who make plans on election day are not restricted to remaining in their electorate to vote. If you know you are heading out on to the water for a fish, going camping, playing sport or attending an event away from home, you can head to a pre-election polling centre and cast a vote.”

He said the Electoral Legislation Amendment Bill would be debated in 2016, giving the public and MPs time to consider the amendments and make comments or suggest changes.

“There have been a number of reports into electoral laws in recent years and addressing many of these issues will take time, and require further discussion and research,” he said. “That’s why the NT Government has chosen to move ahead with a limited number of amendments that focus on having as many eligible people as possible enrolled and participating in an election.”

Feedback can be provided at www.haveyoursay.nt.gov.au/electoralact