Rallies against refugees are hijacking the images of Anzac in an illogical bid to connect fighting for freedom with rallying for partisanship, says Honest History’s David Stephens.

Anzac is being hijacked

Small ‘Reclaim Australia’ rallies in a number of centres recently were notable for featuring Anzac-related slogans and flags, according to historian David Stephens*. 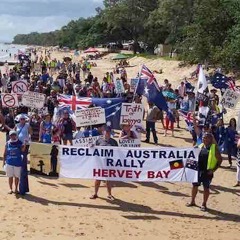 At Melton, near Melbourne, Reclaim Australia demonstrators carried a banner bearing poppies, silhouettes of marching troops and the words “Lest We Forget”. In Brisbane, there were “Anzac” tattoos on bare chests. In Canberra, a banner included a picture of an Anzac monument.

None of this is to say the Reclaim Australia folk are capable of presenting a sustained argument as to how what they are doing is related to some concept of Anzac. Their appreciation of this link is probably about as deep as their understanding of their favourite chant, “Aussie! Aussie! Aussie! Oi! Oi! Oi”, which is pinched from the “Oggy! Oggy! Oggy!” used by girl guides and Welsh rugby crowds.

But the linking of Anzac with bigotry goes back to at least the Cronulla riot of 2005 and probably much further than that. “Anzac” for some people seems to have become part of the paraphernalia of being white bogan Australian, like thongs, football shorts, bum cracks and beer.

This is, of course, regrettable but it may be an inevitable result of the way we slather a version of Anzac across parts of our lives, from football matches to firefighting, where it is not relevant.

Anzac has become Anzackery, a caricature, and we have hardly noticed the slide.

* Stephens was quoting from an article in the Canberra Times, ”Rival protesters clash in fiery exchanges,” 23 November 2015, p4). He is one of the main convenors of Honest History, a movement and website aiming to remove the bombast from military bomb-blast coverage relating to over-emphasised celebration of one aspect of Australia’s endeavours.  He is also a former Commonwealth public servant, consultant and lobbyist with post-graduate qualifications in political science, law and French.